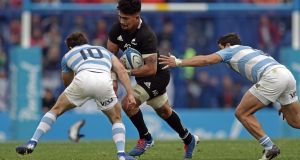 All Blacks captain Kieran Read has moved swiftly to quash the idea that he might be the solution to New Zealand’s blindside flanker problem as they look ahead to the Rugby World Cup.

The 33-year-old Read made his Test debut in 2008 against Scotland in the number six jersey but has made only one other appearance as the starting blindside flanker in his 117 other Tests since.

Read has played 109 times for the All Blacks as number eight and told reporters ahead of Saturday’s Rugby Championship clash with South Africa in Wellington that he would be happier staying at the back of the scrum.

“I would do whatever for this team but right now it’s at number eight,” Read said on Friday. “I’m excited to be playing there. That’s the role I want to be playing. That’s where I see myself and get the best out of myself.”

The hard-running Liam Squire looked to have the inside track for the role, but missed most of Super Rugby through injury and made himself unavailable for the Rugby Championship.

Hansen on Thursday all but ruled out bringing back the 23-Test flanker, saying it was unlikely he would be available for the Bledisloe Cup match with Australia in Auckland on August 17th.

Shannon Frizell has been named to start the match against the Springboks as he battles with Vaea Fifita, Luke Jacobson, Dalton Papalii and possibly Jackson Hemopo for the role in Japan.

Fans and pundits, however, have suggested that with Ardie Savea in the form of his life, Hansen should select the 25-year-old Wellingtonian at number eight with Sam Cane at openside and Read on the blindside.

Savea, normally an openside, played number eight last week against Argentina and was considered among the strongest performers for an understrength All Blacks side in the 20-16 victory.

Hansen refused to definitively rule out the suggestion on Thursday, stating people would “have to wait and see” what the future held, something his captain echoed on Friday.

“We’ll see what happens later in the year,” Read said. “I could switch easily. It wouldn’t be too hard. But I’m just excited to be on the track for the first time this year in the black jersey.”

South Africa captain and number eight Duane Vermeulen was nowhere near South Africa’s surprise victory against the All Blacks in Wellington last year, sitting in Japan and watching the Test on television.

On Saturday the 33-year-old will, however, become the 62nd Springboks captain in a game that will likely decide the title in this year’s truncated competition.

“It’s a massive task, it’s an honour and such a privilege to captain the Boks and there’s only a few guys that have ever done it,” Vermeulen told reporters.

“I think I’m number 62 so it’s not a lot in the South African history of the game so it’s a nice thing, but obviously you’ve also got to play the game so in a way there’s a bit of emotion but it’s controlled emotion.”

Vermeulen missed last year’s Rugby Championship because he said he needed a break from the game after three years in France and wanted to make sure he was in top condition for this year’s World Cup in Japan.

Having just transferred to Japanese club Kubota Spears, he watched the Springboks’ 36-34 upset of the three-times World Cup winners at Wellington Regional Stadium, with a couple of South African friends.

“It was a fantastic game to watch, tries all round, as a spectator it’s fantastic to see two teams go head on and not holding back,” Vermeulen added of last year’s match.

“I think as a supporter at that stage it was great to see South Africa get one up over New Zealand.”

The bullocking number eight felt what happened last year would have little bearing on the outcome on Saturday, with both teams trying different players and combinations ahead of the World Cup.

Both the All Blacks and Springboks will have just three players starting on Saturday from their line-ups that took the field in respective wins over Argentina and Australia last week.

Hansen and South Africa coach Rassie Erasmus have already said it would be an opportunity to test things ahead of the global showpiece.

“I think both teams are looking forward to this game preparation wise to see what the guys can deliver,” Vermeulen added.

“Last week, maybe tried out a few combinations and see who are the guys that are sticking up their hands and want to compete for a position for the World Cup.