Owen Doyle: Rugby will have a high price to pay if it doesn’t tackle head-high hits 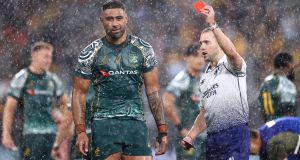 I have to start where I finished off last week – dangerous play. The weekend saw examples of players hitting into opponents’ heads and necks with shoulders or forearms. A short time ago these would have been red-card offences, so it appears that the decision-making recipe has been changed, skewed.

In the Tri Nations match, two yellow cards were issued by Angus Gardner and finally a red, for dangerous hits. All three would have been red – until recently.

We then had to listen to commentators disagreeing vehemently with Gardner, and telling viewers that these yellows were not cards of any colour. Children, too, will have heard these pearls of presumed-wisdom, and may now feel free to play accordingly.

Prior to the match, a beautiful rendition of Advance Australia Fair was delivered by schoolgirl Olivia Fox in both Eora and in English. Sublime.

In Wales v Italy, TMO Pascale Gauzere advised Wayne Barnes of a high tackle, there wasn’t much in it, but it’s absolutely essential that we must protect players’ heads. Correct call.

In contrast, (14th minute) Gauzere advised no action was necessary when Liam Williams charged into a breakdown, with a forearm strike to the head of an opponent. The TMO called it a legal clearout – a statement which holds no water – and did not show it to the referee for review, whereas there was a red-card decision to be discussed.

Astonishingly, not one of the on-pitch officials thought differently from the TMO.

If players’ heads are not sacrosanct, the game is travelling along a very dangerous track.

World Rugby has a duty of care, so has the IRFU. What is their position, and, very importantly, what view does David Nucifora give to WR, and does it tally with that of the IRFU?

Apart from the horrible long-term effects of concussion, there is likely to be an enormous financial problem coming down that very same track.

In fact, reports are now breaking that a growing list of players, including former All Blacks, is gearing up for a legal battle due to cognitive issues, claiming these to be the after-effects of rugby injuries. If proven it’ll be mightily expensive.

Don’t forget that the NFL has, to date, agreed settlement packages totalling $1 billion for brain-related conditions.

A sigh of relief echoed out from the Ireland coaches’ box. Early on, it had looked like much of the “same old” stuff, but Ireland perked up after a Scotland sin-binning, with Keith Earls touching down for a lucky enough try. They moved up through the gears pretty well from there.

But what of the opposition? Scotland were poor, without Finn Russell, they are a Stuart Hogg one-trick pony; and that pony was distinctly off-colour.

As Ireland gained the ascendancy, Scotland showed “expertise” at momentarily slowing down what should have been fast breakdown ball. Referee Matt Carley had a good match, but I’m sure he’ll look at his approach here. He became somewhat over-preventative in his communication – once the offence has happened, asking players to “let it go” is too late.

Scotland were guilty of several low “no-arms tackles” – the tackler, leading with his shoulder, going low into the shin or knee of the ball carrier, and these have the potential to cause serious injury. Not picking on this referee, who did spot two of them, these so-called tackles need to attract more attention. One, not picked up, by Jonny Gray came within a whisker of stopping the momentum prior to Cian Healy’s try.

A couple of things Ireland could usefully look at – captain Sexton’s complaints to the referee on clearly correct decision are valueless, and irritating to the men with the whistle. Maybe better to build rapport.

The referee indulged Ireland, allowing them lineout delays while they held a fireside chat about tactics. Don’t expect the same latitude when the Six Nations comes around.

Wales struggled for the first hour before running in tries at will, so the men in red are far from being a threat in the Six Nations. Wayne Barnes, thankfully, was again not so vocal. “Less is more” works best, and hopefully this approach is permanent.

Italy scored probably the try of the competition, working the ball down the left hand side before sweeping right across the pitch to Johan Meyer who thundered down the touchline, skittling the last Welsh defender before diving over.

Wales created magic of their own, Justin Tipuric producing a mesmeric dummy-pass, before Kieran Hardy crossed for a splendid try.

For Georgia v Fiji, Scotland had Mike Adamson in charge. A tidy enough performance, but based on this Tier 2 contest it’s very hard to rate him. What a pity Covid ensured that this was Fiji’s only match. Exhilaratingly, they touched down six times.

France deserve serious answers on several key decisions and non-decisions, in both normal and extra-time, by Irish referee Andrew Brace. Fabien Galthie is livid (“it’s difficult to lose because of decisions”) and he has a point – the last penalty in normal time, for example, was incorrect, with a prior English knock-on also involved. The knock-on, to clarify things, was outside the remit of TMO Ben Whitehouse. So, it’s unfair and incorrect to blame him.

That penalty positioned England for their equalising try; it was a game changer. Referee Brace needed to do so much better.

Galthie again, “the match turned not on play, but on decisions”. That was a shame.