Having ended first year in charge on a high, coach is optimistic about next year’s Six Nations 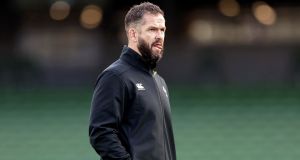 Ireland more or less finish the year where they started, or where it might realistically be felt they should finish it. Third in the Six Nations and third in the Autumn Nations Cup, the best of the rest if not yet dining at the top table.

Andy Farrell couldn’t quibble with this.

“That’s the facts, I can’t argue with the facts,” admitted the coach after Saturday’s convincing 31-16 win over Scotland. “I suppose, everyone is talking about England and France putting in some really good rugby but if England or France beat Wales by 30 points or put 31 points on Scotland everyone would be raving about their improvements as a team.

“Scotland are an extremely good side that’s improving massively over the last couple of years,” he added, perhaps a tad generously. “I think they play a great brand of rugby, physically they’ve improved massively so to score 31 points against them at home today is very pleasing.”

Nonetheless, the nature of a more commanding win over Scotland than the unconvincing win which started 2020 was a good way of bookending the year. It can fuel real belief within the squad that they are generating something positive and can be genuine contenders in the 2021 Six Nations with the probability of Tadhg Furlong, Dan Leavy and Garry Ringrose fit and healthy.

“I 100 per cent think that we believe anyway,” said Farrell. “Lads are gonna fall by the wayside over the tough schedule over the Christmas period etc, so I don’t think you’re ever going to have a full squad but any side would welcome the quality of Tadhg and Ringer etc, and there’s all sorts of other lads who are going to come back into the frame, fitness wise.

“But the learnings for the lads who have been in here, I mean how priceless has this period been for the likes of Andrew Porter? I thought he was outstanding today and I think the period of time which he has had to sit there as the number one tighthead has been absolutely priceless for him and for many others in a similar position to Andrew Porter.

“So I think it’s been a great period to grow the group in maturity regarding international experience, and there was always an eye on preparation for what’s going to be around the corner after Christmas regarding the Six Nations.”

As well as the further development of Porter and the emergence of Caelan Doris and Hugo Keenan, an eye-catching cameo by Eric O’Sullivan, the 11th debutant of the year, there’s also been a revival by the thirtysomethings.

Johnny Sexton, Keith Earls, now Ireland’s second highest try scorer of all-time, and Cian Healy provided all the points until Ross Byrne’s late two penalties, while Peter O’Mahony and Conor Murray have responded superbly to being on the bench for two games apiece. Did that provoke a response?

“I don’t know. I suppose you’d have to ask them that,” said Farrell. “From my point of view, the only thing I would say is the type of men that they are, they’re team men – 100 per cent through and through.

“Their attitude that’s shown through not playing a few games is what has made us stronger as a group so they’ve added to the whole group and the feeling of the group through their demeanour as top-class internationals.”

Between now and the opening match in Cardiff against Wales a mere nine weeks away, there is the small matter of an entire, four-game pool campaign in Europe for the provinces – akin to a glorified knock-out tournament – sandwiching three rounds of provincial derbies.

That’s some juggling act for the provincial think tanks, and the message for the players before their well-earned dinner and a few beers on Saturday night?

“We already spoke about that,” said Farrell. “It’s obvious that competition for places is going to be huge over the next period of time because they’ve got to play against each other, they’ve European games, etc.

“But, at the same time, there will be a lot of reflection on what’s happened over the last eight weeks and on what we’ve started and what we need to do to make sure we don’t come back in for the Six Nations against Wales having to start again. There’ll be some reflection pieces along the way.”

And they’ll be that bit more positive now.