Ulster without Henderson and Burns for Toulouse 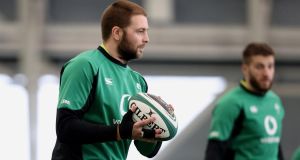 Ulster will be without Irish internationals Iain Henderson and Billy Burns for Friday night’s Heineken Champions Cup game against Toulouse at the Kingspan stadium (8pm).

Ulster captain Henderson picked up a knee injury during Ireland’s Autumn Nations Cup win over Scotland and was replaced before the interval.

He underwent a scan and has now been sent to see a specialist to ascertain the next course of action but it is not a short-term issue, as Ulster head coach Dan McFarland admitted without being specific about how long Henderson could be absent. “It’s a big loss, Iain is a talismanic figure for us; he’s our club captain.

“He’s a big game player and he’s played really big games for us in the recent past and throughout his career. Having said that, Al (O’Connor) and Sam Carter have been doing a tremendous job in the engine room and they’ll continue with that.”

McFarland was asked if he was able to offer a timeframe on Henderson’s rehabilitation to which he replied: “Not yet. We’ll hang onto that info until we have a specific timeframe but it’s not going to be a quick turnaround, I can tell you that.

“To lose your captain and you lose your ten as well, that’s a difficult one but again we’ve played a number of games over the past while and played pretty well, albeit not at the same level we’re about to face. The guys that have played while Billy has been with Ireland have done a great job and we’ll be happy to trust in them.”

Burns picked up a groin problem on Ireland duty against Georgia in Dublin and is also an absentee. Kieran Treadwell is also unavailable for Friday through suspension. Ulster are permitted to have 500 spectators at Friday’s match.