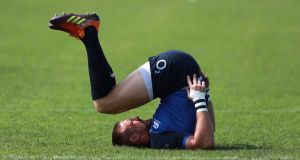 When Mike Brown was omitted from Eddie Jones’s preliminary England Rugby World Cup squad on July 4th, no one could have suggested it was down to a lack of conviction. Being bullish is Brown’s default setting; a competitive, combative personality, the fullback is certainly a divisive character.

“You want to be named in all the squads Eddie announces,” says the 33-year-old, who was added to the training squad two weeks ago. “We are all competitive animals, so we would be lying if we didn’t say we were disappointed if we weren’t named. You have that doubt at the back of your mind, but Eddie said: ‘Just be ready,’ so I went straight back to Quins and was welcomed with a fitness test. That was savage, but then I made sure I was ready. I was over the moon to get the chance to come back in.”

Brown is in Treviso at a training camp. The city was picked in order to best mimic the conditions that await the players in Japan. They have had to endure sweltering levels of humidity in north-eastern Italy – up to 90 per cent – which has been “incredibly tough”.

“As soon as you step outside, everyone starts sweating. You are absolutely dripping with sweat and that makes ball-handling very tough,” says Brown. “It is hard to keep your core temperature low, because you are sweating all the time and it just sits on your skin and then heats up even more. It is sunny here as well so just to try and keep your core temperature down is the hardest thing.

“We have got things in place in training to do that – guys coming on and spraying you with cold water and trying to wipe the sweat off you so your skin gets the chance to cool down. Things like that.”

To show just how draining these conditions have been for the squad, Brown has been losing around 3kg every session. For context, when he plays a Test match at Twickenham under the highest intensity, he loses less than 1kg. But, he stresses, with the right nutrition and recovery, the weight will be back on by the afternoon session, “no problem”. “We have protein shakes, protein bars. We have some fruit. Then getting the liquids with proper salts to get the hydration back in,” he says.

If high-intensity training has been Jones’s stick, then his willingness to allow his players to let their hair down off the field has most certainly been his carrot. Brown seems content, when comparing this pre-World Cup period to that of England’s disastrous 2015 campaign, that off the field “we are getting things right which maybe we didn’t then”.

“At the weekend, we had a boat trip to an island just off Venice and had some food and enjoyed each other’s company and had a few drinks,” Brown says. “We have had positional dinners, team drinks – with staff and players – and just doing little things to build bonds and memories, talking to people you don’t normally get to talk to. You learn a lot about people you don’t spend every day with.”

Jones may ultimately decide against Brown for his 31-man World Cup squad. He has faster, more skilful players to call on and he has players who have been picked more regularly throughout his tenure. If Brown were to find himself on that plane to Japan in September, however, he says he would not let anyone down. “I am a competitive animal and I absolutely love playing for England. It means everything to me.” - Guardian