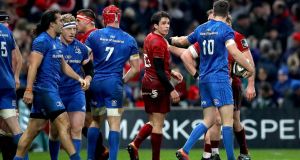 A year is indeed a long time in rugby. Less than 12 months since Ireland brought down the All Blacks and were duly elected World Team of the Year, there was the triple whammy of Ireland’s defeats by England and Wales and Leinster’s by Saracens. Meanwhile, the improving Springboks, as well as the All Blacks, loom ever larger as prospective authors of another World Cup quarter-final exit.

In acknowledging all of this, Shane Horgan is far from a doomster or a gloomster, but he wants to see Ireland’s interplay between forwards and backs evolve, more line speed in defence, especially on the outside, and more kicking in the middle third of the pitch.

Unlike some political bluffers across the water, if nothing else Horgan doesn’t contradict himself with the passing wind, and he still adheres to his long-held belief that Ireland also need “a proper second receiver as well”.

“I don’t think that’s going to happen. But I think we’re a bigger threat, whether it be a traditional second receiver at second five-eighth, as a ‘12’, or that we have a proper outlet down the short side with a fullback as a first receiver there,” said Horgan, who was speaking as an ambassador for Energia.

“I think we’ve become too ‘Johnnycentric’. And if you look at when he goes down, all we’re doing is waiting for him to get back up again, as opposed to exploiting an opportunity that could be there.”

Specifically this means working Joey Carbery into the starting team or, at the least, as an option at 12 or 15 off the bench, given Horgan believes Garry Ringrose is “better on the outside than being that outlet”.

“I don’t think Joey has had enough time. I would have liked to see him play ‘12’ as well. He wants the ball, and he plays it flat – a second receiver flat, when you’re playing that really fast line?” says Horgan, raising his eyes in excitement.

“You’ve also got a kicking option. I’d like to see him play [but] the second choice flyhalf, that seems to be what he’s categorised as. So that mightn’t change, but I’d love to see him play with Johnny.”

Horgan cited the example of Sexton and Owen Farrell working in tandem for the Lions against New Zealand in the second and third Tests.

While Horgan admitted he was “not comparing like with like”, he maintained: “That was something special and we’ve forgotten how good that partnership was and the damage it did, and how slick it was against an All Blacks team that couldn’t handle it.”

“And if they [the Lions] had had that in all three Tests, they would have won the series. I know Joey isn’t Owen Farrell, but I’d like to see him [Joe Schmidt] have a look at it.”

Certainly Leinster were more effective on the edges and had another arrow in their quiver when Carbery last worked consistently in tandem with Sexton three seasons ago, and this is a drum Horgan has been banging for some time.

Carbery is also the only viable option as a second playmaker since Simon Zebo decamped to France. As well as his renowned finishing, Zebo could also step in as first or second receiver with his inventive distribution and wicked short kicking game, and Horgan pines for the influence of the former Munster fullback.

“It would be so nice to see Zeebs, wouldn’t it? And there’s a guy we talk about playing with a smile on your face and having an energy you just know would make a difference.”

“He’s just got an energy you can’t help but like. Every time I see the guy he makes you smile. A squad is more than the make-up of the individuals as well, and needs the glue to bind you, and I think he’s one of those guys.”

“And he’s not just that. He’s a savage player. He’s really, really good and he’s playing really well. I think it’s a shame he’s not in the camp certainly.”

In any event, Horgan’s bottom line in this is: “If you have two first receivers who play flat to the line and move the ball wide, it’s a different type of rugby. I think if you’re going to do something special, you can’t do what everyone else is doing. I think you’ve got to do something extraordinary and really carve out what Irish rugby is, and I think we could do something like that, but I don’t think we will.”

Horgan believes Ireland remain damaged by the manner of the defeats to England and Wales in the Six Nations, which in turn was compounded by the Champions Cup final, although “there is now a whole body of work that can be analysed, so they will be formulating a new gameplan towards that”.

“But, I still think fundamentally we don’t kick enough in the middle third,” he maintained. “Against weaker teams we can sometimes go through phases and get ourselves into a position to break them down. But I think against better teams when we don’t kick, we’re making a rod for our own backs. It wears us out more than it wears out them.”

The body of work achieved by this current squad is in stark contrast to those Horgan was involved in, but the Springboks’ “renaissance”, coupled with Ireland’s reversal in fortunes have lowered his expectations.

“That’s just me. It’s different when you’re in the team or the management. But all of a sudden you think ‘phew, this is tricky’. Even Scotland is tricky. It’s going to be hard. Success for us is getting to a semi-final, but success is going to be hard won here.

“Not to say it can’t be done. I’m optimistic about how good we can be when we play our best rugby and also about how Ireland can operate against South Africa at their best, but it’s tricky.”

1 James Ryan injury could open the door for Ryan Baird
2 Shane Lowry finds some welcome form as US PGA looms
3 All in the Game: Klopp gets the last laugh in quiz show
4 Ken Early: Frank Lampard’s problems start at number one
5 Heavy on the Mayo
Real news has value SUBSCRIBE