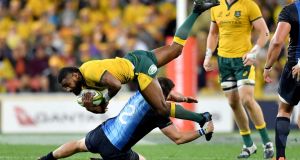 Australia must build on the confidence gained from their scrappy 16-10 win over Argentina on Saturday if they are to make an impact at the Rugby World Cup, former captain John Eales has said.

The Wallabies clinched the much-needed victory in Brisbane to secure a fourth victory in their last 14 Tests but with back-to-back fixtures against world champions New Zealand coming up, Michael Cheika’s side need to improve quickly.

Eales, a two-time world champion with Australia in 1991 and 1999, believes the current squad need to trust in their abilities if they are to be successful when the World Cup begins in Japan on September 20th.

“I think there is talent there but I think what they need to work on is a true belief in themselves,” Eales said in Tokyo on Monday. “I think they think they can win the big games but it is about getting that consistency in performance that they start to win the big games more often than not. There is potential there.”

On Saturday, Argentina’s Facundo Isa scored a try with six minutes remaining to set up a tense finish but the Australian defence held firm and this tenacity is what impressed Eales the most. “I think one of the most important things we saw in that game was the ability for the team to produce across 80 minutes,” said the 49-year-old, who led Australia to World Cup glory as captain in 1999.

“Yes, there were some mistakes and they could have scored more tries but when the game was in the crux moments at the end, they actually took some control of that game. The team didn’t panic, they maintained their calm and stayed composed.”

Australia have reached at least the semi-finals at every edition of the World Cup, bar two, including the final last time out in 2015. Eales believes this is why the Wallabies shouldn’t be ruled out, despite their poor form, and backs Cheika’s team to build momentum during the tournament.

“The way you perform and go through a tournament is quite different because really the only thing that matters is the next game,” said Eales, who earned 86 Test caps from 1991-2001.

“Whatever you did that week, if it got you through then it doesn’t matter. It is just about keeping on progressing and you will have those moments of luck, chance or magic.”

Australia begin their bid for a third World Cup trophy against Fiji in Sapporo on September 21st. Despite a surprise loss to hosts Japan on Saturday, Eales has been impressed with Fiji’s improvement in recent years and believes all the Pacific Island nations have moved closer to the Tier One sides.

“Fiji is going to be a super hard game and . . . one of the reasons why Fiji and some of the island teams are so much better at a World Cup is because their best players are playing together and training together for a consistent period of time,” he explained. “In the past you could have been sure that your scrum would be better, your line-out would be more efficient, you know they are a hell of a hard team to defend but they tended to be more individuals doing great things.

“Now, what we are seeing with Fiji, is they are playing great team structures with the individual flair on top of that. “They will be a really big challenge.” Alongside Australia and Fiji in Pool D are Wales, Georgia and Uruguay.