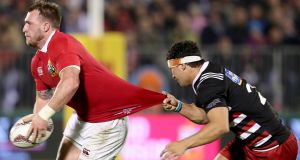 Stuart Hogg is tackled by Jonah Lowe of the Barbarians. Photograph: Dan Sheridan/Inpho

It wasn’t a defeat. That would have constituted one of the most ignominious days in Lions’ history. But a one score win over a composition provincial side who were 16/1 and 31-point underdogs would not have felt like much of a win within the Lions camp.

Although they looked the fitter, bigger, stronger and better collection of athletes and professional rugby players, the Lions still contrived to make awfully hard work of putting away a gamey side somewhat short on stardust.

Far from playing with their desired tempo, the Lions were often pedantic in possession. The apparent lack of energy as much as cohesion was a concern. Most of all, one suspects, their breakdown work will have to improve, be it better presentation of the ball and more accurate clearing out, given how fiercely the New Zealand regional sides compete there.

Individually, there were few truly stand-out performers. Alun Wyn Jones was their most resolute forward, Toby Faletua showed up pretty well on the ball, and in defence (14 tackles) as well, Kyle Sinkler provided some lovely touches in open play and Ben Te’o was the pick of the backs with a strong carrying display. He had 13 carries for 87 metres and five line breaks. Ross Moriarty carried well too. But Sam Warburton, like many, appeared in need of the hit out.

Rory Best lost his first lineout, but won a couple of turnovers as well as making a few carries, passes and tackles (11 in all), but it was an undistinguished night for Iain Henderson and Johnny Sexton. The same was true for Stuart Hogg, Greig Laidlaw and Jonathan Joseph, with the latter two amongst the more culpable for what was at times a sloppy defensive display too, Joseph missing three tackles and Joseph two.

The Lions were making their ninth visit to Whangarei, and their first in the redeveloped and renamed Toll Stadium since 1991, having beaten Northland on all previous eight treks to the New Zealand’s northernmost city. Their return prompted a capacity crowd of 19,900.

Despite the temporary seating, most were congregated on the grassy banks which encircled two-thirds of the ground. Bearing that particularly in mind, thankfully the steady downpour for almost two full days leading up to the game had abated by early afternoon. And the pitch, like so many in this country, seemed pristine and almost completely drained by the time the 10-match tour, after all the bloated hype, finally kicked off, NZ Sky Sports having billed it “Rugby’s Greatest Series”.

The honour of the first kick-off fell, ironically, to Warren Gatland’s son Bryn, and unfortunately for the Lions, Henderson missed it, thus obliging them to defend inside their 22 for much of the first seven minutes. Twice the Barbarians kicked penalties to the corner, the second after Alun Wyn Jones was offside at the fringe before making a strong tackle.

The Lions repelled both drives, Joe Marler almost singled-handedly smuggling the ball and forcing a turnover scrum. Sexton found a good touch from a penalty, but then missed his first attempt off the ‘tee’ in a Lions’ jersey when pushing the penalty from the right to the right - as he occasionally does.

Te’o was beginning to make inroads though, albeit after one break he was subsequently dumped by Inga Finau before Best fumbled at the breakdown. At least Sexton, despite the call for the ‘tee’ being booed again, landed his second attempt to open the scoring.

However, when the alert Luteru Laulala latched onto a loose ball amid a thicket of bodies, he sprinted clear. His counterpart, Stuart Hogg, did enough to complete the tackle, and when Laulala offloaded to the supporting Finau, Faletau made a superb try-saving tackle from behind and prevented Finau from touching the ball down.

Even so, from Sexton’s poor touchfinder, the Barbarians reclaimed Gatland’s up-and-under, and eventually, playing with an advantage for Henderson going offside, the captain Sam Anderson-Heather went through tackles by Henderson and Laidlaw for a try which Gatland converted.

Things didn’t get better, for when the Lions put together their most controlled spell of running and recycling, Sexton pulled the ball back for Joseph to find Hogg on the outside, but his poor pass forced Watson to stoop and stumble in gathering, and he was forced into touch, when a waist-high pass would have given him a fairly routine finish.

Moriarty then had the ball ripped from him by Josh Goodhue, and when Te’o took Sexton’s long pass and beat his man, he released Hogg. But he was tackled just short with Tommy Seymour unmarked on his outside. Laidlaw, taking too much out of the ball, was held up when running on his own off a solid five-metre scrum rather than pass to Te’o, Faletau was held up short after good hands by Henderson and, not for the first time, Kyle Sinkler, and the half ended with Joseph also held up over the line.

All in all, it was not a great first-half for Sexton. There was a missed penalty, a slightly sliced defensive touchfinder, an over-cooked cross-kick and a loose pass. And three minutes into the second half Greig Laidlaw took over the kicking duties, perhaps partly because Sexton had received a dunt after the pass, to make it 7-6. Soon after, Sexton was replaced by Owen Farrell.

Finally the Lions clicked. Moriarty made a strong carry off Farrell’s flat, cut-out pass, the outhalf then linking with Watson for the winger to step two men close to the line and finish in the corner. His celebration looked misplaced. Farrell lined up the touchline conversion, and nailed it for a 13-7 lead.

Even then, Gatland put the Barbarians back on the front foot with another long, raking touchfinder in what was almost his last of many impressive acts. And it needed Stuart Hogg and Tommy Seymour to combine in keeping Vaka and Joe Webber out.

It said everything about the performance and the night that with 15 minutes remaining, Warburton had to opt for a shot at goal just to push the Lions two scores clear, only for Farrell’s penalty to hit the upright.

Justin Tipuric promptly replacing Warburton, and reclaimed a steepling Farrell up-and-under before passing inside to the supporting Rhys Webb who, alas, lost the ball forward in being tackled just before the line.

With less than two minutes remaining, the Baabaas went up the line and the crowd’s noise levels ratcheted up as they sensed a shock. But one of the few things which the Lions did well was defend mauls, and then did so again, as Mako Vunipola came through to rip the ball.

A less than spectacular end to a less than glorious night.