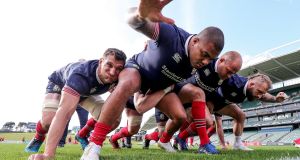 About the nearest squad member to come under the tag of a bolter is the 24-year-old Harlequins tighthead Kyle Sinckler. He makes his first start for the Lions on Saturday, having won all of his eight caps to date for England off the bench. Yet in so many ways he embodies much of what the Lions are about.

A pleasantly bright-eyed, wide-eyed, easy-going and engaging lad, as a self-proclaimed Lions’ fan Sinckler has been reciting famous Lions speeches to teammates, such as those by Jim Telfer and Paul O’Connell, while plaguing roommate Rory Best and others to share many of their experiences.

Sinckler has already admitted to lying on his mum’s kitchen in tears after the Lions lost the second Test in South Africa in 2009, and asked about Telfer’s famous speech before the deciding third Test win of 1997, immediately quoted its most famous line “This is our Everest!”

“I think I’ve watched that about 100 times. I remember watching that as a kid all the time, him sitting down talking to Martin Johnson, Lawrence Dallaglio, Tom Smith, Paul Wallace. Yeah, they do ask me to do renditions of the Jim Telfers, the Paul O’Connells. I’ve watched it all.

“I’ve always been a fan and always will be, so it’s just a massive honour for me to put on the jersey at the weekend and hopefully I leave it in a better place.”

“I’m in a bit of rugby heaven at the moment. I’ve got Rory Best next to me who has 104 caps. I’ve got AWJ who, I think, has 102, Joe Marler, regarded as one of the best looseheads in the world, Sam Warburton, Faletau. I’m just trying to learn off these guys and see what works and what doesn’t. I am just taking it all in and try and learn because these guys have 100-odd, 70-odd caps for a reason and that’s where I want to be, so there’s no greater place for me to be at the moment than learning off these world-class players.”

He likes himself to a sponge, in his constant desire for knowledge. “I’m pretty sure Rory Best is tired of hearing my voice. He shared a room with me for about two or three days and I’m always asking him: ‘what was Marcus Horan like?’, ‘what was John Hayes like?’ ‘Jerry Flannery, what was he like?’ ‘Eddie O’Sullivan, what was he like?’ I just want to learn, what was Paul O’Connell like, etc.”

“He’s just there looking at me like, ‘really?, it’s 12pm and we’ve got to get up in a few hours and you’re asking me about the 2007 Six Nations?’ I’m always trying to learn, I’d be a bit of a fool if I didn’t ask these guys questions, watch them and hang around them, to see how they work day in, day out. At the end of the day, this is a once in a life-time opportunity, isn’t it?”

“For me to be here, to be with all of these great players . . . they’re not just good players, they’re world class and probably one of the greatest players ever, if I can’t try and be a sponge and learn off them, then I’d be a bit naive and a bit stupid.”

How will all this Lions’ worshipping and giddiness manifest itself?

“Hopefully in a good way, through excitement, trying to get the ball in my hand and do some good carries, be solid in defence, good scrum and just doing my job. It will be good to come and play out here as well. I played about 15 minutes in a mid-week game against the Crusaders (for England in 2014) so it will be good to get a good run-out this time and just try to learn – because when you watch Super Rugby, it looks quite quick! We’ll see how quick it is first-hand.”

In any event, you believe him when he says he says motivation for games comes easily.

Though relatively unproven, Warren Gatland has gambled on the incredible power of the 6’ 0”, 19st 3lbs Sinckler, while admitting the player is still “pretty green as a rugby player but he’s got something that the others haven’t got. He’s explosive as a ball-carrier. He runs different angles. He’s a bit like an overweight back who ended up in the frontrow, because he loves the ball in his hands and he likes to think about the angles he can run to get in behind the opposition, using that power that he has and being so explosive off the mark. We need to use that. We need to exploit that.”

“It’s a good chance for him to start on Saturday. We know that England use him off the bench, he does have an impact coming off the bench. He’s fitted in extremely well. We are happy with the way he’s handled the step-up from club and international rugby to the expectations that are put on him.”

“There are a few things he’s got to work on in his game and not get too over-excited, make sure of his discipline. It’s paramount he controls that. But his work off the field has been diligent, he knows his roles at lineout, he’s scrummaged well in practice, I’m looking forward to seeing how he goes on Saturday. It’ll be a good test for him.”