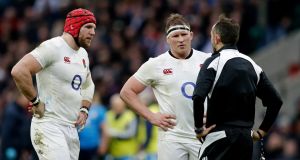 In the late 1990s outhalf Brian Glennon received the ball from his scrumhalf David O’Mahony when we were playing for Lansdowne at Buccaneers RFC.

That the locals spent the morning watering an already waterlogged Ballinasloe pitch is immaterial. So too the gramophone pointing into our dressing room playing what must have been the original recording of the Fields of Athenry.

Glennon received the ball off a Lansdowne scrum near the Buccaneers’ try line. As the flat aggressive defensive line approached he lifted his hands head butting the ball forward. I won’t tell you the local crowd’s reaction, similar to Twickenham’s last Sunday, but the Buccaneers players all stopped and protested ‘knock on’.

Glennon slipped past the defence, gathered the ball and scored a try.

The fact we did exactly the same against Boland RFC in Cape Town to the outrage of the entire Boland team with Lansdowne’s Irish centre Kurt McQuilkin scoring is material.

Neither Buccaneers nor Boland had seen this before. Now, is that our fault? No – and we’d varying successes and each time the opposition protested.

All Black No 8 legend Zinzan Brooke would often break from his defensive scrum and stand in the narrow side long before the opposition fed the ball. Why would he do this? To close down opposition attacking options but mostly because he could; the then laws allowed it in the very same as with Glennon.

Then John Eales known as ‘Nobody’, because ‘Nobody is perfect’, would stand under his posts as the opposition kicker launched a long range penalty. He knew that with length the ball may fall short or barely slip over the bar so he would have his two props lift him high into the air and many times both he and other beanpoles would prevent the ball converting. Why? Because the then laws allowed it.

Once upon a time I entered from the ‘wrong’ side of an evolving tackle when playing against Young Munster. Having slipped around before the superb Ger Earls arrived and knowing his name I asked centre Francis Brosnihan for the ball; he not noticing the politeness duly obliged and off I went (legally) because the laws allowed me to do so; until Ray Ryan smashed me (illegally). That breakdown law has changed, what Ryan did is still illegal!

The reason for success at the breakdown and all the other examples above was simple; the opposition in all cases didn’t know the laws of the game as deeply and were exposed; the OODA Loop if you will.

But the breakdown has always been a place of the unknown. What has always vexed me about rugby people is how deeply vocal they became with Richie McCaw and his antics over 148 internationals.

Thousands of people would roar at the ref; yet these very thousands to this day have no clue of the breakdown laws which is why Conor O’Shea is being hailed as a genius and rightly so. But all he did was apply the breakdown law that this very article and others have discussed time and again even with homework given out to the reader most recently post the Australian visit to Dublin.

In order for all the above initiatives to be successful the referee must be supremely vigilant as even referees can miss O’Shea’s tactics.

When playing England the key is always to slow down their flow of recycled ball; hence engaging over the ball to firstly steal, then slow and then disrupt the scrumhalf link to his first receiver

Take the lineout. We are well versed in; off the top, down and give, peel or maul options and to meet the same the defending lineout must have a strategy; Ireland’s malfunctioned for Alex Dunbar’s Scotland try for instance. But there’s another option and that is less obvious but there are tell-tale signs none the less.

Watch when a defending lineout ‘volunteers’ to set up wider than the mandatory one metre; say two metres. They have something devious on their mind and the laws as they stand are why they need to cheat into the extra metre space. It can be easily missed and hence the next action looks blatantly illegal; not so.

Should the attacking lineout intend to maul as Ireland utilised to such an extent against France then France should have elected for the above cheat but didn’t. Do they know the law? What the extra metre gives to the ‘cheating’ team is a fake engagement where no maul occurs. Stepping away from engagement is illegal hence the extra metre. The tail gunner is open to be tackled and with his head down is totally unaware that no maul exists.

Now, what can be done? Like O’Shea, understand the laws. Then you can turn his Italian strength into a weakness that’ll ultimately punish them severely.

When playing England the key is always to slow down their flow of recycled ball; hence engaging over the ball to firstly steal, then slow and then disrupt the scrumhalf link to his first receiver. All of this gives the defending backline time to get into defensive position. These are crucial seconds where O’Shea turned this on its head when gifting the breakdown recycle.

In doing so the Italians became extremely vulnerable in midfield in not slowing the recycle in favour of the ‘fox’. A simple strategy by England; avoid rucks (obviously); go up the guts of the tackle area but even simpler; pull back the ball to the neutral position and a double pass either way would have killed the Italians in midfield who had no time to readjust.