Liam Toland: Ireland looked like a team with a winning mindset

Gerry Thornley and Liam Toland reflect on a bruising encounter at the Aviva Stadium as Ireland comeback from 0-6 to win 19-9 against France. Video: David Dunne 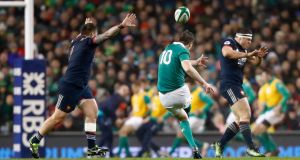 Jonathan Sexton kicks a drop goal against France: Wasn’t it great to see him walk off the pitch unhindered by injury? Photograph: Colm O’Neill/Inpho

Mindset, or more accurately a growth mindset, is where individuals and teams are constantly developing their abilities, where brains and talent are just the starting point. On Saturday Ireland looked like a team that understands the mindset needed to win. France didn’t. The first three lineouts Ireland hit their target and came off the top to afford attacking phases of clever interplays that had been rehearsed in an effort to unlock the French defence. But soon Ireland were down 6-0. The next four lineouts were caught and mauled. Soon Ireland were up by a point, 7-6. Once ahead, the very next lineout Ireland called was off the top.

There are many reasons to be happy with Ireland’s win against France. The margin, their physique and the fact that we bit the French, and any win against them should be welcomed, especially as they have pushed the big teams so close over recent months. France forced Ireland into dark places where the lineout maul was a battleground, at best inching forward and at times crabbing sideways, but it was such a useful tool for Conor Murray to dictate the pace and field position through his ever-increasing box-kicks. It proved in many ways the difference, and clearly the brains trust had the mindset to notice the scoreboard was 0-6 and to adjust accordingly.

That said, while Ireland deserve huge credit, there is one question – one try? With 64 per cent possession and 68.5 per cent time in the French half, is that a sufficient return? A win is a win, I know. But.

On Friday, I wondered what France were transitioning towards. I’m still not sure. For instance, their 1-3-3-1 pod system appears to make sense with the idea of getting the wonderfully talented number eight (and slim) Louis Picamoles into the wide channels to challenge our defence and get his outrageous offloads away. Bizarrely, the ball almost never arrived to him. He had a wonderful first touch and offload but in the second half I noticed only two occasions where, staying true to the pod system, the ball eventually arrived. The first he spilled in contact and the second added value, which is a really poor use of such a wonderful resource.

I had reflected on some of the great rugby players that played in the French number seven jersey down the years but I struggled to see how Kevin Gourdon was in any way contributing to the French cause. With Picamoles out on the wing, Gourdon ineffectual and Bernard Le Roux’s struggling discipline, the French backrow conceded five penalties between them – an entire sub-unit offered poor value. 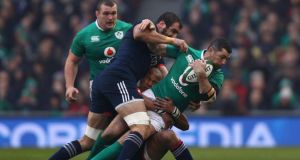 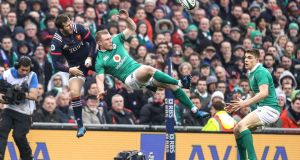 Meanwhile, the Irish backrow worked as hard as in Rome but with less space available to them against the French – at times they were superb. Jamie Heaslip and Sean O’Brien’s double hit on Picamoles off the French attacking scrum on our own line was phenomenal. Equally so was Heaslip’s clearing of the French corridor to open up space for Murray to score – very clever, very subtle but very effective and smart play from Heaslip.

I was really impressed by the French lineout defensive maul. They made Ireland work in a way that even New Zealand couldn’t. They employed a few methodologies in halting the various approaches where at times the first three French forwards to engage the evolving Irish maul were ferocious. England will have taken note, and Ireland will have to evolve their system if they want to go forward on Paddy’s weekend.

Although his lineout wasn’t pretty when he came on, substitute hooker Christopher Tolofua was simply astonishing in his tackle technique and breakdown, but especially how he marshalled the tail of the lineout defence. This is such a difficult role – traditionally the preserve of the openside, but in recent times the hooker is located there. Tolofua was devastating off the tail.

I don’t know whether it was a conscious decision by the halfbacks in acknowledging the lack of top-end match practice from Johnny Sexton, but Murray took so much of that mindset pressure from his outhalf that really allowed Sexton to flourish in a huge array of skills and executions. Wasn’t it great to see him walk off the pitch unhindered by injury as his fast-improving competition Paddy Jackson arrived? But wasn’t it even sweeter to see Sexton fire three old-school Garryowens high into the dirty sky for the French fullback Scott Spedding to spill twice?

Ireland’s first important turnover of nine happened on in the 15th minute when O’Brien hit the deck and the ball spilled. What France did next was interesting as a counterattack – they kicked long, forcing Simon Zebo into conceding a five-metre scrum from which O’Brien made that brilliant tackle on Picamoles. France did look dangerous off our turnovers, especially from deep but couldn’t balance the conditions, discipline and their mindset to win.

Good win, Ireland; and I hope France get there, wherever there is. But I fear those three little words “attention to detail” is where the margins of success and failure lie, and as they can learn from us in this regard, so too can we learn from them. But so too will England. Wales’s loss to Scotland deserves analysis but it’s England who are a better version than France. How many of Saturday’s French side would be selected by Joe Schmidt? Not many.

1 Barcelona in crisis as six board members resign in protest
2 Ireland boss Stephen Kenny: ‘I’ll do things my own way. Put it that way’
3 My favourite sporting moment: When Ireland rocked Kingston and rolled Pakistan
4 Andrew Conway diary: Nailing the wheelie bin challenge on the double
5 UFC 249 cancelled after Disney and ESPN intervention
Real news has value SUBSCRIBE