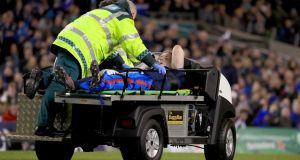 Leinster’s Dan Leavy is taken off the pitch after injuring his knee during the Champions Cup win over Ulster. Photograph: Donall Farmer/PA

Ireland and Leinster flanker Dan Leavy will miss the rest of the rugby season and this year’s Rugby World Cup in Japan following a serious knee injury sustained against Ulster on Saturday in Aviva Stadium.

Leavy came on as a second half replacement in the European Champions Cup match but was stretchered off the pitch just 10 minutes later, with what Leinster described on Monday as “a complex knee injury.”

The 24-year-old has been ruled out for the remainder of the season and into next season to include the Rugby World Cup, Leinster said in a statement on Monday. A devastating blow for Leinster and Irish coach Joe Schmidt, the flanker had just returned from an injury lay off following a calf problem.

“He worked so hard to get himself back and physically fit. He’s such a huge threat on either side of the ball, gives the team a lot confidence so yeah it’s a big loss for Leinster and Irish rugby,” said Leinster scrum coach John Fogarty. “He’ll make a plan now to get himself back.”

Centre and fullback Robbie Henshaw will step up his recovery from a dead leg and will be further assessed by the Leinster medical team this week, while two other players - Jamison Gibson-Park and Rhys Ruddock - suffered head injuries and will follow return to play protocols under medical supervision.

Ruddock underwent a HIA after the game after reporting neck and head issues while scrumhalf Gibson-Park was removed from the game against Ulster in the second half.

Johnny Sexton, who felt tightness in a quad muscle at training last Thursday and was withdrawn from the match against Ulster as a precaution is another player to be assessed this week.

Will Connors will return to full training this week after recovering from his ACL injury, while Rory O’Loughlin picked up a minor hamstring injury just before halftime in the Ulster game and is unavailable this week.