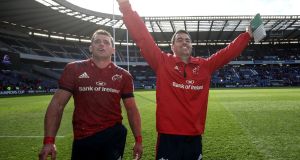 “It’s about passion, integrity, real heart and real grit.” Those are the words of Munster head coach Johann van Graan speaking about what first attracted him to the position he now holds, and of characteristics that were to the fore in the province’s 17-13 Champions Cup victory over Edinburgh at Murrayfield.

It came in the midst of the South African’s eulogy to the Munster fans, who had previously serenaded the team before, during and after the Irish province’s victory, a 16,000 strong cohort that provided the lion’s share of colour and noise in a crowd, numbering 36,000.

Van Graan continued: “If you were inside the bus when we arrived here, it’s breathtaking to see the supporters. It felt like we were going to play at home. In terms of the group, that’s why I came to Munster because of what Munster is about. Munster never seem to do it the easy way and we certainly didn’t.”

He wasn’t oblivious to the imperfections of performance, pointing out that some alterations were made at half-time to the playing patterns, one of which was a more judicious use of possession, helped the team to find a greater fluency.

“It’s something that they will need to appreciably step up again” in their Champions Cup semi-final against Saracens in the Ricoh Arena in Coventry, he said, accepting that the team will need to be “a lot better”.

Rory Scannell offered a player’s perspective, explaining that despite the pressure, they retained a confidence that they could turn things around on the scoreboard and in that eventuality go on to close out the match. “We really back ourselves and the game-plan.

“Once we got ahead we managed the game pretty well. Even when we were under pressure, there was no point where we thought we couldn’t win. There’s real belief in the team, we know we can win those close games. We’ve had a few this year, been there before and it’s great to come out on top.

“We struggled to hold on to the ball at times and the penalty count gave Edinburgh an in and they got some good field position off that but when Earlsy [Keith Earls] went over in the corner [for his second try] I think we definitely managed the game a lot better.

“Once we got ahead I thought we looked pretty comfortable after that. We just knew we needed to hold on to the ball and play in the right areas and not muck around in our own half. I think we did that pretty well in the last 20 [minutes].

“We can definitely hold on to the ball better and play [more] in the right areas of the pitch. Our penalty count was pretty high and a lot of them were at the breakdown. There are definitely things we can get better at and we’ll work on those in the next few weeks.”

Munster are now in a third European semi-final in succession and Rory Scannell believes that the experiences of the last two campaigns will stand to them against a team in Saracens that is similar to the Irish province, he suggests, in terms of their playing orientation. “We probably both kick the ball quite a bit. They have some quality players, a lot of the English boys in there as well.

“Two years ago a lot of our guys hadn’t played in a European semi-final and over the last two seasons a lot of that group that we have now have got that experience.

“We probably let ourselves down over the last two years in the semis and we’ve definitely learned from that. Hopefully now there’s a bit more experience now to push on further this year. We’ll definitely be looking to get that win, hopefully push on to the final and look for some silverware.”