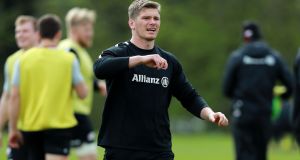 Owen Farrell will bounce back from his Six Nations disappointment, according to the Saracens director of rugby, Mark McCall, who does not believe the England captaincy weighs too heavily on the fly-half.

Farrell was one of only four players involved in England’s Six Nations draw against Scotland who did not go straight back into Premiership action last weekend. McCall rested Farrell and believes the decision will pay off in Saracens’ Champions Cup quarter-final against Glasgow on Saturday.

The England captain was replaced with 10 minutes to go during the Scotland match at Twickenham after a poor performance in which he was fortunate to escape being sent to the sinbin, leading to further question marks over the side’s leadership problems. Speaking after the match, Farrell appeared to shoulder the blame for his team’s second-half capitulation.

However, asked if Farrell finds the responsibility of being England captain a burden, McCall said: “No, I don’t think so. He is learning all the time. He is going to be a great leader for his country. He has played a lot; the captaincy is very demanding at international level as well. So for him to get a week away and come back in, not be a captain but to be one of our crucial leaders, he has been brilliant.”

Farrell’s Saracens team-mate George Kruis was also rested last weekend, while Ben Youngs and Ben Moon were omitted by Leicester and Exeter respectively because of injury. However, the Rugby Football Union’s interim chief executive, Nigel Melville, thought all England players should have been given the weekend off.

He said: “The players really all needed a rest and a lot of them played. That weekend following a bloc of internationals is a really important week to rest. That is something some clubs manage better than others.”