Karaoke on the Champs-Élysées: 20 years on from Brian O’Driscoll’s hat-trick in Paris 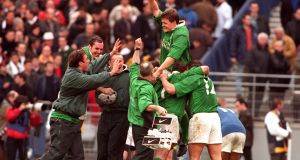 There’s not much to celebrate these days but March 19th 2020 marks the 20th anniversary of one of the most seismic and memorable days in the history of Irish rugby. The brightest Irish star of them all was born.

A skinny Brian O’Driscoll, then 21-years-old and swimming in a baggy Irish jersey that looked two sizes too big for him, scored a hat-trick as Ireland stormed the Stade de France on a sunny Sunday to beat Les Bleus for the first time in 17 years and for the first time in Paris since 1972.

O’Driscoll’s life, and Irish rugby, would never be quite the same again. To further put the win into context, although there had been shoots of a recovery the previous season under Warren Gatland, prior to that there had been three wooden spoons in succession. Not once in the 1990s had Ireland finished above the bottom two.

Even so, Ireland travelled to Paris with some optimism. After a restorative 44-22 win over Scotland when Gatland blooded five new caps (John Hayes, Simon Easterby, Peter Stringer, Ronan O’Gara and Shane Horgan) they had beaten Italy 60-13.

Although France had reached the World Cup final four months previously, they had been hit hard by injuries, with halfbacks Fabien Galthie and Christophe Lamaison among four players ruled out that week.

Playing inside O’Driscoll in the Irish midfield that day was Rob Henderson.

“We’d lost to them by 18-16 in ‘98 in Gatty’s first game, when we should have won, and by 10-9 at home a year before, when Wally (Paul Wallace) came off the bench to give then a late penalty to put them ahead and then Humphs (David Humphreys) missed a penalty to win it. So we’d had two near misses and we had a bit of confidence going in, with a load of young blood in the team.

“Gatty was only 36 remember, and Claw and Gailimh were almost as old as him, but he wasn’t afraid to mix youth with experience and we were actually beginning to get a little bit of depth.”

Yet France started like an express train. David Bory had a try disallowed for a forward pass inside 42 seconds before Gerard Merceron kicked two penalties. “We were sucking seagulls,” remembers Henderson.

But Ireland settled and O’Driscoll made the first inroads off a skip pass by O’Gara before Peter Clohessy charged at the French line. Off another quick recycle, Malcolm O’Kelly’s deft left-to-right skip pass gave O’Driscoll an untouched run-in between the posts.

“Mal’s skip pass off his left hand to O’Driscoll going in under the sticks. Unreal! He was trying to throw a dummy and go himself but let go of the ball,” quips Henderson, chuckling.

Cue O’Driscoll bringing his thumbs and forefingers together in a promised signal to a mate back in Clontarf if he scored that day.

Nonetheless a try by Christophe Laussucq before half-time and two more Merceron penalties made it 19-7. And it could have been game over, in between those kicks, when Emile Ntamack countered off an O’Gara up-and-under for Abdel Benazzi to put hooker Marc del Mason racing clear for the Irish posts from inside half-way.

“Denis Hickie sprinted back and saved a certain try,” says Henderson. “He wasn’t the biggest tackler in the world so he used his head by diving at del Maso’s feet! He knocked it on and Drico dotted it down, which was technically his second of four touchdowns that day.”

A big break by Henderson and a counter by the electric Hickie earned Ireland an attacking scrum nearing the hour. Henderson then took a lovely in-and-out line from Ronan O’Gara’s pass before his delayed offload found O’Driscoll, who had switched inside, for another finish under the posts.

Even so, two more Merceron penalties with Paddy Johns in the bin either side of one by Humphreys, who had replaced O’Gara, left Ireland trailing 25-17 entering the last eight minutes.

A wonderful break by Hickie, supported by Andy Ward and Johns, led to a ruck and Stringer managed to get the ball away despite being hit by Lionel Mallier. Time seemed to freeze for everyone, bar O’Driscoll that is, who scooped up the loose ball and accelerated in one movement before veering around Ntamack.

Obviously it will be remembered for Drico’s three tries, but he was more than that.

The clock was past the 77-minute mark when Girvan Dempsey tackled Thomas Livrement into touch on halfway. Strong carries by Humphreys (given no choice by Stringer’s pass out in front of him), Clohessy and Hayes led to Paul Honiss penalising French replacement prop Franck Belot for needlessly going off his feet.

From 43 metres or so, further than the one he’d missed to win the match a year before, Humphreys connected sweetly. Redemption for the Ulsterman.

“There was a small enclave of Irish fans in the top right hand corner and even though there were 80,000 in the stadium, there must have been 8,000 Irish fans and they outsung the French. Whenever that happened it gave us an extra bit of juice, an extra lift,” says Henderson.

“Obviously it will be remembered for Drico’s three tries, but he was more than that. He was a constant threat and defensively, for someone who was very, very fresh onto the scene, he was just immense.”

About six years before, Henderson, who had played for the Exiles and the Irish Under-20s, had turned down an invitation by Clive Woodward, then his coach at London Irish, to declare for England. Following this Woodward rang the IRFU to tell them to pick Henderson.

“After I won my first cap I called over to his house and gave him my jersey in a Tesco’s carrier bag and I said: ‘No one has helped me more than you have.’ He said: ‘I’ll give it back to you when you grow up.’ He’s still got it though,” notes Henderson.

That win secured a third successive win in the Championship for the first time since 1982. Henderson is now based in London with F3Group, a Risk & Development Management company. Looking back on his career – 29 Irish caps and three Lions tests in Australia in 2001 (‘Waltzing O’Driscoll’ and all that) – Henderson describes March 19th, 2000 as his “favourite day”.

“For me it’s up there with scoring a hat-trick myself in Italy the following year, playing for the Lions and finally winning theHeineken Cup with Munster. There’s some wonderful memories in there.”

“I was 28 that year, it was 28 years since we’d won in France, it my mother’s 50th birthday that week, bringing her to Paris and being part of what is history now, 20 years ago, it not only announced Drico on the scene but I think the re-emergence of Irish rugby on the scene as well.

“It’s very difficult to put the raw emotion of it into words. The game itself was physically and mentally draining. I think I made 24 tackles that day and many players were in the 20s but that just shows the desire and unity of the team, and then you sprinkle on some magic from Drico, and from Denis and Mal, and the supporters who were there. People will always remember 2000 in Paris. And then for a few hours we were lost in France!”

Indeed, that night was memorable too.

“I’d gone down to the Champs-Élysées with Lionel Rossigneux, the FFR press officer,” recalls Henderson. “It was myself, Claw (Clohessy), Trevor Brennan, Gailimh and a few others.”

An unholy alliance if ever there was one.

“We went down to this nice little nightclub, drank ourselves into oblivion and I got back to the hotel at about 1.30 or 1.45. I went through the revolving door and as I’m about to stumble up to my room I see Drico lieing on a chaise longue, and thought to myself: ‘We’ve just beaten France for the first time in 28 years in France, he’s scored a hat-trick and is now a national hero, there’s no way in the world we should be going to bed’.

“So I picked him up, we went back out the still moving revolving door and got a taxi back to the Champs-Élysées. We found a karaoke café and were necking bottles of red wine and eating omelettes and singing songs.

“We stayed there a good while and at 5.30 in the morning, when we were stumbling down the road and Drico was honking like a goose, I decided it would be the right time to ring my mother to celebrate her 50th birthday and introduced her to the legend that is Brian O’Driscoll.”

As a present for his mum, Elizabeth, Henderson had booked the Eurostar to Paris, a hotel and match tickets, but hadn’t spoken to her that day.

“God love her, young Liz from Monageer (in Wexford), after she has spoken with Drico and he handed the phone back to me, she said: ‘Robert dear, I love you very much. But it’s 5.30am. Please don’t ever ring me at this ****ing time again!”