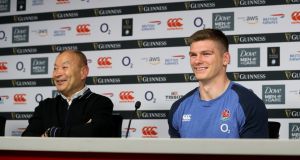 Last weekend we witnessed the best and the worst of rugby.

France, England, Scotland and Wales all scored glorious tries. They were pieces of brilliance. Three of these tries will stand the test of the time and be remembered as true greats.

Sadly, these fantastic plays were not the leading stories last Monday.

The shameful image of Jamie Ritchie’s face being distorted by the powerful clenched fist of the French tighthead, Mohamed Haouas, was blown up large on most publications.

This was followed by photos of another hand. This hand belonged to Joe Marler, whose moronic attempt at humour humiliated the Welsh captain Alun Wyn Jones, who ironically, is one of rugby’s most respected role models.

In the past, a tiny fraction of players, who had oozed out from under some rocks and slithered into our game, would grab another player’s balls and violently yank.

This action was not to affectionately referred to as “The Squirrel Grip”. I am sure the theme of squirrels collecting nuts is not lost on you.

It was, and remains, a dog act, that thankfully it has all but disappeared from our sport.

With an eye on a possible role in the media after playing, Marler was attempting to enhance his reputation as a comedian by touching Jones’s balls.

That Marler felt empowered to act as he did tells you a lot about the culture of unreality in which the players of this English team are living.

They are acting as if they are above the laws of the game and society.

Their captain, Owen Farrell, is a very special player. He is talented and brave. I admire his play. But the disrespectful way that he and many of the English players regularly verbally abuse their opponents has gotten totally out of hand.

Farrell and his English team-mates yelling at George North, then pushing his face was horrid. Examples of this behaviour can be found in multiple matches.

When a diving Manu Tuilagi, tucked his right arm to his chest and glanced North’s head with his braced shoulder, it was a clear and obvious red card.

Unbelievably, in his post-match press conference, England head coach Eddie Jones suggested the referee had made a ridiculous decision.

At that moment I realised that the entire English camp are delusional about the consequences of their behaviour. They are in the bubble of the red rose and can’t see reality.

England’s warped perspective on reality comes from the top. In attempting to defend the indefensible, regarding Tuilagi’s obvious foul play, Eddie Jones accused referee Ben O’Keeffe of bias, saying England were against “16.”

The reality was that referee Ben O’Keeffe was totally correct in both his yellow and red cards against England.

World Rugby’s failure to censure Eddie Jones is symptomatic of the decline in standards we are witnessing across the game from some of this generation’s players and coaches. While no player should be punched, Ritchie ran a good 20 metres to barrel into some French players before getting belted. Ritchie should have been yellow-carded as well.

While England under Eddie Jones have played some sensational rugby over the past year, an unintended consequence of their striving to reach the pinnacle of the international game is that they have lost their collective moral compass.

The facts are that England received a yellow card, a red card and two citing. Their captain continually violently sledged his opposition and their coach incorrectly criticised officials of favouring the opposition. That’s just last week.

Nothing to see here folks. It’s all an anti-English beat up.

In recent months this English team have been significantly below their responsibilities as role models and ambassadors of the game.

Law 9.27 of rugby states: “A player must not do anything that is against the spirit of good sportsmanship”. In the court of observation, there are many current players, with a large rump from the English team, who are flouting this law.

On Thursday, the RFU issued a belated statement that criticised Eddie Jones’s comments regarding referee O’Keeffe. This was way too little, way too late.

World Rugby must introduce significant fines for players and coaches, who speak “against the spirit of good sportsmanship” prior to and after matches.

In businesses, sport and life you get the behaviour you accept. With their judiciary being exceptionally lenient, World Rugby is accepting a lot of destructive behaviour.

World Rugby must stamp its authority on this problem by issuing a directive about verbal abuse. Constantly yelling in an opponent’s face is violence.

Marler received only 10 weeks for touching an opponent’s genitals; Tuilagi received only a four-match suspension for a diving shoulder charge at George North’s head; Haouas’s straight right got only three weeks.

Courtney Lawes, Maro Itoje, Farrell and all the other English players who were verbally abusing and violently pushing Welsh players are free to play.

Eddie Jones got a slap on the wrist for publicly condoning foul play and belittling officials.

Unfortunately, we will see more of England’s ugly behaviour because it is being accepted by World Rugby.

All the beauty and genius of the tries by Anthony Watson, Justin Tipuric and Damian Penaud have been submerged under a flood of foul play and arrogance.

England are playing some great rugby, but their behaviour is bringing shame on themselves and the game.