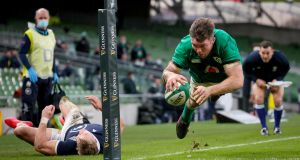 Peter O’Mahony takes off to touch down for a try that was disallowed for a foot in touch during the game against Scotland. Photograph: Gary Carr/Inpho

Plenty of “work in progress” visible inside an empty and freezing Aviva stadium. At least there is a brilliant number eight named Caelan Doris filling a jersey previously borrowed by Willie Duggan and Jamie Heaslip.

Doris stamped his imprint on this Test match and almost every game he has played in 2020.

“Incredible,” said Johnny Sexton of the 22-year-old. “Obviously his first experience against Scotland didn’t go to plan when he got knocked out after two, three minutes but he has just been brilliant. Some of the carries he puts in for a man of his size – like, he is not a massive, massive man – but he just comes out the other side of tackles.

“He has got an offload game, a nice short passing game, off the base of the scrum he is very calm and collective. He makes some really good decisions – when to go, when to pass – but I am not going to say he is the complete player because there is definitely another level in him.

“With the coaches we have here and in Leinster, they will be pushing him to get better.”

Beating Scotland, or avoiding the avalanche of criticism that would follow losing to them, brings Ireland’s “average” first year under Andy Farrell to a satisfactory conclusion. Average is how David Nucifora, Farrell’s boss, described results in 2020.

“Obviously, us as a team, we are not at the top table,” said Sexton, the captain and points gatherer, after his latest combative performance ended with a dead leg that puts his availability for Leinster’s Champions Cup trip to Montpellier next weekend in doubt. “We haven’t been able to beat France and England away from home and that is what the top teams are able to do.

“We are just below that at the moment but I am confident in this team and the coaching staff that we can go to that level, that we can get there, hopefully in February we can get there. We got some tough fixtures [Wales in Wales] to start the Six Nations but today was a good end to the year.

“We need to keep evolving, keep improving,” said Sexton before the usual ‘us against them’ follow-up: “I know you guys aren’t aligned with us but today I thought we showed some really good stuff.”

The ideal situation is the return to fitness of Garry Ringrose, Tadhg Furlong and Dan Leavy or the addition of Ryan Baird and Craig Casey to help take Ireland back to the heights of 2018, but Sexton knows the non-stop punishment of Champion Cup and interpros will remove several more key figures from the frame (James Ryan was concussed out of this 31-16 victory).

“Tadhg Furlong is the full package but Andrew Porter has been outstanding for us,” Sexton continued. “Obviously Tadhg in there competing with thee tightheads makes our squad better. I could throw another few lads I would say are top-class players who have not been around too often but it is a squad effort . . . you might get a few back but a couple might fall by the wayside again. It is an attritional game, it is tough to stay fit all the time.”

Perhaps the Grand Slam and All Blacks victory in 2018 are unrealistic, even unfair expectations?

“No,” Sexton responded. “We judge ourselves by the highest standards. We wish we beat England and France away. We learned some valuable and harsh lessons away from home. We felt the Six Nations trophy was there for the taking. We will live with that forever.

“There is no one who hurts more than us when we don’t perform on the big days. But it is what you take away from it. There are some young guys who played that day that will take a huge amount from it.

“We are happy with the way we are improving. I admit we haven’t showed it in a full 80 minute performance. We didn’t show it over 80 minutes tonight. It is Test match rugby, you can’t turn up and have it all your own way. It is hard, it is different to any type of rugby out there, and I am including Champions Cup rugby in that.”

It can always get worse. Take Scotland and Gregor Townsend; mired in a Groundhog Day where they cannot seem to avoid making the same mistakes.

“Gregor, where are we?” asked a Scottish journalist in the Microsoft Teams post-match briefing. “Where are Scotland?”

“Well,” Townsend responded with his usual calmness, “we are a work in progress. I thought some of the first 35 minutes was some of the best rugby we played all year. That was above expectations given it was a new team today, a new 10, a new 12.”

Concerned by the way the Scottish forwards were bullied in the second half, especially considering England are first up in 2021?

“They weren’t bullied so I am not concerned about that. That did not happen.”

It looked like they were bullied by an Irish pack that has swallowed enough criticism in 2020 to fuel the winter fires.