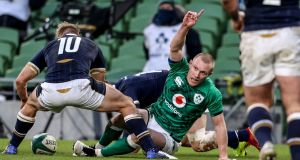 They were right after all. The Irish camp had maintained that with more of a clinical edge there was a performance like this in them and so it proved with what was a statement win to end their nine-Test calendar year.

Compared to the edgy, one-try to nil one-score win over Scotland which began 2020, after a disconcerting period in the first half this was an altogether more commanding, three tries to one victory.

Starting with 11 of the XV from the Grand Slam coronation, Ireland evoked memories of that campaign by twisting the knife with a 19-point haul in a 12-minute spell either side of half-time. It was almost vintage Ireland, and rectified a pattern of poor third quarters in this autumnal campaign.

Also echoing that campaign, Ireland’s huge work rate and accuracy at the breakdown was the foundation stone for this win. The pack, after a couple of set-piece wobbles, were excellent, with Andrew Porter and Caelan Doris again exceptional, and with Conor Murray and Johnny Sexton back in harness, Ireland were well in control for the most part.

Murray went for 80 minutes, and despite having his left thigh strapped early on, critically Sexton lasted beyond the hour, by which time it was done and dusted. He also out-captained a tetchy Stuart Hogg.

The footwork, with Doris, Iain Henderson and Bundee Aki showing the way, was better and there were some nice sweep plays as Ireland played with plenty of width.

They started well but then disconcertingly lost their way a little. Both of their set-pieces malfunctioned briefly, before being rectified, and Scottish carriers began to find soft shoulders and Ireland fell off tackles as Jaco van der Walt had the scoreboard ticking. Whereupon Ireland improved their energy and accuracy in repeatedly using the full width of the pitch to seize an 11-9 lead by the break, after which their line speed and tackle execution improved significantly.

Ireland would normally have earned some reward for a good start, but Sexton’s first 40-metre penalty – after two weeks out – was slightly to the left. It was Ireland’s first miss of the tournament.

Van der Walt then hit the post from 45 minutes, also Scotland’s first miss of the tournament, but soon opened his Test account from 30 metres when the Irish defensive line was offside.

Worryingly, Sexton had to have his left thigh heavily strapped and Ireland’s second scrum, specifically Cian Healy, also conceded a penalty, with which Van der Walt doubled their lead.

Sexton nailed the 45-metre penalty but Van der Walt put the Scots on the front foot by carrying to the line before they outflanked the Irish defence. Henderson was pinged for ripping the ball after the tackle was completed and Van der Walt made it 9-3.

Ireland’s tactic of employing Murray’s box kicks in the middle of the pitch yielded a good dividend with a fine chase and catch by Robbie Henshaw, but nobody filled in at scrumhalf from the recycle.

Whereupon Ireland rediscovered their urgency after Rob Herring’s long throw to Aki in midfield earned a penalty exit when he was tackled in the air, and then executed another lineout near halfway.

Hugo Keenan freed his hands to connect with Jacob Stockdale on the left before Peter O’Mahony bounced one tackle on the right touchline. Doris also carried hard again from Henderson’s rip-on and facing a big overlap to his right Duncan Taylor shot out of the line to palm down Aki’s pass.

Taylor was binned, Sexton landed the penalty and Ireland seized their chance. They wasted one penalty advantage with one-off charges and then a strike move going blind before Sexton went to the corner with another penalty.

The maul was sacked but the Scots were offside in the next passage of pick-and-jams, and playing with house money again, this time Ireland used it.

Sexton cross-chipped back toward the blindside where Henshaw, again using his Gaelic football skills, rose above Darcy Graham in the air and Earls beat Price to the breaking ball.

And so finally, in ending a tryless run of 11 Tests with his 31st try, Earls moved ahead of Tommy Bowe to become Ireland’s second highest try scorer of all time. Alas Sexton missed the conversion and Ireland led 11-9 at the interval.

On the resumption, a sweetly angled kick by Sexton found grass before Hogg was tackled by Earls and knocked into touch by the chasing O’Mahony. Hogg had knocked on anyway and Aki charged effectively into traffic off a rock solid scrum. Two carries by Stander either side of one by Doris, which nearly made the line, led to Healy plunging over with O’Mahony and Quinn Roux, on for an injured Henderson, latching on.

Going for the jugular, Sexton found touch in the corner with a long penalty and Ireland were indebted to Stockdale for turning a loose ball into a strong carry. When Murray and Sexton went left, good hands by Henshaw and O’Mahony gave Earls a touchline-hugging finish.

Sexton even landed a touchline conversion. Suddenly it was 25-9, but although Ireland then actually put in a strong defensive set, Van der Merwe turned up in the middle of the pitch at a ruck to dummy and step the first pillar, Herring, and round Stockdale to score.

Scotland were energised, Brown relieving the pressure with a turnover penalty before Porter did likewise. Matt Carley checked with his TMO after an accusation by Brown that he was gouged by Roux, but replays showed Roux’s hand never went higher than Brown’s jaw. Brown then veered off his line to knock Earls to the ground, something which he has done before against Ireland.

After knocking the penalty into the corner, Sexton gave up the fight with his left hamstring. Murray and the Irish forwards built pressure under the posts, Scotland lying all over the ball, despite Hogg’s petulant protestations, for Ross Byrne to push Ireland a dozen points clear.

Better still, after O’Mahony was his disruptive best at maul time, the newly introduced debutant Eric O’Sullivan milled WP Nel at his first scrum in Test rugby. Murray tapped a penalty and Ireland seemed to have scored in the corner after 17 phases but O’Mahony’s boot brushed the touchline. Byrne’s penalty made it 31-16 in any case.

Ireland’s energy in defence and tempo in attack, O’Sullivan also making one big charge in an eye-catching cameo, remained until the last whistle.

It mightn’t appease all the naysayers, but this was a resounding note with which to sign off the year.

Munster can conjure spirit of 2011 as Leinster come to town 07:00
Beibhinn Parsons ignoring the noise as uncertainty surrounds 2021 06:45
Golf clubs focus on retaining members and capitalising on 2020 boom 06:30
Ireland’s lost golf courses: What happens when the gates close? 06:30
Golf club membership in Ireland: What deals are clubs offering? 06:30
Crossword Get access to over 6,000 interactive crosswords