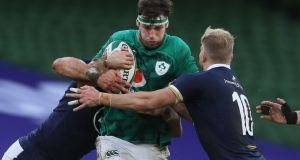 Not yet reliable under high balls (at least he is better than the wobbly Stuart Hogg). Needs to show something special for Ulster in the coming weeks to remind everyone why we got so excited in 2018. Otherwise the Lions tour of South Africa will pass him by. Rating: 6

Tap tackle on Duhan van der Merwe was one of the multiple fires he extinguished with an infectious defensive energy that fuels the entire group. That’s right, the rookie wing is already inspiring veterans like Peter O’Mahony and Cian Healy to do more. Rating: 7

Emptied anyone foolish enough to probe the Ireland midfield but the wily Scots kept seeking the man standing beside him. One brilliant catch and another towering breaking of ball, Gaelic-style, created Earls’s first try. Rating: 8

Kept providing gainline possession. Attempts at creativity are encouraging but he is not the answer to the second player maker conundrum. Rating: 7

Like buses, the 11 game drought ended with two tries. Literally living off scraps, snatched his first off Henshaw’s acrobatic leap to move into second place behind Brian O’Driscoll on the all time try scoring list. Rating: 8

The only pressure on him during an injury stalled Autumn came from Harry Byrne and Ben Healy in the Pro14. Survived the early Scottish bumps and dunts before slowly leaving the field on 64 minutes with Ireland cruising at 25-16. Bad news for Leinster but good news for the Byrne brothers. Rating: 7

Heaped the pressure on Scotland’s back field with hanging box kicks alongside the usual, calming impact on the team but you always want more from the Lions incumbent. Rating: 7

Old fashioned prop’s try on cap 104. Poor hands early on and penalised at the scrum that allowed Scotland go 6-0 ahead but he remains Ireland’s supreme loosehead. Rating: 7

Missed the tackle on Duhan van der Merwe for Scotland’s try. Also missed Henderson with important lineout throw on 16 minutes inside the Irish 22. Still, Ronán Kelleher was unable to dislodge the South African hooker in 2020. Rating: 6

This 76 minute shift felt almost irresponsible. Phenomenal international window considering how dependent Ireland have become on the young prop in a worryingly similar situation to the tighthead residencies of John Hayes and Mike Ross. Leinster will pay the price for this over exposure. Rating: 7

Ulster’s worst nightmare: injured his right knee before half-time. Until then brought a nastiness that this pack needs. Harshly penalised for ripping ball that led to van der Walt making it 9-3. Lovely soft hands put Doris charging into Scottish 22. Rating: 6

Injured. Turned over from one lone carry but he made sure that numerous teammates were not isolated in contact. Like Porter, deserves a winter holiday in the sun. No rest for the 24-year-olds as Leinster travel to the south of France to face a gargantuan Montpellier pack. Rating: 6

South Africa saw a hooker, Munster signed a number eight but, finally, this ideally sized blindside can focus on hurting people with the head down carries interspersed with neat passing. Rating: 7

Fantastic performance and cruelly denied a late try. Forced his way into the team at openside and is showing no signs of giving up the position, especially with contract negotiations postponed until the New Year. Pay the leader his worth. Rating: 8

With only seven caps to his name Doris is already Ireland’s most important ball carrier. Relishes the contact but imagine a game plan that put him into space? Departed injured but returned when Ryan went down. Immense. Rating: 8

Josh van der Flier thundered into the fray only to be immediately turned over by Fraser Brown. Eric O’Sullivan won a scrum penalty and made a few memorable rumbles on debut. Rating: 6

As IRFU performance director David Nucifora stated this week, the first year of Andy Farrell’s tenure as Ireland coach has been “average.” The Wigan bruiser was never been described as such before and one imagines the description of his team, by his boss, rankles to the core of his being. Rating: 6