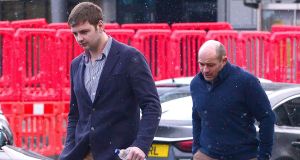 Iain Henderson and Rory Best arrive at Laganside Magistrates court in Belfast on January 31st, 2018 where Paddy Jackson and Stuart Olding were on trial accused of raping the same woman. Photograph: Pacemaker

Rain fell on Iain Henderson and Rory Best as they walked into Laganside Magistrates Court. The incoming and outgoing captains of Ulster wore similarly toned civvies. This was their day off.

The picture on the front page of The Irish Times on Thursday, February 1st 2018 spoke a thousand words. Or one resounding text message: “I am not going to the police, Going up against Ulster rugby. Yea because that’ll work.”

‘The Belfast Rape Trial’ will be intertwined with rugby forever but this was the moment that amplified the case to a far wider audience. Best’s appearance in particular, the Ireland captain in the week of a Test match, ignited a nasty war of words on social media. It created fissures in concrete relationships.

Ulster players Stuart Olding and Paddy Jackson were found not guilty of raping a 19-year-old Belfast student but opinion about what really happened remains deeply divided. The trial became their public shaming and with it a mirror for society to hold up to itself. For many who looked, what they saw was vile.

The investigation had simmered for almost two years. Twice Jackson had avoided being denied entry to the United States as a member of Joe Schmidt’s national squad. But the beginning of this 46-day trial was supposed to be when the story would stop being directly linked to Ireland’s preparations for the Six Nations.

Until Best and Henderson went to court. Opinions and perspective exploded inside and outside of their Carton House base in the week that also launched the hottest winning streak Irish rugby team will probably ever know (calendar year victories in Paris, at Twickenham and over the All Blacks will hardly be repeated in our lifetime).

The players had Wednesday off before playing at Stade de France. The lock and hooker drove north from Kildare to Belfast. They were not dissuaded by the fact the woman accusing their team-mates of sexual assault would be providing her testimony. That decision changed how many, many people view these professional athletes.

Local heroes supporting fellow local heroes, in front of a jury, was the precise imagery the teenager feared when texting a friend that she wasn’t willing to take on the might of Ulster Rugby. Either this didn’t occur to Best and Henderson, which reveals their emotional intelligence, something rugby players pride themselves on, or it was a calculated move.

Best has provided three evolving explanations for why, on a precious day off before one of the biggest games of his career, he walked into the full glare of such a public criminal trial: firstly, to see about becoming a character witness for Jackson. Secondly, the importance of friendship as an example to his own children. Lastly, he claimed he was incredibly naive.

“We sign out on a Tuesday night and Wednesday is our day off so technically we don’t need permission to do stuff in our own time,” said Best, after the Irish management handpicked a journalist to ask him the first question immediately after victory over France in Paris the following Saturday night. “The reason I was there, it’s on the record I was called as a character witness, and I was advised that it is important that I got both sides of the story so I could make an informed decision about that.”

Best’s character witness testimony never came to pass but in October 2018 he doubled down on his reasoning.

“I feel that it’s a lesson I hope my kids take from it,” he told BT Sport. “If you have friends that are in trouble and they need a bit of help and support, and if they are promising you that they have done nothing wrong, even though people may not think it’s the right thing to do, I think it is.”

What’s certain is a large and loud section on the island of Ireland hold unshakeable opinions on what his appearance will always represent.

The trial’s painstaking witness accounts provoked feelings of hatred and bitterness that linger. You hear it in people’s voices, from either perspective, whenever the subject rears its head.

The trial of Paddy Jackson and Stuart Olding wasn’t one of those “I’ll sit this one out” moments in our history. The vast majority of people – north and south – formed a view about what happened in the upstairs bedroom of Jackson’s house party in the days after the Ireland team had returned from a South African tour in June 2016.

“Paddy became like a wee brother to me,” wrote Best in his autobiography.

Best had planned to take Jackson and Olding to Lord’s shortly after the incident, for the Test match between England and Pakistan, only to receive a Facebook message from Jackson saying neither could attend as they “both lost their phones.”

“I remember thinking at the time it seemed a bit strange,” wrote Best. “I looked at their WhatsApp accounts and their ‘last seen’ time was almost exactly the same. I started thinking, They might have both lost their phones, but what are the chances of their ‘last seen’ on WhatsApp coinciding? I knew something wasn’t right.”

Best elaborated on his decision to attend court, mainly due to Joe Molloy’s line of questioning, in January 2020. The interview, broadcast on Newstalk, remains the subject of libel proceedings against Best by Jackson’s legal team during the trial.

In the interview, Best expressed his remorse for causing any undue distress to the “poor girl”. If he’d had his time back, he would not have gone. He now accepts he was wrong and he had been naive.

What happened on Best’s re-entry to Schmidt’s famously strict environment may never be fully known but there followed a feeding frenzy around the squad as the #NotMyCaptain hashtag ran rampant across Twitter.

What we did witness at the Thursday press conference was Schmidt being asked if Best had permission to go to Belfast: “I have got no comment on any of that.”

The only follow-up question sought the coach’s view on Best’s appearance at the trial.

“We’re not in a position to comment on any of that,” he responded. “It’s a legal matter.”

However, in his autobiography Ordinary Joe, Schmidt stated: “None of the management were aware that the two players were going to attend, and the outrage that followed was difficult for everyone in the group.

“It was uncomfortable for all of us but it particularly magnified the stress that Rory was under, and he considered relinquishing the captaincy.”

What should have been one of the great nights to be reporting on Irish sport – the Johnny Sexton drop goal in Paris after a live tutorial of Schmidt’s methods over 41 phases – proved a truly miserable experience. The post-match mood was rancid for those who cared to notice.

It was over 20 years ago when I first heard professional rugby players boast about group sex. What’s apparent – and we’re working off the explicit WhatsApp messages sent by the former Ulster team-mates – is far too many male athletes still consider threesomes with team-mates and one young girl as best practice to finish off a heavy night of booze.

From reading Anna Krien’s Night Games it is clear that some twisted Spartan brotherhood ideal remains embedded in the culture of team sport the world over.

Plenty of rugby people still find it hard to comprehend why so many were so hard on “Paddy and Stu”. They cannot stomach, even in the #MeToo era, the reasoning for them being cut loose by the IRFU in April 2018.

We know sponsors like Bank of Ireland were “seriously concerned” by the players’ behaviour. We know that Willie John McBride, the ancient symbol of Ulster rugby, attempted to keep the pair in Belfast with a comment – “As far as I am concerned, these young men have learned their lesson” – that only fanned the flames.

Also, Jackson’s immediate post-trial stance completely missed the contrite tone necessary in that moment. Olding grasped this with a carefully worded apology but the die had been cast.

It seems certain the pair will finish once hugely promising careers in exile. Particularly Jackson. On witnessing his prodigious talent at Methodist College, he looked destined to wear the Ireland 10 jersey, and he was shaping into the natural successor to Sexton. Now the 28-year-old plays for London Irish, but only after the club weathered a heavy publicity storm, even losing sponsors, after signing him from Perpignan.

Both men were found not guilty, yet they continue to pay for what they did admit to doing that night and how they joked about it the next day.

They are not alone. Everyone involved in this trial suffered to some extent.

A rare Grand Slam followed at Twickenham. The achievements of that year will stand the test of time as Schmidt’s squad conquered Australia before beating New Zealand on a glorious night in Dublin. The sporting script is irrefutable: Rory Best’s Ireland ruled 2018.

From media dealings, Best seems like a decent man. Polished. Intelligent. Heroic on the field.

Why he went to court is decipherable from comments spread over two years. Naivety, loyalty or something else, the decision was always going to be a calculated risk. It backfired spectacularly.