With a fair wind, back-to-strength Ireland can sink France

Joe Schmidt knows his side have to win this one, and now he’s got the team that can do it 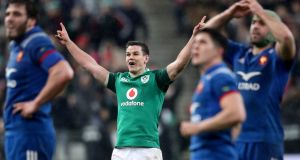 Leaving aside staying in the title hunt, this is actually massive. The shockwaves from the defeat by England on opening day, which ended a five-year unbeaten home record in the Guinness Six Nations and that record 12-match winning home run, reverberated for weeks, and are still rippling. But, heading to the World Cup later this year, the self-doubts will be as nothing if Ireland have lost both home games in the Championship.

Each team arrives here after three games seeking to find themselves, with France having made the bigger quantum leap when striking/stumbling upon a cohesive winning formula in round three. Whereupon they put the guillotine in the shed and picked an unchanged side for the first time in a dozen years and 76 matches. Sacre bleu indeed.

Hence, if Ireland can, like France, rediscover their mojo, we could be set fair for a cracker, allowing for the Sunday afternoon kick-off and the forecast scattered showers and “fresh westerly winds” in what will be the start of the long goodbye, given it’s Schmidt’s last competitive home game.

We’ve got to get into this game, stay in this game and then we keep the crowd with us

Schmidt agreed the ingredients were there. “I’m hoping that the weather holds out, it’s a little mixed but it looks like it won’t be too bad, maybe quite blustery. They’re not going to play within themselves I don’t think. I think they’re coming to play. Likewise, I don’t think we’ll try to play within ourselves.”

Noting four more requests from him for tickets this week, he said: “The enthusiasm of our support has not changed and we’re incredibly appreciative of that. We’re incredibly conscious of it as well. We know in those last 10 minutes against England, it’s hard to be really behind the team when the team’s out of the game.

“We’ve got to get into this game, stay in this game and then we keep the crowd with us. It’s a responsibility we’re conscious of and one I hope we deliver on.”

How times have changed. Between 1976 and 1999 Ireland won one of 26 meetings. With five wins in the last six, this has been a rare era of Irish supremacy. France have not won in Dublin since 2011.

Yet although Ireland were commanding enough winners in that bruising World Cup pool decider in Cardiff, only twice in the Championship since 1975 have Ireland beaten France by more than a score. Even in the gilded Schmidt era the results have read 22-20, 18-11, 9-10, 19-9 and 15-13.

France are, again, an unpredictably fascinating case. It truly would be a duller, Anglicised world game without them. Coming off the back of their implosion against Wales and shameful rout by England, they opted for a Toulouse-infused approach.

Five minutes into that Scotland game two weeks ago the 22-year-old Toulouse scrum-half Antoine Dupont ripped the ball from Nick Grigg outside his own 22 and facing his own line.

Thomas Ramos, the 23-year-old Toulouse full-back making his first test start, steamed onto the ball and ran infield from right to left, to line with his Toulouse kindred spirits Romain Ntamack (19), Gael Fickou (who spent six years at Toulouse before being revived at Stade Français) and winger Yoann Huget.

But the point is that they have put their faith in young Toulouse backs and trusted their ability to play old-fashioned French heads-up rugby, while amalgamating it with a heavyweight pack and the brutish carrying game of their forwards and Mathieu Bastareaud, who’s also part of their offloading repertoire.

“You underestimate him at your peril,” said Schmidt. “He’s incredibly good over the ball so he’s a real threat to your wide ruck, to your midfield ruck. He isn’t just that wrecking ball that people would think he is.”

As for Dupont, whom he has watched since his Castres days, Schmidt also noted the improvement in his kicking game against Scotland, and added: “He is a nightmare, the amount of times he beats the first tackle. He is so powerful and so low to the ground that he’s very hard to contain.”

He also noted the need to limit Dupont’s time and space around the ruck, and staying alert to his quick taps, and the “multi-faceted” game of Romain Ntamack.

Like Toulouse, this French team will clearly seek to transition from defence to attack with lethal speed. But, helpfully, Ireland also play much like Leinster, and will have done their homework. No less than Leinster at that RDS rematch, Ireland will seek to limit France’s scope to transition to attack off turnovers or loose kicks, take them to places that an under-strength Scotland did not, and expose Ntamack’s defence.

Ireland haven’t lost both home matches in the Championship since the last Five Nations in 1999. For a variety of reasons, they have to win, and they should do.