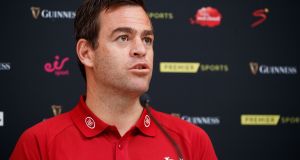 With Australian Stephen Larkham, Irish manager Niall O’Donovan and South African defence coach JP Ferriera, Johann van Graan’s Munster team could be part of any World Cup campaign. Van Graan is also waiting on the arrival of Lion and England frontrow Graham Rowntree, the one figure who is involved in Japan.

Rowntree’s arrival to Munster depends on how Georgia plot their way through the pool phase. When they are finished, the canny ex-pro has a week to kick back and then it is on to Munster. Van Graan has no doubts about his English acquisition.

“Graham, a British Lion, played at Leicester, very much like Munster,” he explains. Enough said.

But the mood at least of Van Graan is tied to his South African team, which he left in 2017 when Allister Coetzee was in charge, to pursue a head coach job in Munster. He knows current Springbok coach Rassie Erasmus, as well as defence coach Jacques Nienaber, in the career swirl that has been South Africa and Munster over the past few years. Then, of course, Felix Jones.

“He got an opportunity to go to a World Cup and he has grabbed it with both hands. He is a man of integrity,” says Van Graan.

Munster face Connacht on Saturday and he may not see all of the opening Springbok game against the All Blacks live. But he will be watching what happens in Japan very closely, not least of all to monitor how his own players progress.

“I’m a guy for numbers and you can see what happened at previous World Cups. If you look at history, every team that has won the World Cup have won all of their pool games,” he says. “If this is going to continue certainly the results on Saturday and Sunday might have a massive bearing in the end.”

But numbers are not everything. At least he hopes so as no team that has won the Rugby Championship has gone on to win the following World Cup. With outhalf Handre Pollard kicking South Africa to their first win in the competition since it was a Tri-Nations, that doesn’t sit well with the coach.

“That’s certainly what it shows. But I think South Africa are in a very good spot,” he says. “I think they have been flying under the radar and they will be very dangerous at this Rugby World Cup. I think their forward pack are very good at this stage. I was fortunate to work with those forwards for six years. The depth they have got there.

“If you look at the team that played in the World Cup semi-final four years ago and the team they could possibly put out now, it’s very similar. Just with the experience, they are all seasoned campaigners and if you add Pollard, Faf de Klerk and Willie le Roux at 15 it’s a very good side. So I think they will really do well.”

From an Irish perspective the possibility of a collision at the quarter-final between Joe Schmidt and Erasmus might cause some behind the scenes dilemma in the Springbok camp. But Van Graan dismisses any intelligence downloading from Jones. Munster coaching aside, Jones also assisted Schmidt with the national team’s tour of Japan in June 2017. His knowledge of the Irish players is broadly based.

While it is intriguing to what extent his loyalty might be split between his country and an employer who has given him a wonderful opportunity, it’s not that simple.

“In these days of technology and video analysis, getting information from other teams – I don’t think it makes such a big difference,” says Van Graan. “Most teams in the world focus on themselves. What if teams change on the weekend. I wouldn’t read in too much to that.

“Rassie has been part of the Irish system before. He’s a quality man and a quality coach. South Africa might not even play against Ireland. Certainly Felix will add value across all parts of the game.”

First things first. The bright light over the horizon is not Ireland or Scotland but the heavyweight contest of the opening weekend for early tournament bragging rights. Steve Hansen, the ageing great and a title belt around his waist, Erasmus the fleet footed, modern upstart.

“South Africa and New Zealand – if you look at the last few outings were close,” says the Munster coach. “Back in 2017 I think it was a one-point loss to South Africa. One in Wellington, the All Blacks came from behind in Loftus and beat South Africa in the last minute. This year it was a draw. So I think it’s going to be so close. I think both teams know if you lose your first game it is not the end of the road.”

Not the end, the very beginning.