Gerry Thornley in Japan: How many journalists does it take to get the train to Tokyo?

Japan seems uber-efficient and productive, yet it’s safe, and personal space is not invaded 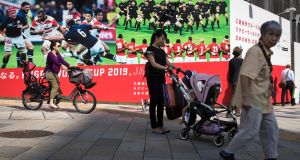 A variation on an old one to begin with. How many Irish journalists does it take to negotiate a route by train from Chiba, an hour or so by rail to Tokyo, to the Japanese capital in search of that precious, if sometimes scarce, commodity, quotable All Blacks gold?

In this case four, and even then we took the wrong one initially, meaning it took a bit more than an hour or so before Google Maps eventually led us by the hand to the Conrad Tokyo.

The train was, appropriately enough, called the Boso, which really should have been spelt with a Z.

Eventually though, it seems all trains lead to Tokyo. It’s just a question of whether you make it to Tokyo Station, an enormous maze where you could conceivably spend the rest of your day, with just one stop.

There’s a two or even three-stop strategy in relatively smaller stations, which are usually equidistant on Google Maps, although all signs are in English as well and there is a helpful colour code.

And, yes, they are always on time, to the minute. It’s not exactly Dublin Bus, or the “train delayed due to a fault on the line” otherwise known as the Dart, or, indeed, the Luas.

Despite what my colleague Gav Cummiskey believes, Chiba really isn’t that bad. Having been unimpressed by the place, he’s now doubling down. But the hotels are nice, the restaurants are good (even if they are generally located on the upper floors of malls), and so too the cafés and bars. Other rugby tours, especially in June, have altogether grimmer stopovers.

Chiba has upped its game since 2002 when some of the travelling Irish media corps were on duty at the football World Cup. The spectacular views of the Pacific Ocean from the top floor of the squad’s hotel are incomparable to the manmade lake adjoining the squad on the outskirts of Bordeaux in 2007.

That said, with the eight-hour time difference and the damned internet, less late-night leaks of player injuries would be welcome.

The people are probably the most polite, respectful and helpful you could meet anywhere, and how they queue! On Monday in Chiba they were 10 abreast, circumnavigating the entire convention centre to the nearby baseball stadium for a gaming convention, thousands of free hand fans flickering frantically in the heat.

In Kaihimmakuhari station they form their own, self-patrolled, zig-zagging queues as if there are imaginary rails. It would never catch on in Dublin Airport.

Along the journey into Tokyo the ports are alive with activity, the roads busily ferry drivers and the streets of Tokyo hustle and bustle with workers. Japan seems uber-efficient and productive in all it does. Yet it’s safe, and personal space is not invaded. No car horns beep. They don’t seem to do road rage.

The first venture into Tokyo on Sunday evening, more R&R for our party of three, had echoes of Leicester Square and Time Square multiplied many times over.

The narrow roads containing restaurants and bars echoed that Sky Atlantic teaser when he swallows a piece of paper and she hops on the back of the moped and speeds away. And the food is fantastic. Hence they live healthily and long.

The back pages are devoted daily to sumo wrestling. The inside sports pages feature baseball or football, with one paragraph a day concerning an item on the Rugby World Cup.

Apparently there are massive billboards showcasing the World Cup. Didn’t see those, but then again Tokyo is a big place, with an estimated 13.4 million people, over 10 per cent of Japan’s population.

There are some shop windows bedecked in rugby images or replays of past matches, and you might randomly come across a mannequin of a Ninja warrior on a bench with a miniature rugby ball on its head. But the World Cup’s imprint seems dwarfed by daily and nightly life, and will be by next year’s Tokyo Olympics.

All the while dark clouds are gathering. Greg Feek has also been coaching with the NEC Green Rockets these past two years, and the first word he used to describe the weather at this time of the year was “unpredictable”.

“You have to prepare for all situations out here. The dampness could be there whether it rains or not, with the humidity.”

The worst of the weekend’s rain is now forecast to hit Yokohama on Saturday, and following on from the All Blacks and the Springboks that day, howling winds and rain are due for Sunday when Ireland meet Scotland.

This has led to reports of the Scots applying shampoo to their rugby balls, and the Welsh using baby oil. This in turn led to Steve Hansen’s memorable reaction when asked about Warren Gatland lubricating the Welsh balls. “I think you might want to re-phrase that, mate.”

Even without Hansen, rugby’s most entertaining press conference front man, as it transpired the All Blacks were relaxed but also in test match mode, and there was gold at the end of the trek to the Conrad Tokyo, a palatial base entirely in keeping with their status.

They too have been preparing for thunder storms, albeit the heat is somewhat removed from a New Zealand winter.

“Well, coming from Dunedin, it’s way different,” said Aaron Smith. “Before we left Auckland to come to Japan I did my last running session in a tracksuit, beanie and hoodie so it’s vastly different to here. We’re having cold towels and slushies on the way to training just to get hydrated.”

When asked by a Japanese journalist to name their own rugby attributes, Aaron and Ben Smith were briefly nonplussed. So instead they spoke of each other’s strengths.

Ben singled out “Aaron’s speed of pass, just allowing the backline to have heaps of time by the way that he can get it out and I think he’s got a pretty solid kicking game”.

Aaron: “This is a great question! I’ve waited 10 years for this!” He then returned the compliments, citing Ben’s X factor and leadership.

Ben concluded with a startled laugh: “This is like a counselling session!”

Our party then reduced by half, the three-stop strategy worked a charm for the trek back to Chiba. So it only took two of us after all, albeit with the invaluable help of good ‘oul Google Maps.

You really would be lost in translation otherwise.

1 Maradona’s terrible, terminal journey from human to myth divided him in two
2 Here is your handy guide to sport on television this week
3 Rapid Vienna take the gifts on offer as Dundalk mess up their lines again
4 Feidhlim Kelly: Athletics competition needs a roadmap to recovery and fast
5 Andy Farrell hands Billy Burns first Ireland start against Georgia
Real news has value SUBSCRIBE