Rugby World Cup: Conway and Larmour named in Ireland side for Scotland clash 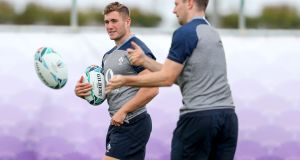 Kick-off: 8.45am, Sunday (Irish time). Venue: Yokohama International Stadium. How to follow: The Irish Times liveblog will begin at 7.45am. On TV: Live on Eir Sport, RTÉ 2 and UTV.

As expected, if not necessarily feared, Ireland will go into their crunch opening Pool A game against Scotland in Yokohama on Sunday with a back three of Andrew Conway, Jordan Larmour and Jacob Stockdale.

This follows confirmation, despite protestations to the contrary, that the experienced duo of Keith Earls and Rob Kearney have been ruled out due to niggling quad and calf issues, in addition to the hamstrung Robbie Henshaw.

The Irish management have stressed that had this been a quarter-final game, Kearney and Earls would be fit to play but due to the risk involved they were kept back for the Japan game.

Even so, with the forecast less than promising, Kearney’s presence would have provided something of a comfort blanket given his experience, the way he covers the backfield and his communication skills with those around him. On top of which, he looked as fit as a flea in his try-scoring performance against Wales last Saturday week.

It also transpires that Joey Carbery has been given additional time to regain full fitness before being risked, again with a view to the Japan game six games subsequently, so Luke McGrath, Jack Carty and Chris Farrell, as the last three fit backs standing, are named on the bench.

As it also turns out, Larmour has been selected at number 15, with Conway wearing number 14 and Stockdale in his customary position on the left wing. Between them they have started 36 tests, with the 23-year-old Stockdale by some distance the most experience having started 21 of them.

As a back three, this trio have only ever started one game together before, namely in that win over Italy in Chicago in November last year when Larmour scored three tries in a 54-7 win.

Elsewhere, at least, there is plenty of familiarity. In the absence of Henshaw, Garry Ringrose will resume his partnership with Bundee Aki for a ninth time.

In front of them, Conor Murray and Johnny Sexton resumed their well-oiled half-back combination of more than 50 tests together as the starting half-backs, while the pack is essentially a first choice set of forwards.

Rory Best, about to play in his fourth World Cup, will pack down between Cian Healy and Tadhg Furlong, James Ryan and Iain Henderson will start in the second-row, and the back-row will consist of Peter O’Mahony, CJ Stander and Josh van der Flier.

For the retiring Best this will be a shot at a last World Cup as it may well be for the 33-year-old Sexton. Ireland’s kicking coach Richie Murphy believes is at the peak of his powers despite just one warm-up game, and the huge weight of expectations on his shoulder, perhaps more so than any other Irish player.

“The one thing I would say about that is he’s learned to deal with that really well over the last while. He seems quite calm, very focused and massively up for what’s going to come up over the next while.

“I’m not saying he’s not the best he’s ever been either, by the way. Do you understand that?” asked Murphy with a chuckle. Yep, thousands didn’t, but we did.

There have been signs of Ireland trying to evolve their kicking game in the warm-up games, in what has become a more common method of finding space in behind defences.

“I think people’s attack kicking game has become very prevalent over the last while,” said Murphy. “People are reacting to the way defences are moving over the last while and what opportunities that gives them. So, I suppose that’s been – I wouldn’t say it’s completely changed – but it’s more there than it was in the past.

“From a defensive point of view you have to be careful about what pictures you paint, because there’s always somewhere – no matter what defensive system you have – there will always be a weakness in it somewhere. It’s just trying to hide those weaknesses as best you can.”

Bearing in mind the anticipated conditions, with the pitch likely to have been cut up by the New Zealand-South Africa game the day before, inventive attacking kicking games are likely to become a tactic of choice, as is usually the case given how difficult it is for players covering the back field to gather grubbered kicks cleanly.

This, of course, heightens the threat posed by Finn Russell’s rich array of delicately placed grubbers as well as crossfield kicked passes.

“Yeah, very much so,” admitted Murphy. “His short kicking game is spot on. His ability to put the ball through along the ground, he’s got a real soft touch on his chip kick and his ability to kick to the edges on kick-passes and stuff like that is really good.

“So, the ball on the ground is going to be quite slippy and wet, so trying to tidy that up is going to be difficult along the line and we’ll have to be very aware about that.

“It’s about how you set up and where you leave the space. There’s always going to be space somewhere so you’ve got to just make sure that you limit the options for them as much as possible.”

At the other end of the spectrum from Best and Sexton, Josh van der Flier will be making his World Cup debut. His first memories of the tournament are of watching the 1999 final.

“We played a match that day with Wicklow Rugby Club and I lost a tooth. The tooth was coming loose and I’d lost it. I remember watching the final and holding an ice pack to my mouth. I don’t think the ice pack was doing much, it was probably just to make me feel better, but that’s probably my earliest memory.”

“It’s mad really,” he admits. “It’s been a bit surreal to be finally in match week after, knowing for two years that this was the first game and the one everyone was aiming for.”