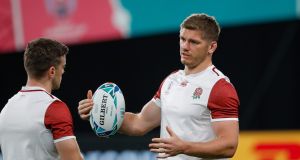 George Ford and Owen Farrell have been named together in England’s starting XV for their Rugby World Cup opener against Tonga, with Eddie Jones unleashing his first-choice side in Sapporo on Sunday.

As reported by the Guardian on Wednesday, Jones has opted to select his strongest side available despite hinting last week he would not, with Manu Tuilagi named at outside-centre as England stick with the same midfield trio who started in the record warm-up win over Ireland last month.

In total, 13 of that side have been selected with Anthony Watson replacing Joe Cokanasiga, who has been carrying a knee injury, and in a somewhat surprising move in the second row, Courtney Lawes is selected ahead of George Kruis. Joe Marler has also been selected despite missing the majority of England’s training session on Wednesday.

It is only the second time since last June that Jones has opted to pair Ford and Farrell together, but both shone against Ireland. Jones will also be mindful that selecting two playmakers enables England to adopt more of a passing game in the face of the expected physical onslaught from Tonga.

“The focus this week has been about getting right for Tonga,” said Jones. “We have had a good seven days in Japan where we have acclimatised really well, our sleep patterns are good and the physical conditioning of the players is outstanding. We have been able to add a bit more on our team togetherness and cohesion, too.”

Ford and Farrell is also a tried and tested partnership at 10-12 for Jones, who played the two together for all but one game of the 18-match winning run to start his tenure. He largely continued with it thereafter but after England were defeated the first two matches of last summer’s tour of South Africa – extended their losing run to five Tests – Jones turned to Danny Cipriani for one match only before installing Farrell as his number one fly-half.

Elsewhere, Elliot Daly is at fullback with Anthony Watson and Jonny May on the wings while Ben Youngs is chosen at scrum-half. Joining Marler in the front row is Jamie George and Kyle Sinckler while Itoje is Lawes’s second-row partner.

In the backrow, Tom Curry and Sam Underhill - dubbed the “Kamikaze Kids” by Jones - play their second match together having dovetailed to impressive effect against Ireland. Billy Vunipola is at No8 against the country of his heritage while Lewis Ludlam is on the bench. Neither Mark Wilson nor Cokanasiga, who have both been carrying knee problems, are in the 23-man squad.

Joining Ludlam among the replacements is Kruis as well as the front-row trio of Luke Cowan-Dickie, Ellis Genge and Dan Cole. Willi Heinz is the replacement scrum-half while Henry Slade and Jonathan Joseph are both also in the squad with the Exeter centre set for his first outing since 2 June having recovered from a knee injury.

“Now it is about putting in a game plan against Tonga and it is important to be tactically right,” added Jones. “We know they are going to be ferocious and full of pride and passion. They are a side if they get a bit of momentum they can be very dangerous and are well coached by Toutai Kefu. They have a great World Cup record and we will need to be at our best on Sunday.”