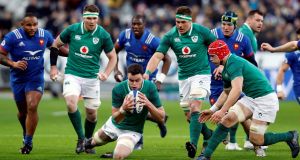 The boy who would be king rises up in Paris.

Recently, in conversation with a former Ireland international, we naively compared James Ryan to Paul O’Connell.

“Would Ryan trample all over a player who’s near his ball? Has he beat the sh*t out of anyone in the AIL?

Or just James Ryan will be himself.

The Ryan/O’Connell comparison is too simplistic. And anyway, Dan Leavy is closer to a second coming of the Young Munster maniac, just in flanker form. That slack jaw ravenous dog of war being unmistakable.

Ryan’s link to what has come before – unless he becomes a unique entity onto himself – has more in common with Ian Jones or even Victor Matfield’s remarkable agility for such a long frame. Of course, such praise is premature but he does play like these locking lords when Jones and Matfield were 21.

Ryan’s true self will reveal itself on the grandest stage. That much is established. A leader all the way through age grades, a man-child who guided Ireland to the under-20 World Cup final in 2016, beating New Zealand yet walloped by England.

Joe Schmidt has fast-tracked him last summer as much as Leo Cullen – who knows a little about living the towering prodigy life – has kept tighter reins at Leinster.

Cullen’s mind could be altered, as the Saracens threat of Maro Itoje and George Kruis looms in late March, from his current Leinster starting locks, Scott Fardy and Dev Toner, by what happens on St Patrick’s Day against Maro and Kruis.

Or Ryan will get injured again. That has been a recurring theme for these pure bred professional 20-somethings.

See Leavy’s stop-start entry into the elite ranks, playing an alternating pain game with Josh van der Flier and Seán O’Brien as Cullen has avoided a clear decision between the three opensides because they are never fully functioning at the same time.

That said, Ryan held firm on Saturday for 68 minutes. And what a Six Nations debut it was, topping the tackle count with 12 hits, two more than Robbie Henshaw, and ranking third in the Irish ball carriers with 15 for 27 punishing metres. Only the most valuable project players – Bundee Aki (16) and CJ Stander (a freakish 24 runs) – took more frontal contact.

Ryan needed only seconds to settle with a clean lineout at the tail (his new home) before mopping up Iain Henderson’s steal and recovering from a poor Rory Best throw as the beginnings of a world class set piece, add Peter O’Mahony to this, was evident.

Toner, however, seems like the missing piece as the maul struggled.

A slight moment of error was born from Ryan’s positive attitude. A carry on 25 minutes prompted him to flip ball up to Conor Murray but the scrumhalf was unprepared and a Rabah Slimani fly hack needed Rob Kearney to rescue the situation near Ireland’s try line.

Paris proves the promise is being fulfilled by phenomenal St Michael’s College teenagers (Leavy and Ryan are easily the best schoolboy talent since Rob Kearney and Luke Fitzgerald a decade before).

“James was immense,” agreed Joe Schmidt. “He carried, he tackled, he worked hard, his lineout work was really efficient as well. Dan Leavy made an immediate impression when he came on. He got over the ball. He got off the line. He carried strongly.”

But more interesting than coach praise is what Ryan’s predecessor at number five thinks of him. Not Toner (“I’m not giving up without a fight,” he said in November) but O’Connell from his temporary perch in the BBC studio.

Maybe they will join forces some day.