Jones wants ‘brutal’ and ‘ruthless’ showing from England side 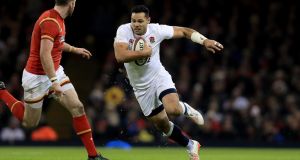 Back when Eddie Jones used to rise early to watch Six Nations games in his native Australia, one thing always caught his eye. The matches tended to be played at a slower pace than in the southern hemisphere, but their physicality and set-piece intensity struck him every time. Now he is coaching England those first impressions remain unaltered, and woe betide any of his players who are insufficiently “brutal” and “ruthless” from the first whistle in Rome’s Stadio Olimpico on Sunday.

It is the bluntest of manifestos, with the choice of the forceful Ben Te’o at outside-centre against the Azzurri ahead of Jonathan Joseph further reinforcing the point. As far as Jones is concerned, the chief prerequisite of Test selection is a collective willingness to run straighter and harder than the other mob. Defend with a similarly full-on mindset and, as proven over the past two years, winning games of rugby – and championship titles – suddenly becomes a whole lot easier.

Never mind that Te’o has not played for his club Worcester since mid-October and has made only one previous start for England. Jones saw enough during a no-holds-barred training session last Friday in Portugal to trust his fitness and will be sorely disappointed if the 31-year-old meanders back into the fray.

“None of these blokes can think past the next game because they don’t know whether they’re going to be in the team. If he [eases himself in] there won’t be a Wales. He’ll be back eating Worcester sauce. He’s got to put his best foot forward because if he cruises he won’t be there for a while.”

Much the same applies to England’s pack, whom Jones acknowledges still have a way to go in terms of consistency. In the absence of Billy Vunipola there was never much prospect of England going in without a big blindside presence, and Courtney Lawes and Sam Simmonds, in particular, will now be expected to deliver the yardage gains and bruising intent that shape games at this level.

“We’re in this tournament to win it,” said Jones. “We want to set the tone early, run through them, create space, smash them at the clean-out, get on the front foot. And when they get the ball they’ll see this white line of jerseys coming at them. They’ll have nowhere to go. We want to be brutal and absolutely ruthless and that’s the team to do it.”

Dylan Hartley, the captain, is also demanding England flex their muscles. “That’s ‘Rugby 101’. You need to be physical, and clinical. We’re challenging ourselves not to have ebbs and flows, or choosing when to dip in and dip out. We want constant intensity from the guys.”

England can call on more experience than seemed likely at one stage, with 689 caps in their starting XV, and have never lost to Italy either home or away. But this is the Six Nations and Italy will be telling themselves their hat-trick-chasing visitors are not totally invincible.

In addition to Te’o, Jack Nowell, Mike Brown and Chris Robshaw are also only just back from injury, with Nowell’s availability on the bench surprising even Jones: “Seven days ago he was going back to Exeter to eat pasties, now he’s going to Rome where they eat pasta.”

Add in the unavailability of Vunipola, Elliot Daly, Nathan Hughes, Joe Marler and James Haskell and their depth is also being tested. If Mako Vunipola were to tweak something in the warm-up, for example, the next man off the rank is Alec Hepburn, the shaggy-haired Exeter loosehead about to enter his first seething Six Nations cauldron. The 25-year-old Hepburn – who shares a house with his team-mate Harry Williams, grew up playing Aussie Rules football in Perth and also once played junior rugby at Henley alongside Italy’s outhalf Tommaso Allan – was a member of the England Under-20 side who won the junior World Cup in 2013, but Italy are not known for gently greeting callow Test props.

In private, however, the Azzurri remain more wary of England’s pack than any other side in the Six Nations, with the former France hooker Marc dal Maso the latest consultant sighted in Bagshot this week. They also cannot rely on the same “fox” strategy that threw their opponents off the scent at Twickenham last year. The laws have now been tweaked, ruling out any repeat of the tactic of not contesting rucks and thus removing the offside line.

Ironically, one of the England players most affected was Te’o.

“We played him against Italy last year and ‘the fox’ got him big-time,” said Jones, who was subsequently impressed by Te’o’s strong showing for the Lions opposite Sonny Bill Williams. “He wants to go fox-hunting this week. If there are no foxes out there, he might have a chance. He’ll add a different dimension at 13 for us. We want him to hit the line hard, that’s what he’s good at.”

It is worth remembering, even so, that Italy were 10-5 up at half-time and trailed 17-15 with 10 minutes to go. England’s last two visits to Rome have been blow-outs but O’Shea has made them fitter, and Alessandro Zanni’s 100th cap offers further motivation. The hosts may not fold in the final quarter so readily this time but have exceeded 20 points just once in this fixture. Expect England to take a direct Roman road to a try bonus point.

Munster’s Alex Wootton to join Connacht on year-long loan deal 13:01
Angling Notes: A strange fishing day 12:52
Lewis Hamilton the fastest in Austria Grand Prix practice 12:27
Ole Gunnar Solskjaer: ‘The sky’s the limit’ for Mason Greenwood 12:07
Monica Seles: The warrior queen who could have been the best ever 11:25
Crossword Get access to over 6,000 interactive crosswords