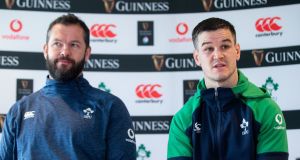 Ireland head coach Andy Farrell and captain Johnny Sexton at the Ireland Rugby press conference in Energia Park, Donnybrook on Friday: ‘There are a lot of ifs, buts and maybes.’ Photograph: Tommy Dickson

Although Andy Farrell admitted he and the Irish squad remain in the dark about a possible date for rearranging next Saturday’s postponed Ireland-Italy game in the Guinness 2020 Six Nations, if it is ever to be rescheduled it’s unlikely to take place before next October.

The IRFU is contractually obliged to play the game at the Aviva Stadium, and finding a date before the first weekend in May – when Leinster could be hosting a Heineken Champions Cup semi-final on the 2nd or 3rd should they beat Saracens at the same venue in the quarter-finals – looks unlikely in a congested and ever-threatened rugby calendar. After that point, the stadium is under lockdown for the Uefa 2020 finals.

“There’s a few dates being bounced about but they’re just ideas at this point in time, so we haven’t got a clue really,” admitted Farrell following the squad’s public training session with the Irish Under-20s at Energia Park. “There’s a lot of ifs, buts and maybes, so as far as we’re concerned we’ll do what we’re told. We obviously want to play the game.”

A more pressing concern for the Six Nations organisers is the threat to the remaining fixtures due to public health concerns over the spread of the coronavirus, particularly Italy-England next Saturday March 7th, and France-Ireland on March 14th.

All the leading figures in the Six Nations and the respective unions and federations will be in Paris from this Monday for a three-day World Rugby symposium which “aims to accelerate solid injury-prevention progress”.

With the IRFU, FIR (Federazione Italiana Rugby) and the Six Nations already in regular dialogue, all relevant parties will meet to discuss the remainder of this year’s tournament in Paris. Decisions regarding the final two rounds of games – whether to play as scheduled, postpone or, least likely of all, play behind closed doors – will have to be made early next week.

In the meantime, following a thorough review of the chastening defeat by England, the Irish squad will press ahead on the premise that the French game will proceed as scheduled. To that end, they will train next week as normal until Thursday before then breaking up for the weekend.

“We’re not trying to stand still over the next couple of weeks,” said Farrell. “I think that if we do that right, we can take advantage of the rests over the weekend. “We saw that at the World Cup didn’t we?” he added in reference to England, New Zealand and France having their final pool games cancelled before the quarter-finals.

“People take advantage of that and we’ll watch France play Scotland over the next couple of weeks and we’ll assess that as well and we’ll prepare accordingly.

“I think the best thing about the [French] game really is it’s not going to be too dissimilar to the one that we just had,” said Farrell, in reference to Ireland’s last outing in Twickenham, and it remains to be seen if the postponement of the Italy game tempers any plans to experiment.

“Everyone said at the start that they expected us to win the three home games and then the challenge was always going to be the two away games. We’re gutted with our last performance, but the one going to Paris is very similar in many ways because they’re a big, strong, aggressive side that kick the ball a hell of lot, pressurise you down in your own half, have good, solid defence, a good set-piece and they’ll challenge you physically, so we’ll how far we’re gonna get over the next few weeks.”

No player took the England defeat worse than Johnny Sexton, who admitted it took him three or four days to overcome his acute disappointment with his own unusually out-of-sorts performance. This had been compounded by his sense of responsibility as captain, amid a fresh debate about the role overloading his responsibilities.

“It’s funny how a week can change everything,” he noted dryly. “It is tough. That is the toughest part as a captain, when you don’t perform, trying to lead because you are making mistakes but you have got to put it to the side and try and lead as best you can,” said Sexton, who admitted his inability to gather Ben Youngs’s wicked grubber for George Ford’s try affected him.

“Look, it’s a massive privilege to do the job, it’s not too much,” he maintained. “It wasn’t too much the first three times I did it. I just made mistakes. It happens and I’ll just try and bounce back. I’ve had a lot of performances like that when you have a long career as luckily as I have and, touch wood, I have a little bit longer to go.

“We’ve just got to take the character from it and draw some character out of trying to bounce back from it, and that’s what we’ll try and do. I’ll try and lead by example in that regard.”

Informed that Ronan O’Gara was one of those (along with Jonny Wilkinson) who ventured that the captaincy was too much for him, Sexton said good-naturedly: “I got some great advice recently. When you’re leading in an orchestra, you’ve got to turn your back on the audience. That’s something you’ve got to live by, and sometimes when things are going well you can fall into bad habits and have a little peek and see what’s going on in the audience.

“But,” added Sexton with a chuckle, “I thought Rog was coaching at La Rochelle. I don’t know why he’s talking about us.”