Japan still far away as Ireland focus on Scotland

‘There is so much rugby to be played between now and then,’ says prop Kilcoyne on RWC 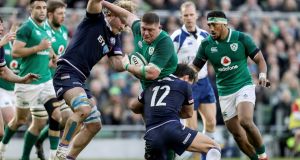 One of the issues that spooked Irish players this week was questions about the Rugby World Cup (RWC) later this year. Sensitivities sharpened after defeat to England. In their base at Carton House there was a sense the players trying to reboot a focus that may have crashed.

With Gregor Townsend plotting Ireland’s downfall, the last thing players appeared to want was to distort the clear sightlines of purpose and performance with RWC distractions. To that backdrop Scotland, Ireland’s neighbourly Pool rivals in Japan and the RWC-Six Nations axis was an area into which none of them wanted to delve.

“We haven’t talked about it at all,” said tighthead prop Tadhg Furlong about Japan.

“I don’t think it has been on anyone’s mind. The nature of it is that the preparation time is so condensed, all you can really focus on is what you do, what the team do and trying to get that cohesion.”

Now that wasn’t the answer to the question asked. But Furlong can be forgiven for sidestepping and being fearful of looking too far ahead. Past Six Nations meetings with teams Ireland have subsequently played in World Cups months later come with mixed results.

The only other time in the past Ireland played Scotland in the championship and again in the RWC the same year was in 1991. Scotland beat Ireland 28-25 in Murrayfield in the then Five Nations Championship at the beginning of the year and won again 24-15, when they met in Pool 2 of that year’s world event, again in Murrayfield.

“I don’t think any team in world rugby should be bringing bragging rights. . . it’s too fierce a competition, the Six Nations,” offered Munster prop Dave Kilcoyne. “There is so much rugby to be played between now and then.”

In the eight World Cups since the inaugural tournament in 1987, Ireland have met a team they had already played in the Six Nations earlier that year on nine occasions. Those meetings have been in both the pool stage and knockout phase of the competition, sometimes both.

A double In 1995, Ireland beat Wales by four points in the Five Nations and carried it over with 24-23 win in Pool C in Ellis Park. In 1999 Ireland did not play a Six Nations team in that year’s World Cup but in 2003 there were high hopes.

The Eddie O’Sullivan-coached side had beaten France 15-12 in Dublin. But the thin air of a World Cup quarter-final was too much and months later Ireland went down 43-21 in Melbourne.

In 2007 the French were again tormentors, this time Ireland’s ‘Golden Generation’ emerging from troubled Bordeaux to face the host nation only to be beaten 25-3. It proved to be a double for the French as the Six Nations meeting in Dublin had also fallen to France 17-20.

“We’ve always been week to week focused and the Six Nations is a whole different campaign and what you’re talking about is a wee while away,” said Irish scrum coach Greg Feek.

“Some people might say this is a good thing. It’s never a good thing for us to lose. Nobody likes losing and no one likes having tries scored against them either. There are aspects of what happened at the weekend where we need to take the binoculars away and just focus . . .”

In 2015 Ireland retained their Six Nations title from the previous year, the first time they had retained the title outright since 1949. Along that successful path, Italy were beaten 3-26 in Rome and again 16-9 in the Olympic Stadium in London.

France were also defeated in Dublin before Ireland went on the do the same again, winning 24-9 in the Millennium Stadium. In the Schmidt era, the team has carried on with the confidence to repeat Six Nations wins with subsequent World Cup wins.

Maybe too, more recent events under the current coach are more relevant than a few games against Scotland or Wales from the last century.

“Again, it’s all about now,” he repeated.

“You get a full pre-season before the World Cup, games leading up to it. And maybe the start thing is different to what it is in the Six Nations. There’s a lot of things that go on at this time of the year compared to the World Cup. You’ve just got to work with it.

“You’re never in control of a lot of these things either.”

The players were right to feel unnerved. There is no discernible pattern in what goes on in the Six Nations repeating itself some months later in the World Cup.

Prior to the competition beginning, Scotland coach Gregor Townsend had 19 injuries. This week he added hooker Fraser Brown and prop Murray McCallum to the squad as prop Willem Nel suffered a calf strain against Italy and Sam Skinner damaged his angle. Jonny Gray, Hamish Watson, John Barclay, Pete Horne and Sean Maitland have been injured. Some may be back this week.

It’s a changing landscape. The players are right to avert their eyes from Japan. But a win wouldn’t hurt.