Ireland’s Keith Earls dives to score a try despite tackles from Italy’s Tito Tebaldi and Alessandro Zanni during the Six Nations match at the Stadio Olimpico in Rome. Photograph: VIncenzo Pinto/AFP/Getty Images 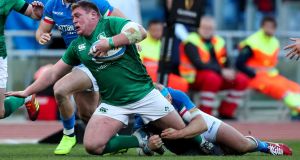 Ireland’s Tadhg Furlong is tackled by Leonardo Ghiraldini of Italy during the Six Nations match against Italy at the Stadio Olimpico in Rome. Photograph: Billy Stickland/Inpho

The sight of Johnny Sexton kicking a towel after leaving the fray in the 78th minute, not in anger at being replaced but rather in frustration with the overall performance rather summed up the prevailing mood.

Ireland won with a bonus point, recovering from a half-time deficit to win for the first time since the second Test in Argentina in 2014.

Having lost all 10 games in which they trailed at the mid-way point since then, the fact that they rolled up their sleeves and finally ended that sequence will be of some comfort. And all the more so given that they claimed the bonus point – something beyond Wales here a fortnight ago – even if Ireland had put a half-century on Italy in their previous four meetings.

Yet this was a curiously misfiring, scrappy performance, undermined by 15 handling errors on a dry, sunny day and five lost lineouts – three by Seán Cronin and two by Niall Scannell.

This could only partially be the product of four changes up front and a reshuffled backline following the early loss of Bundee Aki, the Connacht midfielder failing to return after going off for a Head Injury Assessment. Indeed, despite the five-point haul, this was in some ways the most mystifying Irish performance of the Six Nations to date.

Peter O’Mahony could be absolved, winning some vital turnovers, while Ultan Dillane put in a big shift, with 20 tackles. Jacob Stockdale was on fire, a danger whenever he touched the ball and conjuring breaks out of nothing, while Chris Farrell and Keith Earls adapted well to their enforced midfield partnership.

Handling errors by Conor Murray and Seán O’Brien set the tone for a sloppy first period, and were compounded by a mistimed lineout which saw Cronin overthrow to O’Mahony. When Cronin did connect after another long penalty to touch by Sexton, the maul eventually went to ground for another turnover.

Yet when Ireland finally put together a trademark passage of play, it reaped the game’s first try in the 11th minute. Aki made the initial inroads with a superb inside line onto Murray’s short pass from the tail of the lineout on halfway, and all the frontrowers were among the heavy carries.

Stockdale appeared on the right flank to make good yards too and Farrell was almost over from Murray’s skip pass flat to the gainline before Dillane and David Kilcoyne latched onto Quinn Roux for him to burrow through Federico Ruzza’s tackle to score his second Test try. Sexton converted.

That was, alas, Aki’s last contribution as Ireland’s midfield curse struck again, with Andrew Conway coming onto the wing and Earls and Farrell each moving a place inside. Conway almost scored immediately when beaten to the touchdown to Earls’s chip by Jayden Hayward, before O’Brien played the ball from an offside position after an Earls’s knock-on, albeit Tommaso Allan was wide from 43 metres.

After Stockdale prevented Tito Tebaldi from scoring, consolation came by way of an Allan penalty, but Dean Budd misread Sexton’s hanging restart, Michele Campagnaro knocked on the bouncing ball and Stockdale gathered to step away from Edoardo Padovani and fend off Maxime Mbanda and scamper away for his 14th Test try. Something of a Roman gift it was too.

However, when Sexton’s 22-metre restart went out on the full, it led to Cronin and Dillane being offside for Allan to trim the lead to 12-6. Rob Kearney stood his ground to block Tebaldi’s run after the scrumhalf tapped a penalty and chipped the Irish fullback.

However, another overthrow by Cronin led to Hayward stepping between Sexton and Earls, before then stepping Kearney and eventually being hauled down just short by the recovering Earls. But the damage was done, and Allan put Padovani over, albeit the pass clearly drifted forward, even if Wayne Barnes somehow didn’t even advise going to the TMO.

Worse still, after a strong Irish maul, Tebaldi came through the middle of the ruck to dispossess Murray and break to halfway before chipping ahead. Padovani clearly pushed Earls to the ground – again the nearby Barnes saw nothing – before regathering after the ball broke from Tebaldi and Kearney.

They went wide left, where O’Brien and Stockdale tackled Mbanda, before Morisi picked up and drove through Farrell’s tackle to give Italy a 16-12 lead at the break.

Ireland needed half-time, even if, inexplicably, Sexton’s second-half kick-off went out on the full, whereupon Kearney knocked on a high ball. This was not the leadership Ireland were looking for from two of their most experienced men.

But they regained the lead when Murray tapped a penalty and fed Kilcoyne, Ireland going through the phases before Earls’s feet left both Simone Ferrari and Tebaldi for dead as he scored his 29th Test try, thereby moving alongside Denis Hickie as Ireland’s joint third highest try scorer of all time.

Sexton converted, but Ireland squandered more chances. First Murray was again spoiled at the base of an attacking maul by David Sisi. Then Earls sliced through the Italian midfield from Farrell’s disguised short pass as Sexton wrapped around on a decoy loop and backed his pace before being hauled down by Padovani and Hayward, before Stockdale just slightly over-ran the popped offload.

Finally they translated their pressure into a bonus-point try in the 67th minute when going to the corner and rumbling toward the Italian line from an O’Mahony take. The maul having been brought down illegally, Murray backed himself to reach out for the line and did so, also knocking over a good conversion.

Ireland still required one good defensive set, Kearney’s strength in the tackle dislodging the ball from Ruzza, before Jack Carty was afforded his debut.

Ian McKinley missed a difficult penalty from the touchline in overtime as Italy sought a bonus point, whereupon Stockdale broke clear brilliantly from behind his own line to reach halfway but Earls failed to hold the pass infield before Carty knocked on.