Gatland questions England’s ability to win the games that matter 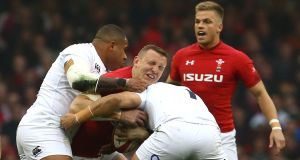 Wales boss Warren Gatland questioned England’s ability to win the games that matter after his team posted a stunning 21-13 victory over this season’s Six Nations title favourites in Cardiff.

It sent Wales top of the table in Gatland’s final Six Nations campaign at the helm, wrecked England’s Grand Slam hopes and left the hosts two wins away from achieving a third clean sweep since the 55-year-old took charge 11 years ago.

England led 10-3 at the break, but Wales fought back to claim a first Six Nations triumph against England since 2013 and record a 12th successive victory, breaking their record that had stood since 1910.

“England were outstanding in the first two games,” Gatland said. “I look back on England in the last few years. When it’s really mattered, I’ve questioned whether they can win these big games.

“We’ve had a record of being pretty good in them. We’re in a good position because you guys [media] were all talking England up, saying there was going to be 15 points in it.

“We knew exactly where we were, and I said to the players they [England] had no idea what animal was turning up this week, but we did.

“It was probably one of the best weeks that I’ve had with the team. I’ve been involved with a lot of teams, and yesterday’s captain’s run was as good as I’ve ever seen.”

“I thought he carried well, defended well, the set-piece was good,” Gatland added. “He’s a fantastic rugby player, but he does have a few demons to deal with.”

Eddie Jones responded to that statement by making an impassioned defence of the Harlequins prop, who made 18 tackles during the game.

“I didn’t know Warren had a degree in clinical psychology, so let me know and I might go and see him as well,” Jones said.

“We just felt it was the opportune time to make a change. Every time you make a change there’s a number of factors involved. He was starting to get a little bit tired.

“I know you guys want to single him out because Warren said what he said, but don’t be unfair to him. He’s a young player on the way up. Look after him a bit.”

After destructive wins against Ireland and France, England were brought down to earth in Cardiff.

“The world hasn’t ended. I guarantee you the world’s still out there and we’ll learn from this,” Jones said.

“It was a nip and tuck sort of a game, fine margins, you make one mistake it cost us a try that ultimately cost us the game.

“They beat us in the air, the penalty count was lopsided and when you are getting beaten in those two areas when it’s a tight game, you are going to struggle to get the result you want.

“Full credit to Wales, they played very well and deserved to win today.”

Courtney Lawes has a calf injury and faces a scan while Jonny May must undergo the return to play protocols for concussion.

Wales move on to Edinburgh for an appointment with Scotland in two weeks. Victory at Murrayfield and then against Ireland in Cardiff seven days later would secure a Grand Slam.

Gatland said: “We will enjoy tonight and then we will start thinking about Scotland and the challenge they pose. They have been making Murrayfield a bit of a fortress.

“We’ve got to make sure we are not complacent and that we don’t drop our level. There is a huge amount at stake.”