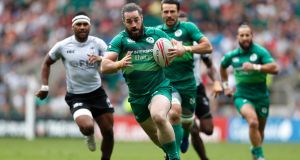 Ireland’s Mick McGrath on the way to scoring a try during the quarter-final match against Fiji at the HSBC London Sevens at Twickenham. Photograph: Luke Walker/Getty Images

Ireland showed that they will certainly add excitement to the World Series of the HSBC Sevens next season after losing out in a thrilling quarter-final of the London Sevens at Twickenham on Sunday.

Sevens powerhouse Fiji roared back with a devastating scoring blitz either side of half-time, with tries from Meli Derenalagi, Aminiasi Tuimaba, Jerry Tuwai and Vilimoni Botitu, all converted by Waisea Nacuqu, as they went 28-12 up after eight minutes.

Ireland regathered themselves and launched a daring comeback to get within in a score of their rivals, with tries from Buccaneers speedster Jordan Conroy and Lansdowne’s Ian Fitzpatrick, with skipper Billy Dardis converting the latter score, left Fiji leading 28-24 with two minutes to go.

Ireland’s hopes were dealt a blow when skipper Dardis was yellow carded for a deliberate knock-on and Fiji grabbed the final try of the encounter when Asaeli Tuivuaka flew down the right wing to seal his side’s semi-final slot.