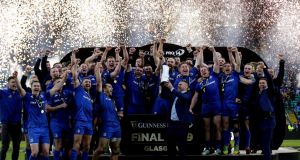 In the teeming rain and in front of a record final attendance of 47,128 , Leinster had to get down and dirty. That they did, with a gritty, sleeves-rolled-up performance; their muscular pack, game management, big-game experience and often huge defence eventually subduing a lively Glasgow to see them retain their Guinness Pro 14 title and so claim a sixth title.

The Warriors, chasing their second title, played the more enterprising, passing and running rugby, but as one suspected might be the case, Leinster adapted to the conditions better.

The scoring was bookended by fine Glasgow tries, but in between Leinster generally played for territory in classic cup final mode. They ought probably have opted to take a penalty from under the posts to make it 21-10 just past the hour, but ultimately had enough in the tank at the end of a long season and on the scoreboard to see them home.

Coming after the huge disappointment of the Champions Cup final, this win – a first in a final away from home – will have been all the more pleasing for the entire organisation.

The champions were far from their fluent best, and even Johnny Sexton had to overcome an edgy start in what was his record seventh final in this competition, but he duly did so and steered them home. Their superior discipline, winning the penalty count 7-4, was also significant.

Their scrum was a weapon, and Cian Healy augmented his work there with another huge shift around the pitch, even chipping in with a well-taken try. As usual, James Ryan, Scott Fardy and Josh van der Flier put in a huge amount of work on both sides of the ball, and Rhys Ruddock’s carrying and tackling were of a very high quality.

In tandem with Sexton, Luke McGrath managed the game and kicked very well, giving his bombs plenty of air time and helped by the chasing of James Lowe and Jordan Larmour, who also had some big moments defensively, this forced plenty of spillages.

Chants of “Glas-gow, Glas-gow,”, followed by ‘We are Warriors, we are Warriors”, echoed around the ground when the sides re-emerged for the kick-off to the backdrop of mostly sky blue home flags.

A high ball-in-play time was expected, and a lively opening passage of three unbroken minutes set the tone. The pre-match rain had relented, but the ball was still a greasy pill on the shortly cropped surface and, also setting the tone, Sexton kicked the ball out of hand more times (twice) in the first four minutes than he had in the Champions Cup final.

Fardy and McGrath also won loose scraps on the deck, and Nigel Owens, who was extending his own record in refereeing his sixth final, awarded the game’s first penalty against Jamie Bhatti for going off his feet. But Sexton, amid increasing whistles and boos, pushed the 40-metre penalty wide.

Instead, after Adam Hastings found a good touch, Jonny Gray superbly stole Seán Cronin’s throw and Glasgow powered through the 10 phases, inching closer to the Leinster line. Scott Cummings made a strong carry and off the quick recycle Matt Fagerson sniped, scrumhalf-style, through an unguarded inside of the ruck to score. Hastings converted.

Leinster responded swiftly. Larmour chased down Sexton’s restart and one recycle later McGrath was quick off the blocks to charge down Stuart Hogg’s clearance. As the ball slanted toward the corner of the six metre in-goal area, it came to a halt fortuitously like a spinning top just inside the dead-ball line, Ringrose led a posse of Leinster players to the touchdown. Sexton missed the touchline conversion, but more disconcertingly, somewhat miss-hit it too.

Glasgow’s back play was altogether more dangerous, and as so often happens when a ball goes to ground, Kyle Steyn slipped out of Ringrose’s tackle and then away from Henshaw. The try looked on, but Larmour tracked the ball as it was moved on via t Hogg to DTH van der Merwe, for Rob Kearney to make the tackle, with Larmour’s big hit also preventing the touchdown.

It was all hands on deck as Leinster withstood a barrage on their line, Sexton hauling down Hastings when he assuredly should have moved the ball on, and the Warriors had to contend with a three-pointer from Hastings against Fardy for offside.

Leinster’s response this time was even more emphatic. Following the departure of Fraser Brown, when Owens was quick to spot the Glasgow hooker had suffered a bad looking injury to his left knee at a ruck, Leinster went through 17 phases. Adapting to the greasy ball, it was mostly through runners off McGrath. Ruddock and Ringrose made good yardage, before Healy, with Fardy latching on, powered through Rob Harley’s tackle and one other in pumping his legs in his inimitable style for a fine finish.

Sexton landed the conversion, and despite more whistles and boos, tagged on a well struck scrum penalty from fully 45 metres.

Glasgow’s back play was still asking plenty of questions, and Jack Conan was alert to turn and gather Hogg’s chip to prevent the fullback re-gathering and were indebted to a Harley knock-on, before Leinster ended the half with another defensive set of near-on 20 phases before Hastings went for the jugular too soon with a long skip pass to Van der Merwe. Larmour tackled him into touch and Leinster took a little more psychological energy into the dressingroom.

The rain seemed heavier on the resumption, and after a long touchfinder by Hastings, Hogg opted to counter rather than use his searing right boot as he has in the early stages but was well tackled by Healy and Fardy. Cue a knock-on by Gray.

Leinster went through eight phases off the scrum before Henshaw opted to find touch. Henshaw and Sexton choke tackled Hastings, Henshaw ripping the ball from him, but Van der Flier knocked on in a big tackle by Gray.

A big moment came in the 49th minute at the end of another high-tempo, varied, multi-phase attack by Glasgow, which ended with Ali Price passing behind Cummings. Sexton reacted quickest with boot to ball, and Ringrose completed the gather to counter with Lowe, who was hauled down by Steyn. But the centre blatantly killed the ball by not releasing, and was binned.

Leinster went to their maul and one-off runners, and when Harley was again pinged for not releasing under the posts in the last act of an undistinguished performance, Leo Cullen signaled to make it a two-score game with the Sexton penalty rather than go for the jugular.

Their chance came when Sexton put a gorgeous little grubber in behind the Glasgow defence and Kearney cleverly allowed Price to gather short of the line before driving him over it with help from Fardy. Hogg wrestled the ball clear and passed to Callum Gibbins, but Ryan and Henshaw completed the tackle in the in-goal area to earn the five-metre scrum.

With a scrum penalty, despite Steyn returning, Leinster opted to pack down again. After a lengthy delay and a wheeled scrum, Owens opted for another one. Another went down, Glasgow seeming to buckle under pressure but, to another chorus of boos, it wasn’t conclusive, and when Leinster wend wide off the next scrum, three phases later McGrath fumbled at the base. After Ed Byrne replaced Healy, cue more cheers for a scrum penalty to Glasgow.

Whereupon the mood flipped entirely when Kearney chased his own up-and-under and collided with an airborne Hogg as he made the catch, forcing the Scottish fullback to fall very nastily side-on, but also on his head. While he had his eyes on the ball, given a duty of care, Kearney was yellow-carded which in truth was the minimum punishment he deserved. Hogg went off and didn’t return

Home crowd and team alike were energised, all the more so after a huge maul, before Henshaw and Ringrose combined to complete a turnover choke tackle on Steyn. Back came Glasgow after Leinster’s pick-and-go had run down some of the clock.

Glasgow set up a grandstand finish, Huw Jones making the biggest inroads before neat hands by Peter Horne and Matt Fagerson put Grant Stewart over in the corner.

However, Hastings was well off with the touchline conversion before Leinster pinned Glasgow inside their own 22 through a 19-phase defensive set which earned a scrum when George Horne knocked on at the base.

Leinster duly ran down the clock for Ross Byrne to kick the ball dead and punch the air. Suddenly we were reminded that Leinster had a sizeable contingent of supporters, and though their cheers were swiftly followed by yet more boos from the home crowd, soon the visiting players and fans had Paradise to themselves for the trophy and medal celebrations.

Diego Maradona dies aged 60; can Cavan’s kickouts do for the Dubs? 07:48
Joanne O’Riordan: Peamount show their pedigree as they prove themselves again 06:37
Fear won’t be a factor as Waterford get their licence to thrill 06:00
Limerick’s O’Donoghue wishes it was comrades all on the road to Croke Park 06:36
Sonia O’Sullivan: A lost season for Irish athletes in the springtime of youth 06:00
Here is your handy guide to sport on television this week