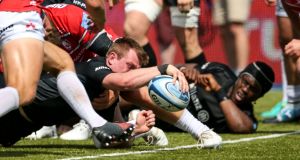 Six tries against the team that finished the regular season in third place kept the English champions on course for the double after they stormed Europe by dethroning Leinster a fortnight ago.

But – despite a 22-7 interval lead that was extended by Nick Tompkins’s third-quarter hat-trick – McCall was unsatisfied.

“I feel quite funny because the scoreline does them a disservice. We need to be better against whoever we play at Twickenham next weekend,” the director of rugby said.

“It’s almost perfect because we’ve won comfortably and scored some good tries, but still have a frustrated changing room.

“If we want to get the result we want, then we need to be better. The players understand that.

“Ten minutes before half-time and 10 minutes after, we took advantage of some crucial turnovers. Our ability to recover the ball from kicks was outstanding.

“But there were other parts of the game we too weren’t happy with. The first 30 minutes were okay, the last 30 minutes wasn’t good at all.

“We didn’t get past three phases in attack and we weren’t good enough at the breakdown, so there are enough things for us to fix.”

Tompkins came on in the 32nd minute after captain and centre Brad Barritt limped off with a hamstring injury that is almost certain to rule him out of Saracens’ fifth Premiership final appearance in six years.

“It’s devastating to lose Brad and it’s very unlikely he’ll be able to play in the final. Given what he’s given the team this year, that feels very sad,” McCall said.

“Nick has had a phenomenal game. He’s been involved in every Premiership and European game this season. He’s been one of the players who has risen this year.”

Saracens’ dominance prevented Danny Cipriani from pressing his England claim in front of Eddie Jones, but Gloucester head coach Johan Ackermann insisted the 2019 double award winner could still have a role to play at the World Cup.

“If we played better we probably could have helped him, but we made some silly defensive errors and couldn’t win the high contest and left some tries out there,” Ackermann said.

“It will be tough if he’s judged on the one game. You have to look at the whole season. He can make a difference. It’s the way you want to play and it is a tough choice for Eddie.

“I do believe that Danny can do it. Danny can come off the bench and make a huge difference.”