Ireland go with show of strength for Argentinian onslaught

Gerry Thornley and Gavin Cummiskey look ahead to Ireland v Argentina, where Jordan Larmour keeps his place after his hat-trick against Italy. Video: David Dunne 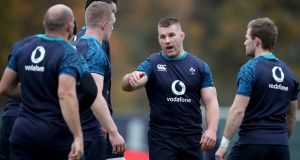 After the Chicago jaunt, different gravy all right. In renewing their rivalry at the Aviva Stadium on Saturday (kick-off 6.30pm), no less than Argentina, Joe Schmidt will send out his strongest side save for injuries. The spite may have eased, but this looks a spicy mix.

As well as being a hugely relevant match-up in its own right, as a precursor to Saturday week’s rendezvous with the almighty All Blacks, it could hardly be better. Only Conor Murray, Rob Kearney and now Garry Ringrose were ruled out, and all the indications are that the latter two, and Murray at a real push, will return next week.

Unless, of course, Jordan Larmour scores another hat-trick, the Bundee Aki-Robbie Henshaw combination tears it up (and they would provide the physicality required to face up to Sonny Bill Williams and Jack Goodhue) and Kieran Marmion keeps the machine chugging so seamlessly that it might ease any temptation to rush Murray back.

This starting Ireland team shows a dozen changes from Chicago, with only Larmour, Aki and Jacob Stockdale retained from the facile 54-7 win over Italy. Perhaps more relevantly, there are six changes from the starting line-up from the third test in Sydney last June, albeit five of these are injury-related.

In addition to Murray and Kearney being ruled out, Rory Best, Iain Henderson and Seán O’Brien (returning after a near 12-month absence) are all back. So too is Cian Healy.

It’s a strong bench too, so strong Tadhg Beirne doesn’t make the cut, with Devin Toner’s ball-winning ability retained. Rarely has an Ireland team/squad been tougher to crack. Andrew Conway’s inclusion means Will Addison, despite being asked to do media duties last Tuesday, also misses out altogether in what was, apparently, a late call on Thursday.

He played 50 against the Dragons last week and was sharp. The system comes first, and Marmion knows it well. Joe Schmidt doesn’t want fireworks from the Connacht man, just “to slot in really” and “not to try too hard, not to try to play too individually. Not that he would. The last time he came in at short notice he really did a super job for us. We know how good a defender he is. He is a little pocket rocket. So he’ll slot in, he’ll plug the front defensive line, he’ll work his way across the pitch looking to make sure that he’s got anything in behind covered as well.

“He will get good direction from Johnny [Sexton],” added Schmidt. “They know each other well enough. They’ve trained together Tuesday and Thursday. It has been a little bit of a truncated preparation but at the same time I think he’ll just slot in. So we just want that accuracy, that ability to make sure that we can get some tempo into our game.”

O’Brien missed out entirely on the Grand Slam as well as the tour to Australia last season, not to mention the Chicago win over the All Blacks two years ago. Schmidt believes O’Brien’s form is “still on that upward tangent”, adding: “That’s what I’m hoping because he’s a guy who in my experience of coaching him for 8½ years – or for intervals in that 8½ years – does take a couple of games to get up and running.

“But he’s up and running and so I’d be really hopeful that he’s going to take another step, and just watching him train, he’s bustling about the place. He just looks like he’s taking up a bit of space on the pitch and that’s exactly the sort of Seán O’Brien that you want to see.”

Schmidt is “not surprised” that O’Brien is back to near his best. “He’s a stubborn man and once he’s made his mind up about getting back to where he needs to be, he commits fully to things, and all I can say is we’re delighted to get him back on board.”

For O’Brien, representing Ireland was a primary driving force during his latest five-month absence. “It means everything. When the national anthem comes on, you think of all of those things – family, friends, people who’ve helped you in good times and bad times, all of the setbacks you’ve had and to get back again. I suppose there is a good bit of emotion tied to the whole thing.”

Noting that the changed quartet of loose forwards for this game are “looking over their shoulders”, that is what Schmidt wants. “I think anyone runs a little bit harder when they can hear the breathing of someone behind them.” Cue the selection “headaches” he wants. Hence, the coaches “hummed and hawed a lot” on Tuesday night, before reconvening on Thursday.

This is the first of four home games this season, with New Zealand, England and France to come.

“The players are incredibly excited about what’s coming up,” said Schmidt, but in the short term “they’re nervous about Argentina and how good they are. So there’s a bit of anxiety floating around which is not necessarily the worst thing.”