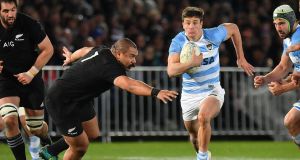 Argentina’s Bautista Delguy slips past New Zealand’s Karl Tu’nukuafe. He has the ability to glide along the top of the ground, effortlessly twisting and turning. Photograph: Marty Melville/AFP/Getty Images

Bautista Delguy is Argentina’s latest find. He only made his debut against Wales in June but after seven caps they are talking about him, even looking to him.

He is sleight and wiry and not tall. He looks fresh enough for First Communion. Clear skin, bright eyes, lightly tanned.

After a summer of rugby, he has become one of the faces of the Argentinean renaissance and one of their most outrageous attack runners, 10 tries in 15 Super Rugby matches with the Jaguares, one less than Australian fullback Israel Folau, one more than All Black winger Rieko Ioane. There he sits.

“First time in Ireland. First time on a November tour. Pleasure to be here. I am very happy. I want to play against Ireland,” he says eagerly.

At 21-years-old he bears a heavy load.

Ireland fullback Jordan Larmour has had to do it since he first began to step players at international level. Delguy knows Larmour and has played against Jacob Stockdale. He is a different shape to both, almost too lightly built for a modern player.

But even today on a saturated pitch, he glides along the top of the ground, effortlessly twisting and turning, sometimes turning his back to defenders and taking off in another direction.

Where Stockdale has power with speed and the smaller Larmour is elusive and powerful with quicker feet, Delguy looks almost frictionless.

In 100 metre running they said that the USA’s Olympic champion Carl Lewis ran on top of the track, his feet touching the surface only momentarily before lifting again. It wasn’t true but it looked that way.

In contrast, Britain’s Olympic gold medal winner Linford Christie used his huge upper torso to muscle and lever his way down the lane.

Delguy injured his shoulder to miss the last match in the Rugby Championship, a 34-45 defeat to Australia. To demonstrate he punches it with his right hand.

“Yeah okay,” he says. “I do not like this weather much. It is not like Argentina. We are trying to balance the game because of the climate. It does not help our game. And we know it will also rain in Japan.”

He then adds. “I am expecting a lot of high balls surely.”

Delguy understands, as Larmour and Andrew Conway and Keith Earls do, that when you don’t have the height of Stockdale, the opposition see it as an attack point. He expects balls to come out of the air at him, preordained by Joe Schmidt with mismatch attached.

“Stockdale and Larmour are my age. Kearney [not playing] is good in the air,” he says. “I played against Stockdale in Manchester in the semi-final. We lost. He is a very good player. Strong. We need to take care of him. He is very fast. Larmour was injured.”

Manchester was the 2016 U- 20 Rugby World Cup. Ireland lost in the final to England and Argentina beat South Africa for third place overall. On route to the final Ireland defeated the Pumitas 37-7.

Delguy is a winger and a fullback, he tells us. His greatest clips show him dropping a goal from the halfway line in a sevens match. All of the moments are offensive moments. He is always going forward except when he turns back to go forwards again.

“It is a very good team,” he says of Ireland. “They are two in the world ranking and we need to take care. This week is another type of rugby. In the Rugby Championship it is more dynamic. This type of rugby is very tough. There are no spaces.”