Liam Toland: We need Argentina and New Zealand to put us in a dark place 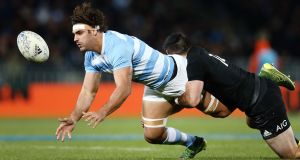 After 10 phases Emiliano Boffelli at fullback and Pablo Matera, above, at blindside wing forward and captain can be devastating. Photograph: Anthony Au-Yeung/Getty Images

When is conservative too conservative? The answer is almost irrelevant once your team dominate their team.

History tells us that Argentina have been able to dominate us in those crucial World Cup fixtures. Tomorrow will give us an insight, but that too is almost irrelevant as what got us to the World Cup does not get us to the semi-finals.

Does that mean we have to change? Absolutely not but the question is valid – can our style dominate their style? Consideration of where South Africa will be by RWC match 44, on October 19th is also crucial. Tomorrow brings challenges; the Rugby Championship statistics are an omen.

As noted last week the key for me this autumn is found in the words of four-star general Stanley McChrystal in Afghanistan: “If when you get on the ground the order we gave you is wrong, execute the order we should have given you”.

Can we see Ireland getting into a tough place the next two Saturdays and negotiating their way out of same?

If we see that, where for instance the All Blacks are ahead with 30 or 20 or 10 minutes to go and the Irish collective manage, in some way, to get their noses in front, then the autumn series is a marvellous success.

In a way, we need Argentina and New Zealand to put us into that dark place to make this November.

So, can Argentina put us into that dark place. To combat same what do we do?

Being capable is one thing but, as we’ve noticed with players like the rested Tadhg Beirne, the role of secondrow has evolved beyond what has been expected.

He is more than capable for the specific roles expected but the additions are what can bring Ireland into the semi-finals. This logic needs to be sprinkled throughout the rows. Cian Healy has it, ditto Tadhg Furlong, James Ryan, Iain Henderson and nearly all the hookers which leaves the Irish backrow to complete the capability.

The best backrow is certainly as selected; Peter O’Mahony, CJ Stander and Seán O’Brien. O’Brien is crucial because he contributes way beyond his specific roles. There is clearly a wash of quality beyond those three; but value added beyond capability is crucial.

So, tomorrow is a part dress rehearsal for New Zealand.

But with the RWC in mind and how Argentina exposed Ireland on the flanks in countering and counterattacking – can our starting back row achieve the following: As Argentine phase play gathers momentum have our backrow the ability to keep the phases to well below 10?

After 10 phases Emiliano Boffelli at fullback and Pablo Matera at blindside wing forward and captain are devastating. To nullify the aforementioned, and in preparation for the All Blacks, our secondrow and backrow must limit opposition phase play.

That’s to say can they make contact beyond the gainline? If not, can they chop tackle and jackal and steal the Argentine ball or earn a breakdown penalty? If not can they become such a nuisance that the Argentine recycle plods over five seconds affording the Irish midfield ample time to reset in defence?

Watch this process tomorrow, especially who is doing what role; if they can well then job done!

A nuisance factor is hard to quantify but Beirne, O’Brien and O’Mahony are brilliant in totally different ways. All three are brilliant on the deck and O’Mahony especially in the air. But don’t underestimate Devin Toner’s ability and size, not in the lineout, but around the fringe where he can provide sheer bulk in slowing everything down.

After all that defensive work – all three are brilliant working together, especially with tomorrow’s second row – how can the back row contribute to the overall attack?

What roles will they play therein? How narrow will Stander take the ball – 15m wide is best? O’Mahony is not an elusive ball carrier, like Matera scoring against Australia in Salta nor a destructive ball carrier like All Black Liam Squire so what can he provide?

(By the way Salta is a most amazing province to visit in Argentina – I’d highly recommend it!)

O’Brien is huge when Ireland are in possession as he is the one backrow who can do it all. Not the biggest but immensely important to the balance. In fact the balance of all five is hugely important; watch it!

Conversely Ireland will need to get beyond 10 phases to earn the gaps in the Argentine defence. But what type of phases?

So good is their match freshness and comfort in the subsequent breakdown ruck, we know that a Joe Schmidt side can batter ad nauseum one out from the scrum half.

But can this process make scoring easier or will a wider (ten/15 metres wider) approach reap more rewards whilst also limiting the monster mashups of the one out plays. Is that why secondrow Guido Petti is at seven for Argentina?

I expect a dominant Irish scrum with an Irish defensive system focused on making a total nuisance of Argentina’s recycle; if not Argentina will score.

A basic look at the stats in the hollowed SANZAR rugby championship show Argentina came joint first in rucks won, second in defenders beaten, second in metres carried, they beat Australia’s try scoring, and New Zealand’s discipline with no yellow cards. They won two games ; should have beaten Australia in Salta (31-7 up at half-time, 16 of whom are togging out tomorrow) and had very respectable performances against New Zealand. Game on!