Gerry Thornley and Liam Toland reflect on Ireland’s 26-14 win over France, which keeps Joe Schmidt’s side in the title race going into the final week of the 2019 Six Nations. Video: David Dunne 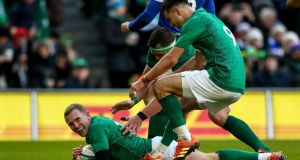 With France having found their mojo last time out against Scotland, Ireland put that result in perspective by also finding theirs with this utterly commanding bonus point win. It made for a satisfying Six Nations farewell at the Aviva Stadium for Joe Schmidt and Rory Best.

As expected, Ireland did to France what Leinster had done to Toulouse in the RDS last January, monopolising possession through the quality of their set-piece play, hard carrying, resourcing of the ruck and discipline, thus making France defend ad nauseum.

There was also more energy and line speed to their defensive work, such as it was, and in contact.

As ever, the ferocious work-rate of man-of-the-match James Ryan and CJ Stander set the benchmark, and the enforced introduction of Jack Conan only added to the carrying game. Cian Healy and Tadhg Furlong also generated the kind of go-forward momentum absent in the previous three games.

Behind them, Conor Murray was sharper in all he did and it was good to see hum clearly relish the physical stuff, while Johnny Sexton pulled the strings masterfully. There were some nice strike moves and clever variations in Ireland’s kicking game, with the classy Garry Ringrose and Jordan Larmour both finding space in behind. Keith Earls was, again, electric, and moved alongside Tommy Bowe as Ireland’s second leading try scorer of all time with his 30th Test try.

It says much about Ireland’s dominance that they will feel frustrated not to have been more clinical, and also to concede two late tries, which served to give the score-line a completely misleading perspective.

By contrast, Ireland’s flying start re-enforced the high cost of that first missed attacking lineout in Rome a fortnight ago. The opening try here emanated from their clever exit strategy from France’s kick-off. Murray passed behind the first pod of forwards to Sexton and Bundee Aki to shift the ball onto Ringrose. In delaying his kick, Ringrose further pulled the French backs forward, to find space in behind.

This in turn meant Larmour, called up in place of Rob Kearney due to a calf injury, had time to run back the return kick by Thomas Ramos and also find space in behind, forcing the retreating Damian Penaud to concede the lineout. The excellent Iain Henderson called the throw on himself, and Best broke off on the blind side of the drive to score. Sexton even landed the touchline conversion.

There was a scare for the home crowd and team alike when Romain Ntamack crosskicked off a scrum to Penaud. Larmour seemed to misjudge the flight of the ball as Penaud reclaimed it off the deck, passing inside for Ramos to round the posts, but he knew he had knocked it forward in the air.

Ireland ought really have put them to the sword even sooner than they did, Murray’s pass not giving Larmour sufficient time to put Jacob Stockdale over after big carries by the rumblers, notably one by Furlong. Healy nudged the ball forward rather than apply downward pressure when the ball was on the try line at a French ruck. Best also overthrew one close-range lineout to the tail.

However, a fourth penalty inside the French 22, and a second for hands in the ruck, forced Ben O’Keefe to issue Guilhem Guirado with a warning, to which the French captain offered: “Can we help?”

Ireland also lost the unlucky Josh van der Flier, meaning that with no specialist back-row on the bench Peter O’Mahony had to switch to openside. Not that it mattered.

After O’Mahony won a brilliant turnover at the breakdown, Ireland went to the corner again. From O’Mahony’s take and a well controlled maul, Murray passed in between the dummy runs of Stockdale and Aki to Sexton, who wrapped around Ringrose’s deft transfer and with Larmour’s decoy run also attracting Yoann Huget, who actually collided with Fickou. Sexton straightened and accelerated sharply through the gap inside an isolated Ramos and converted.

Ringrose almost scored a stunning try when chasing and claiming a Sexton bomb from Ramos, but lost control of the ball just short of the line as he slid in under the posts when tackled by Antoine Dupont.

But the pressure was relentless, and even when Ireland lost possession their more aggressive defence soon won it back. And when Henderson ripped the ball from Bamba, Ireland carried hard into contact and through the phases before Conan took Murray’s pass to plough into the tackles of Guirado and Dupont for Ireland’s third try.

Such was Ireland’s first-half supremacy that they made 89 carries to 15, forced France into making 136 tackles, while missing 12, compared to 26 for Ireland, with three missed. The penalty count was also 6-1, and perhaps most tellingly, the 19-year-old French outhalf Romain Ntamack only touched the ball four times in the entire half.

On the resumption, the rain fell and the French found some momentum. One penalty up the line and an attacking lineout even prompted the day’s first chants of ‘Allez les bleus”. Like the attack, it was soon snuffed out as Conan tackled Bamba and O’Mahony was unmovable in the jackal.

Ireland brought Earls in off his wing to chip into space, Stockdale and Ringrose overtook the retreating French backs as if the latter were being towed for Ringrose to tackle Dupont. Although they didn’t score off the ensuing scrum, from an ensuing lineout outside the 22, Stander peeled infield, drawing Bamba with him for Earls to accelerate through the ensuing gap and seal the bonus point try.

With that, and the six-day turnaround for the final day showdown at the Principality Stadium in mind, Schmidt turned to his bench and removed Best, Henderson, Murray and Sexton.

A poorly controlled scrum against a pack weakened by Dorian Aldegher’s yellow card, Guirado actually striking against the head, rather summed up Ireland’s inability to close out the game as they should have done. A nice move led to a brilliant break by Larmour but he stepped back into traffic and was finally gobbled up.

Instead Paul Willemse sliced through from Anthony Belleau’s pass to put Yoann Huget over and then O’Keefe dubiously awarded Camille Chat a maul try despite no clear grounding.