Lock was cited after incident in victory over Scotland in Nice 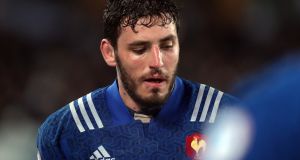 France lock Paul Gabrillagues has received a six-week ban after an incident in the win over Scotland in Nice. Photograph: Michael Bradley/AFP/Getty Images)

France lock Paul Gabrillagues has received a six-week ban after being cited for foul play during Les Bleus’ victory over Scotland in Nice last Saturday.

Gabrillagues was reported following alleged contact with the head of an opponent in a ruck or maul, and he appeared before an independent World Rugby disciplinary committee.

He is now set to miss the World Cup in Japan, which kicks off on September 20th.

World Rugby said: “Gabrillagues accepted that the alleged act did amount to foul play worthy of a red card.

“The disciplinary committee, having considered the evidence and the submissions, deemed that the foul play was intentional, the offence took place at considerable pace and with considerable force to the opposition’s head, such that the player sustained an injury.”

World Rugby added that a 10-week entry point in terms of punishment was reduced to six weeks following Gabrillagues’s “early acknowledgement of guilt, his apology and expression of remorse to his opponent and his good conduct at the hearing.”

Gabrillagues’s playing schedule means that his suspension will end at midnight on October 6th.