Eddie Jones and England have reasons to be quietly confident 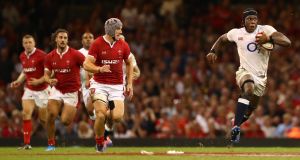 Maro Itoje breaks for England during their defeat to Wales in Cardiff. Photograph: Michael Steele/Getty

Two warm-up games down, two to go for England on the long, meandering road to Japan. If their two August warm-up games against Wales have reinforced anything, it is the folly of arriving at too many hard and fast conclusions a month before the World Cup kicks off. Which is fortunate for England: fail to improve on certain aspects of Saturday’s 13-6 defeat in Cardiff and they will fall well short in Japan.

In no particular order, they leaked a whole heap of penalties, lost the aerial battle and the breakdown, saw their driving maul neutered at a critical moment late on and generally lacked the snap and crackle they had displayed in the reverse fixture. So why did Eddie Jones look so content? Possibly because he now knows that, even when England are playing poorly with a weakened side in a hostile stadium, none of the world’s top teams can swat them easily aside.

Stop and consider the bigger picture for a moment. Against New Zealand last November England lost 16-15 but could easily have won. They had already beaten South Africa, albeit slightly fortuitously, the previous week and went on to lay waste to Australia, Ireland in Dublin and France. Yes, they have lost twice inside five months in Cardiff but the World Cup is taking place in Asia, not Tiger Bay. In Jones’s mind it is more about thinking smart, keeping a few tactical tricks up his sleeve and employing the correct tools from the red rose toolbox for the next assignment.

Even Wales rising to No 1 in the world rankings is not overly bad news. Many will put two and two together and immediately assume Warren Gatland’s side are favourites to win the World Cup. Talk about excess baggage. The more prosaic truth is that the margins are now so tight that any of the world’s top six or seven sides can currently beat each other, depending on the referee’s whim or the wicked bounce of a ball. Jones also knows England, more than most, still have plenty of improvement in them, not least in attack.

Which is why England’s failure to score a solitary try on Saturday and inability to score a single point in the first half of a Test match for the first time since their defeat by France in the quarter-final of the 2011 World Cup was not, ultimately, too heavy a punch to their solar plexus. Apart from anything else England have been dealt a useful hand in terms of how their pool fixtures pan out. The first two matches are against Tonga and the United States: Jones can virtually play two different XVs and still win, giving everyone some game time before the heavier duty contests with Argentina and France.

That, in turn, means he still has the remaining two warm-up games against Ireland and Italy – appropriately – to dot the i’s on his World Cup masterplan. Ireland, for that reason, can expect a very different England side, in terms of personnel and strategy, from the Cardiff version. “We’ll definitely have a different selection strategy and have a difference in the way we want to play,” said Jones. “We’ve deliberately tried to play through our set-piece in the last two weeks and play a power game. I wanted to test that out to see where we needed to improve.”

He even went as far as describing Cardiff as “the perfect World Cup prep game for us” in terms of giving less experienced players a taste of what awaits them and allowing some older hands a run near the end. It was an incomplete verdict, perhaps, but at least there is no disputing the form of the fit-again Anthony Watson, who again looked sharp enough to raise renewed questions over the identity of England’s best back three. Elliot Daly possesses enviable talent but he still does not look as supremely comfortable at fullback as he does elsewhere.

In that respect the injuries to Jack Nowell and Ruaridh McConnochie have complicated matters further, with Henry Slade also set to be unavailable again against Ireland. It will not have escaped Jones’s notice, either, that England’s Pool C opponents France took Scotland apart in Nice on Saturday evening; coping defensively in the wider channels will be vital against Argentina and Les Bleus.

In the meantime Jones is more concerned with negotiating all the pre-tournament white noise without his players relaxing their focus. Perhaps for that reason he declined to make a big deal about Ben Youngs not being ushered on to the field immediately when Willi Heinz was being taken away for a head injury assessment, prompting Wales’s Dan Biggar to take a quick tap which led to the game’s only try for George North. “It is what it is,” said Jones. “You’re not allowed to comment on referees. World Rugby are like Big Brother, they have facial recognition everywhere. You say one word and you’re in trouble.”

On the subject of the maul he also reckons it is preferable for England to keep their powder dry now and “add a few variations” when the time comes. That is fair enough if so but a second defeat at Twickenham on Saturday would definitely test Jones’s sangfroid. Stick 30 eye-catching points on Ireland, however, and no one will mention Cardiff again. - Guardian