All Blacks were on a highway to hell, but their World Cup outlook is now a whole lotta rosy 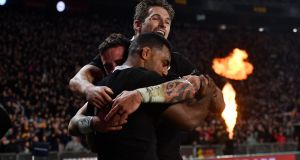 The Rugby Championship crown may have rested uneasily on their heads, but the Bledisloe Cup still sits snugly in place. Steve Hansen has always maintained that the two trophies that mattered most for the All Blacks in 2019 were the latter and the World Cup, and, while that may have been a self-serving way to give him and his squad some elbow room, the manner of last Saturday’s win over Australia is a timely boost for their World Cup aspirations.

In the aftermath of his 100th Test match as head coach of the All Blacks, Hansen admitted that their 36-0 win was “massive” in light of so many external voices questioning whether the players and the coaches still had what it takes. Following on from a slightly fortuitous win over the Pumas in Buenos Aires, a draw at home to South Africa and a 47-26 drubbing by the Wallabies in Perth, this was a badly needed, mentally restorative win.

Of course, the All Blacks were always likely to win the return meeting at their Eden Park fortress, where they haven’t lost in 42 matches dating back to July 1994, and where Australia have lost 18 Tests in a row going back to 1986.

This was history repeating itself because, four years ago, the All Blacks responded to a 27-19 defeat by the Wallabies in Sydney by beating them 41-13 a week later in Eden Park.

Such turnarounds, of 36 then and 57 points last week, are not unusual in the back-to-back pool rounds of the Heineken Champions Cup. Probably the worst time to face opponents you’ve just beaten is a week later or, as Ireland discovered in November 2015 at the Aviva Stadium, two weeks after winning in Chicago.

The main difference in Eden Park compared to a week earlier in Perth was how the All Blacks ramped up their physicality in the tackle area, at the breakdown and at scrum time.

Hansen and co had made the difficult decision to drop Owen Franks, the 31-year-old, 108-times capped tight-head rock in their 2011 and 2015 World Cup triumphs. The promoted Nepo Laulala helped to utterly transform the All Blacks’ scrum, which even shunted the Wallabies back with seven men, as well as adding dynamism around the park.

In the absence of the injured Brodie Retallick and the suspended Scott Barrett, Patrick Tuipulotu’s eye-catching performance underlined the All Blacks’ second-row depth. Hansen and co stuck to their guns in keeping with Ardie Savea in a back-row that was also revitalised, and Savea’s barnstorming carries laid down a marker.

The All Blacks’ coaches weren’t for turning back either on again employing Beauden Barrett at fullback and Richie Mo’unga at outhalf as dual playmakers. There were signs of this working even in Perth, when Barrett’s counter-attacking off turnover ball yielded one try, and the two combined for his own try. And that was off scraps. Working off much more possession and go-forward ball at Eden Park, they excelled individually and in tandem.

With Jack Goodhue injured, they were obliged to reshuffle their midfield, and Sonny Bill Williams assuredly nailed down his World Cup place. Shifting to outside centre, Anton Lienert-Brown was outstanding, effectively creating three tries and scoring one.

Two more optional changes on the wing were also rewarded – and how. Here, another World Cup-winning veteran, 33-year-old Ben Smith, was dropped, as was Rieko Ioane (23 tries in 26 Tests) to be replaced by Sevu Reece and George Bridge, who’d played four Tests between them.

Each scored and each was sensational, Bridge in the sharpness and intelligence of his play, and the electric Reece in his dynamic work-rate and constant threat. His lack of experience could even be a blessing, for he clearly injects energy, not unlike Jofra Archer has done with the English cricket team.

So this is different from eight years ago or four years ago, and confirms that these All Blacks needed revamping. When the All Blacks lost a thrilling Tri Nations decider against Australia in 2011, all but four of the side were part of their 20-6 win over the same opponents in the World Cup semi-final two months later, and one of those was due to losing Dan Carter through injury.

When the All Blacks avenged their loss to Australia within a week at Eden Park four years ago, they retained a dozen of their starting XV. Two months on, there were only two changes for the ensuing World Cup semi-final win over Australia, and all but one of that side pitched up for the final.

“Where we had question marks, we no longer have question marks,” said Hansen on Saturday, although their choice at tighthead, second-row and the wings remains open to speculation.

Indeed, despite last Saturday’s return to form, it was in part inspired by a relatively significant overhaul in playing personnel. As a consequence, the All Blacks still look less settled than four years ago.

They cannot back themselves into quite the same corner again, nor find the same vengeful motives or indeed transplant Eden Park to Tokyo, and they’re not quite as imposing as four years ago. In this World Cup cycle they have still lost six games compared to three between 2011 and 2015.

Hence, they will assuredly kick off the World Cup as they’ve done pretty much every one of the preceding eight, ie as favourites. They could well win the William Webb Ellis Trophy for a third time in succession, too. But they also still look more vulnerable than four years ago.

It seemed utterly bizarre that on the day that the All Blacks beat Australia 36-0 to retain the Bledisloe Cup, they were removed from the top of the world rankings by Wales’s 13-6 win over England. Go figure. Brilliant achievement by the Welsh it may be, but it won’t bother the All Blacks one iota.

Darcy Graham ruled out of Scotland’s clash with Ireland 17:44
Magic Wand bids to go one better in $1m Pegasus World Cup in Florida 17:41
Ben Stokes involved in verbal altercation with fan in Johannesburg 17:38
Contrasting reactions from Wozniacki and Williams to Melbourne exits 17:22
Matt Williams: Expect the unexpected in rugby’s greatest tournament 16:00
Here is your handy guide to sport on television this week