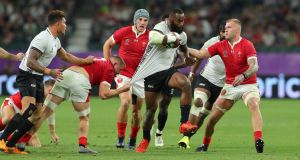 Fiji’s Semi Radradra is at the top of his extraordinary powers with Bristol. Photograph: Koki Nagahama/Getty Images

Although it’s still a long shot, hopes of a vaccine being made available in early 2021 may well encourage the Six Nations to further explore the possibility of delaying next year’s tournament. The difference between empty and full stadia for the 15 matches would be worth well in excess of €100 million for the six unions and federations.

For the time being, in the absence of the customary November visits of the heavyweight southern hemisphere countries, they will have to made do with the hybrid Autumn Nations Cup, with the six supplemented by the presence of Georgia and Fiji.

While the threat of the virus hangs over the competition, credit to all involved for making this happen. It could, conceivably, one day lead to an annual end-of-year tournament with a more global hue. The advent of Amazon Prime as the chief broadcaster in the UK could also heighten competition for Six Nations TV rights from 2022 onwards, with a seemingly inevitable shift to some form of pay-per-view.

Ireland’s planned November Series, which was due to feature games against Australia, world champions South Africa and Japan, might have yielded in the region of €7 million. In its stead, their upcoming four games (three at an empty Aviva) might generate circa €1.5m while also delivering value to long suffering sponsors.

The draw, more an arrangement to avoid repeats of recent games or 2021 Six Nations fixtures, divided the eight countries into two groups with final rankings to determine the last round of play-off matches.

It certainly looks imbalanced with England, Ireland and Wales, who between them have won the last 11 Six Nations, drawn in Group A, whereas the Scotland-France game should decide Group B.

Having regained the Six Nations’ title for the first time since 2017, beating group rivals Wales and Ireland along the way, England go into this tournament as warm favourites to win a second trophy in quick succession. With their strength in depth, they could probably pick three teams, so Eddie Jones can aim to maintain a winning mentality while adding to squad depth. Worcester’s Ollie Lawrence looks the part, and can fill the hard-carrying role created by Manu Tuilagi’s latest injury while also providing more of an offloading and long passing game, and the Gloucester winger Ollie Thorley could add to the X-factor out wide.

The Lelos have been clamouring for entry into the Six Nations for years but their 48-7 defeat by Scotland last month was the only game their home grown players have had since March and it showed, as the Scottish pack scored three of eight tries off their maul. Even some of their customary Top 14 frontrowers, Montpellier prop Mikheil Nariashvili, Toulouse hooker Jaba Bregvadze and La Rochelle prop Lekso Kaulashvilli haven’t been getting much game time. It could be a trying time for the promising Brive half-backs Vasil Lobzhanidze (24) and Tedo Abzhandadze (21), as well as the 20-year-old winger Demur Tapladze.

The Six Nations wounds still fester but this is an opportune chance to revive spirits as well as building strength in depth which, as Pro14 form underlines, is still superior to their Celtic rivals and Italy. James Lowe’s enthusiasm and X-factor looks particularly timely, and likewise promotion for a crop of hungry players for the opening game against Wales. The defining game, psychologically, is Twickenham, given recent damage at the hands of England and Saracens. A seriously competitive performance next week amid three wins would make for a good month. Scrum and defence are concerns but there’s rich attacking potential. Ireland could be entertaining.

Ala any long and successful coaching reign, witness Ferguson, Wenger, Noves et al, what follows is often challenging and so it’s looking post-Gatland for Wales, especially after the highs of 2019. In contrast to the latter’s fierce loyalty to his assistants, after five successive defeats Wayne Pivac has removed defence coach Byron Hayward. Pivac’s methods took time at the Scarlets but key, venerable players look rusty and are lacking form. They also lack ball-carrying oomph. This has uncanny echoes of the 2005 Slam fall-out, for no-one does highs to implosions quite like the Welsh. Then again, Pivac has retained faith in a wounded team.

Newly installed head coach Vern Cotter has assembled a 32-man squad containing nine home grown players and a clutch of familiar names, including Semi Radradra, aka Semi Trailer, who is at the top of his extraordinary powers with Bristol, the Leicester powerhouse Nemani Nadalo, who has come out of retirement and Glasgow lock Leone Nakarawa. But the absence of Semi Kunatani, Clermont backrower Peceli Yato and Viliame Mata will diminish their power up front. Furthermore Fiji haven’t played a game in a year and their preparations have been hampered by an outbreak of Covid-19 in their squad, forcing the cancellation of a warm-up against Portugal. Fiji will be entertaining.

Under Fabien Galthié, les bleus have been re-born, demonstrating the benefits, at last, of a proper coaching set-up, a settled team and a blend of forward power allied to X-factor aplenty in the shape of Antoine Dupont, Romain Ntamack and Virimi Vakatawa. They come into this tournament after France’s best Six Nations in a decade but the latter trio and other key men such as captain Charles Ollivon are only permitted to play one more match this autumn due to an agreement with the clubs. Hence, Galthié will have to break up that side, although their group looks sure to be decided by their meeting with Scotland in Murrayfield.

After their 27th Six Nations loss in a row, the Azzurri start off in Florence on Saturday seeking to end a run of eight successive defeats by Scotland. Their depth is actually improving. Gloucester’s rampaging Jake Polledri has filled the void left by Sergio Parisse, which says it all really, and 20-year-old outhalf Paolo Garbisi looks a proper prospect, if raw. Yet despite a second playmaker in Carlo Canna they drew two blanks before lockdown and two of their three tries subsequently were from intercepts. Fiji is a must-win for morale to avoid a seventh place play-off against Georgia.

Scotland emerged from that grim arm wrestle against Wales, when the impact of their bench underlined their improved strength in depth, having won three Six Nations games in a row for the first time. Gregor Townsend’s side have also been handed a favourable draw, with what may be an experimental France coming to Murrayfield (where their Slam ambitions were derailed in round 3 last February) either side of eminently winnable games against Italy and Fiji. Alas Finn Russell and Adam Hastings have been ruled out, with Duncan Weir renewing an international career which has been in cold storage since March 2016.