Rugby World Cup: England on the verge of greatest triumph 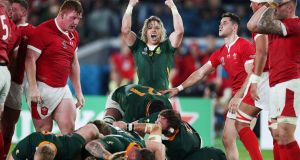 Fittingly perhaps, England will be faced by South Africa in next Saturday’s World Cup final, in a reprise of the 2007 decider. But while the Springboks were hot favourites to overcome Wales in Sunday’s second semi-final, they were pushed all the way before pulling through with a 76th-minute penalty by Handré Pollard as a raft of late decisions went their way.

As the last three penalties of the game went decisively against the Welsh, there was also a moment shortly after Pollard’s final penalty when the ball hit the Boks’ winger S’busiso Nkosi on the leg while his foot was in touch, but the touch judge and TMO missed it.

The net effect means that England can complete perhaps the greatest World Cup triumph of them all should they beat South Africa next Saturday, for they have reached the decider by beating Argentina, Australia and, most spectacularly of all, the back-to-back champions New Zealand on Saturday.

The final leg of this all-conquering quartet of wins against the southern hemisphere big four is against the recently crowned champions of the Rugby Championship. There could be no disputing their status as world champions if they completed that unprecedented quadruple.

Rassie Erasmus’s feat in taking a South African team beaten 38-3 by Ireland two years ago and by Italy a year before to a World Cup final in just 25 matches in charge is exceptional, but their performance in eventually wearing down Wales with their power and kicking games was unapologetically grim.

The 67,750 crowd were becalmed almost from the start as, all too predictably, the teams combined to kick ball in open play an astonishing 81 times. And kick it badly at that.

But Erasmus was chuffed to hear that Gatland said the Boks “have the physicality to match England” in the final.

“I think he’s right, there are definitely some areas in our game which must improve but we’ve given ourselves a chance. We’ve played England four times in the last 18 months and it’s 2-2, so we’re accustomed with the way they play.

“They’re obviously much better than the last time we played them, you could see that last night with the way they dismantled New Zealand. We think we’re in with a chance. We’ve got a six-day turnaround.

“I’m not 100 per cent sure if a World Cup final is going to be won by a very expansive game plan with wonderful tries. It might be, I might be wrong. But I think we will go and grind it out.”

Siya Kolisi, the Springboks’ captain, gave an inkling as to the influence of Erasmus, who first gave him a contract when he was 18, and the importance of this achievement.

“As soon as he came, he made it very clear that the Springboks is the most important thing, whereas in the past most of us tried to build ourselves on social media and those kind of things.

“He brought us back down to earth and told us we had to play well first and everything else will come. It’s awesome to come together and it means so much to us.”

Recalling where he watched the 2007 final, Kolisi said: “I was actually watching it in the tavern because I didn’t have a TV at home. I remember what it did for us in 2007 – I’ve never seen people come together like that over sport.”

Meanwhile, Gatland’s durable 12-year reign has witnessed one-point and three-point World Cup semi-final defeats either side of a 23-19 loss to the Boks in the quarters four years ago. But he wore it well.

“It was a tough encounter. We knew it was going to be an arm wrestle and we stayed in that arm wrestle. I thought there was a momentum shift until the last four or five minutes and we started to get going, but unfortunately we were penalised and the game got away from us. I am not taking away from South Africa and I thought they played really well.

“We are very disappointed but I am incredibly proud of what we have achieved in this World Cup and what this group of players have done. We can hold our heads held high and leave Japan with a lot of respect. We have another game to play the All Blacks. The dream was that my first game in charge of Wales was against England and the last to be against them as well. But it was not to be.”

As for England’s chances, the Kiwi believes Eddie Jones’s side may have peaked during their 19-7 win over New Zealand.

“We have seen in previous World Cups that teams sometimes play their final in semi-finals and don’t always turn up for a final.”

So it is that Gatland’s 12-year reign and Steve Hansen’s eight-year reign as the All Blacks’ head coach (and that was after four years as an assistant) will come to an end next Friday in the so-called Bronze Medal Final.

With George North and prop Tomas Francis adding to their casualty list, Gatland and his management team will need to assess their options quickly over the next day or two before a game he described as “hugely monumental”.

Gatland was more philosophical about Wales’s semi-final exit than Hansen, who had to fight away the tears

“As a coach, apart from being with the Lions, it’s the team I haven’t beat with Wales. It would be nice to be able to achieve that and then I’ve got some excitement ahead about the challenges going back to New Zealand with the Chiefs and then back to the Lions in 12 months or so, and then try to have some revenge on tonight’s game against South Africa. Maybe in a couple of years against the Lions we’ll be able to do that.”

Gatland was more philosophical about Wales’s semi-final exit than Hansen, who had to fight away the tears after facing the media on Sunday morning. After admitting that he had phoned his wife as well as Graham “Ted” Henry and Conrad Hansen, he had to pause for a drink of water.

“I talked to Ted and Conrad about ’07 and we mentioned the fact it’s no different, the same gutting feeling. Then Ted and I talked about how well George Ford had played. Ted had quite a few comments and I did a bit of listening, trying to do a bit of learning, and then you just move on, don’t you?

“We’re still hurting, as you’d expect. I’m sure the whole country is hurting. You come to a tournament like this and you want to win the thing. We played some good footy on the way and unfortunately last night we got beaten by a team that was better than us.”