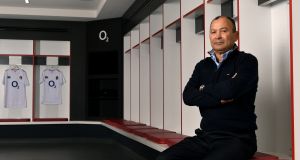 Eddie Jones: “To beat Ireland, we need to compete brutally in all the contest areas of the game.” Photograph: Dan Mullan/Getty Images

Owen Farrell will captain England in their opening Six Nations match against Ireland at the Aviva Stadium on Saturday, February, 2nd, following confirmation his squad co-captain Dylan Hartley has been ruled out with a knee problem.

Joe Launchbury (Wasps), the Vunipola brothers, Mako and Billy and the Leicester Tigers firebrand prop Ellis Genge return to the national squad following injury, having last played for England during the 2018 summer Test series against the Springboks in South Africa.

Harlequins’ backrow Jack Clifford and Exeter Chiefs centre Ollie Devoto are recalled to the squad having not played for England since 2017 and 2016 respectively.

Hartley is joined on the injured list by former England captain Chris Robshaw, Piers Francis and the Bath trio of Jonathan Joseph, Sam Underhill and Anthony Watson. There is no place for Harlequins scrumhalf Danny Care or Saracens fullback Alex Goode.

Despite presiding over an England side that lost six of 12 Test matches in 2018, Jones has lost none of his traditional bullishness or capacity for a salacious sound bite or three.

A modest playing record in a year in which England lost to Scotland, France, Ireland, South Africa (twice) and New Zealand hasn’t dented his confidence.

Perhaps the most Churchillian clarion call saw him proclaim: “I don’t expect them [the England players] to beat Ireland; I prepare them to beat Ireland.”

The mantra was reinforced in response to a variety of questions, the message clear.

Jones said: “It’s just how we want to beat Ireland. This isn’t a Six Nations squad; this is a squad to beat Ireland. We’re in a good position (in terms of injuries relatively speaking) and it’s a World Cup year, that’s always in the back of your mind but we’re focussed on beating Ireland and we’re determined to beat Ireland.”

He was also complimentary about Joe Schmidt’s Ireland side.

“To beat the best team in the world, which is Ireland, we need players chomping at the bit. They are a very well coached and drilled side and have particular things they do well in the game. To beat Ireland, we need to compete brutally in all the contest areas of the game,” said Jones before adding, “they [Ireland] play very methodical rugby.”

Jones addressed the issue of his missing co-captain, Hartley and a decision to omit Danny Care.

“We’ve taken the completely different approach to camp this time. We’re specifically focusing on the Ireland game, so we’re only looking at players for the Ireland game.

“Dylan won’t be available for the Ireland game, maybe for Wales. Same with [Chris] Robshaw, we’re not taking him for the same reasons to let him rehab properly. He could be earlier though.”

Jones acknowledged Care’s good form but said: “we always wanted to take a look at Dan Robson. We wanted to in November but unfortunately he got injured”.

The 26-year-old Robson moved to Wasps in 2015 from Gloucester and has supplanted Joe Simpson as first-choice scrumhalf at the club. Gloucester wing Thorley and Worcester Warriors hooker Jack Singleton were members of the England team that beat Ireland in the final of the Under-20 World Junior Championship in 2016.

The 22-year-old Thorley is a strong, quick wing and showed glimpses of that ability against Munster in the Champions Cup match last weekend – he won the English Premiership player of the month title in December – while Singleton played for England in a non-cap match against the Barbarians at Twickenham during the summer.

Ben Earl (21) scored two tries for Saracens in a five-minute cameo in a Champions Cup match against Cardiff Blues and the former underage Grand Slam winner toured with England in South Africa last summer. A fine athlete, he started as a centre, plays number eight but his preference is for the role as openside flanker.

The return of Joe Launchbury restores an excellent athlete with huge experience to a squad that contains depth of quality in most positions, while Billy Vunipola’s muscular carrying has been missed. There is still a feeling that Jones hasn’t discovered what his best midfield axis is, the 10-12-13 combination, with the same faces reappearing.

There is plenty of mobility and power up front, Mako Vunipola, Ellis Genge and Kyle Sinkler are the prototype modern props, plenty to choose from in the secondrow and perhaps if there is one other area in the team that might require time, it is getting a complementary balance of skills in the backrow.

England fly to Portugal next Wednesday for a warm weather training camp before the squad is reduced to 25 players ahead of the trip to Dublin.

Jones admitted: “The first thing when we get together as a squad is to get our cohesion back. The players have been playing for their clubs with different styles and different playing philosophies, so it’s about getting them thinking about playing the England way.

“The second thing is to get our togetherness stronger, to work as hard as we can to make sure we are well connected on and off the field. So Portugal is an important camp for us.”

The 38-man Ireland squad will also be in Portugal next week, flying out on Monday and returning on Friday.