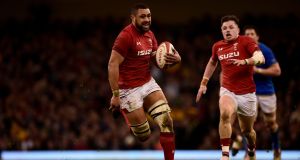 Wales look to be without Taulupe Faletau for the upcoming Six Nations. Photograph: Reuters

Faletau, a British and Irish Lion, suffered a fractured forearm playing for Bath in October and missed the autumn international series.

The 28-year-old returned for his club in Saturday’s 18-16 Champions Cup win over Wasps, and the club confirmed on Tuesday that he has suffered another break.

Faletau is expected to be out for up to eight weeks, with the final round of Six Nations fixtures coming on March 16th.

Wales begin their campaign away to France on February 1st and coach Warren Gatland is due to announce his squad at midday on Tuesday.

Speaking after his side’s game on Saturday, Bath director of rugby Todd Blackadder had been full of praise for Faletau.

“He looked great, didn’t he? Really sharp. If only we could have given him more ball,” Blackadder said.

“I have to give a big pat on the back to our strength and conditioning staff, for the work they do behind the scenes in getting the guys ready.

“Before the game, he (Faletau) was really, really nervous. But it’s good to see those nerves from an experienced guy like him.”

Gatland has several other injury concerns, with Leigh Halfpenny set to miss the start of the tournament as he has not played since suffering concussion during the victory over Australia on November 10th.

Scarlets head coach Wayne Pivac said last week that Halfpenny has seen a specialist and would not feature for “three to five weeks”.

The outhalf limped off with what Saints director of rugby Chris Boyd described as a “minor knee twist”, although Biggar is expected to be fit for Wales’ curtain-raiser.

Ospreys lock Adam Beard suffered a neck injury over the festive period but should be fit to resume his second-row partnership with skipper Alun Wyn Jones.

Dragons back-rower Ross Moriarty has also been sidelined since suffering concussion last month, but has been pencilled in to return in the Pro14 clash against Munster on January 26th.

Ospreys centre Scott Williams and Blues flanker Josh Navidi are expected to return after missing the autumn with respective hamstring and knee injuries.

But Scarlets flanker Aaron Shingler (knee) remains out and Blues captain Ellis Jenkins is another absentee as he continues his recovery from ACL surgery.

1 Gerry Thornley: Home and away Six Nations could be its ruination
2 Liverpool among clubs to argue against paying €384m TV rebate
3 Gerry Thornley on pitfalls of a home and away Six Nations; Premier League return edges closer
4 Rory McIlroy now realising the power his words carry as world’s number one
5 Arsenal kit still on sale in China despite Ozil’s Uighur comments
Real news has value SUBSCRIBE