David Wallace: Munster have the firepower to scale Europe again 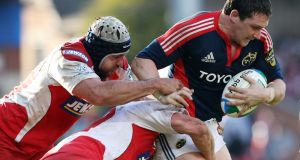 David Wallace in action for Munster against Gloucester in the Heineken Cup quarter-final in April 2008. Photograph: Billy Stickland/Inpho

David Wallace was an ever-present in Munster’s 2005-06 and 2007-08 Heineken Cup-winning campaigns, since when they have failed to lift the trophy despite reaching six semi-finals.

They’ve been backed into a corner again on Friday night, but their former flanker believes this team can not only swim to shore but, more so than in recent times, actually have the ability to emulate the class of ’06 and ’08.

“Yeah, I think so. It will be difficult, of course. There’s a lot of talented teams out there. With the re-emergence of Toulouse it will be interesting to see how they go against Leinster.”

But, citing the confidence generated by the first performance against Leinster at the Aviva, and the recent win at Thomond Park, Wallace adds: “You look at the firepower we have, there are six or seven match-winners in that team, Conor Murray, Joey Carbery, CJ Stander, Peter O’Mahony, Andrew Conway, Keith Earls, Chris Farrell. ”

“There are some real X factor players in that team. There are areas that still need improving but there’s certainly the firepower to win it, and I think that should be our goal.

“The strength in depth is not quite on a par with Leinster but I would argue that we would have more X factor players in our first XV.

“Health and fitness are going to be a big part of that, but I think we have the ability to beat anyone, whereas maybe in the last few years I might have said the likes of Leinster and Saracens were a little bit beyond us. But I think we’ve caught up with the signings of Carbery, Beirne and Farrell.”

Wallace has been co-opted onto Virgin Media TV’s Six Nations coverage, where he will be pitchside and doing highlights packages. He has stayed in the punditry game by working sporadically with beIN Sport in Qatar.

“It gets picked up in Australia and places like that, and we meet in the Middle East or southern Europe or Africa. Just dipping my toe.”

Munster have history with Gloucester although, due to shoulder surgery, Wallace missed the 2002-03 campaign and the Miracle Match, which was actually his first punditry gig.

“I did the TV analysis with George Hook, ” recalls Wallace. “It was epic to witness it. The odds were stacked against Munster but, as we know now, Munster love it that way.

“Different incidents stand out for me, like John Kelly blitzing a ruck at one stage. A phenomenal day, just one of those you’d love to have been a part of, but lucky to be there, even as an onlooker.”

Miracle status might have applied to Munster’s last-round heroics in 2005-06 too. Going into a pool showdown at Thomond Park, Munster had to bag a five-point haul and restrict Sale to none in order to finish first and earn a home quarter-final.

They had three tries by the half-hour mark through Anthony Foley, Iain Dowling and Barry Murphy’s wondrous solo effort, but entering injury time they were still one shy. Attacking wide left off a scrum through Shaun Payne’s strong carry, Wallace picked up ruck ball five metres out and dived over.

“Not one of my most picturesque tries but certainly one of the most important tries I scored in my career. It was another of those great days and I just happened to be in the right place at the right time and it opened up for me,” he says, laughing. “I think the only person I had to hand off was the referee.”

A Lansdowne Road quarter-final against Perpignan was a nice earner too, but no bonus for Wallace. “A moral bonus,” he says. “It was nice to know you were adding to the coffers, and great for our fans. The match was won by so many others, but certainly one of my favourite tries.”

Munster went on to beat Leinster in the semi-final and then Biarritz to finally reach their Holy Grail. “It was a long time coming. The feeling was, ‘if we don’t do it now, when are we going to do it?’

“It was an emotional team as well. Conrad O’Sullivan passed away and a lot of guys would have played with him at under-age. We wore black armbands against Perpignan, and were playing for him too.

“There was a lot resting on that season, Deccie [Kidney] was in his first year back. The quarter-final against Perpignan was an arm wrestle and there was so much pressure in the weeks before the Leinster semi-final. After that I wouldn’t say Biarritz was easy, but by then we were certainly conditioned to the pressure.

“The supporters were a massive part of it, not letting them down. We couldn’t come home without it.”

Wallace was part of the team which beat Gloucester 16-3 in the 2007-08 quarter-final in Kingsholm en route to their second Cup. Chris Paterson initially missed an array of penalties before Doug Howlett scored the game’s only try from a grubber by Denis Hurley.

“Dougie showed incredible pace to get to that ball. It was one of those ones when you thought, ‘that’s why we signed him.’ It’s a tough place to go. You have to be at your best to win over there,” says Wallace, noting how Gloucester fronted up with 14 men at Thomond Park, and showed steely determination at Kingsholm.

“But it’s great news that Chris Farrell is fit to play. If Munster are to have a big year he’ll be a part of it. It’s a good team, with a good pack and a good bench.”

Since losing to Castres, Munster regrouped over the festive period, when Wallace believes they looked more streetwise and composed.

“I’m hoping that they’ve learned how to win these big games, taking the points that are on offer, getting on top through our pack. Our scrum can be devastating, and we possibly undervalue it as a weapon, and likewise our line-out and maul.

“Munster’s backs are to the wall, and it will be tough, but I think Munster have the firepower to do it over there. It’s not a must-win, but it’s as close as you can get.”