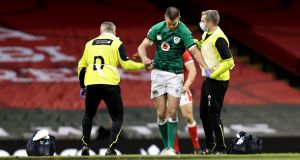 Ireland captain Johnny Sexton gets treatment from Dr Ciarán Cosgrave and physio Keith Fox after taking a hit to the head in the Six Nations game against Wales in Cardiff. Photograph: Laszlo Geczo/Inpho

Johnny Sexton has said he is “saddened and shocked” by what he described as the inaccurate reports emanating from the French media concerning the state of his health and questioning whether he should be permitted to play for Ireland against France in this Sunday’s Six Nations game at the Aviva Stadium (kick-off 3pm).

Speaking to the French radio station RMC, the neurologist who stood down Sexton for 12 weeks when he was playing with Racing in 2014 due to concussion issues, Dr Jean-François Chermann, told the Paris-based radio station RMC: “I think Johnny Sexton has had around 30 concussions across his entire career.”

In light of Sexton being forced off after his head came into contact with the knee of Welsh flanker Justin Tipuric last Sunday in Cardiff, Chermann also said: “The doctor’s role is fundamental here, because if there are symptoms, if his tests are disturbed, the doctor must prevent him from playing on Sunday.”

On Wednesday, Dr Chermann expressed his regret over his comments.

Jean Chazal, a French neurosurgeon, also told Midi Olympique that he had concerns for Sexton’s health in the event of him being picked for this Sunday’s game.

“I’m pretty saddened and shocked by the inaccurate reports that were thrown out yesterday, I think it was,” Sexton told the media in his weekly captain’s briefing.

“We’ve been here before and it is very frustrating and, for me, totally inappropriate that someone I had seen 10 years ago now felt it appropriate to come out and talk to whoever it was and say those things.

“I’m pretty disappointed but for me I am so used to it that it’s almost water off a duck’s back for me. But for my wife and mum it’s very upsetting, but that’s the world we live in.

“I don’t want to talk too much more about it. I just want to focus on this week and the return to play protocols and all that. If I pass and I’m fit to play then it’s up to the coaches then. That’s the way we’ve always done it and the guys here look after us very well.”

The concern of the two French medics would be easier to take if they hadn’t voiced them publicly five days out from an Ireland-France game, or if they had expressed them privately to Sexton. Long since weary of what he once described as “the stigma of concussion” which has followed him around for a few years, given previous comments by Eddie Jones before an England-Ireland game as well, he must feel he’s a free target.

As Sexton suggested, what happened to doctor-patient confidentiality and, as he also said, clearly they weren’t considering his family, for whom such headlines and comments must be profoundly upsetting.

“Yeah, I thought there was a patient-doctor confidentiality. I’m pretty sure that exists in the world and I just can’t get over the fact that someone thought it was appropriate to say things that weren’t even accurate. That’s the most hurtful thing.

“Like I said, I’ve released a statement and that’s all I have to say on the matter. We have been here before and we could sit here and talk about it for 20 minutes. But I’m never going to win out because the last time I did it I tried to give the facts and defend myself and I was in the papers for being selfish and all that to the younger players coming through the system and people accusing me of just looking after myself.

“So I can’t win so I’m just not going to talk about it for the rest of the press conference if that’s okay. I just want to focus on France or we can talk about Wales, with the greatest of respect to you guys.”

Confirming he has passed the daily protocols so far, Sexton added: “I have to do another one today and then tomorrow so we’ll see how it goes.”

Noting the extra interest which there seems to be in him leading into an Ireland-France game, the former Racing outhalf commented: “You get used to it now. It seems to be always the French game coming up that something happens, whether it’s before or after, but look it is what it is.

“Like I said, you get used to dealing with these type of things when you’re captain of your country. It’s a privileged position to be in and sometimes it can wear you down and you need to be reminded that a lot people would swap in for your job, so try and enjoy it. That’s what I have to do despite all the speculation and the attention, and I hope that I try and do a good job. I don’t know if I always get it right.”

In rowing back on his previous comments, Dr Chermann told the RMC website: “In this article it was important for me to make the public aware of the problem of concussions and their management.”

“Regarding my interview on Sexton, I did not want to talk about 30 concussions but concussions and sub-concussions. And if you ask most rugby players, they will tell you that they have also suffered numerous concussions in their career, which moreover are hardly ever declared.

“For Sexton, we can therefore absolutely not speak of 30 concussions. I should not have cited this figure without any explanation and regret the damage I have done to the player who was my patient and whom I respect more than anything.

“And in my experience as a neurologist who has now followed over 1,500 concussed athletes, the most important contraindications for recovery are: having concussions close together, the fact that the last concussion took a long time to go away [several weeks] and the fact that the player is under 20 years old because there is an extremely serious risk of second impact syndrome.

“Clearly, if Sexton hasn’t had a concussion for over a year, that he is asymptomatic at 48 hours, that the tests are good and that the recovery protocol has gone well, there is no contraindication to his playing against France.”