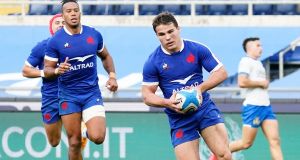 Antoine Dupont starred for France in their win over Italy. Photograph: Dave Winter/Inpho

France’s head coach Fabien Galthie offered the following assessment following the team’s victory at the Stadio Olimpico. “We were efficient with our seven tries and also in our kicking game. After that, there are areas for improvement that we will try to work successfully over the week ahead.”

It represented a fair appraisal of 80 minutes in Rome which panned out as many anticipated in terms of outcome and also to those who would commandeer the spotlight. Antoine Dupont’s performance, his range of skills, his vision and ability to orchestrate his team’s premier attacking moments was a joy to behold.

Teddy Thomas and Brice Dulin in particular, other standouts in that capacity while the French pack dominated in the set-piece. France didn’t have to be overly creative, their hosts gift-wrapping a number of tries, but there was a calm efficiency and ruthlessness when the visitors were presented with opportunities.

There was integrity to the way in which France built into the match initially, a priority initially to try and take some zip out of Italy’s defensive line speed by chipping into space behind the midfield or when necessary, thumping the ball down the pitch, providing structure to style in building pressure; particularly after recognising that the Italians on balance were keen to keep the ball in hand.

The French were lethal on counterattack from turnovers, surging onto misplaced passes, albeit facilitated by some woeful tackling. The home side’s defensive alignment or system was undone by individual frailty time and again as Thomas and Mathieu Jalibert exploited those shortcomings in the build-up to two of the seven tries.

There were flashes of brilliance, Dupont’s exquisite dink for Gael Fickou’s try, his no-look over the shoulder pass for Arthur Vincent’s try, Thomas coming from the blindside wing and accelerating through a gap outside the 13 channel to send his scrumhalf scampering over the Italian line but also more rudimentary qualities.

Gabin Villière demonstrated his football skills in creating a try for Brice Dulin; the former French Sevens wing was very sharp in most things including his work at the breakdown. When properly focused the French scrum squeezed their hosts into conceding penalties - Italy replaced their two props after half an hour - or provided the platform as was the case with Thomas’ second try.

The French lineout maul was impressive, coordinated, powerful, eating up the metres and sucking in defenders. There were glitches though which will give Ireland purchase in their video analysis, areas in which they will feel that the French can be exploited.

Shaun Edwards won’t be overly happy, the French defence coach will have noted that Italy broke the line a little easily at times, that the Italians scored one try and in truth should have had three, one called back for a forward pass and then another chance went abegging when Stephen Varney’s pass cannoned off number eight Michele Lamaro; simple hands would have finished the move with a try.

Italy had a good shape to their attack, players coming from depth and at pace onto the ball and they prised holes, several times with an inside pass but also with a last second changes of angle and footwork. They identified mismatches largely in spaces five metres away from the breakdown, and as their opponents fanned out and came up hard on the outside, they sought soft shoulders on the inside.

What Italy didn’t do was just trundle around the side of rucks, instead carrying the ball in two hands and looking to offload in and through the tackle. They got the French defence to sit down, back on their heels, and this allowed the home side to win collisions based on quick ruck ball.

The 19-year-old Varney was a lively presence at scrumhalf and along with Juan Ignacio Brex, Monty Ioane and Paolo Garbisi proved a real handful for the visitors. The home side demonstrated the value of playing with a high tempo and while they were occasionally a little too east-west in their running lines, thereby eating into their own space out wide, there was plenty to encourage the Ireland coaching team.

France may look to change tack in terms of the breakdown at the Aviva Stadium next Sunday, recognising that they didn’t apply enough pressure and that given the same access to quick ball Ireland will cause them even more problems. They’re likely to be more aggressive in most facets of play.

Ireland are forewarned: kick poorly and be punished, miss tackles and the scoreboard will spin like drums in a slot machine, realign slowly in defence and be sliced and diced. But there was enough to encourage too, especially for a team that can engineer quick ruck ball and possesses the courage to play on the gain-line.