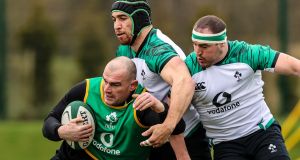 The Irish coaching staff will most likely give Rhys Ruddock his first ever Six Nations start against France on Sunday, or switch Tadhg Beirne to the blindside, in light of the three-match suspension Peter O’Mahony incurred following his 14th-minute red card against Wales.

However, if James Ryan is also ruled out after the head knock which forced his departure in the 25th minute last Sunday in Cardiff, then presumably Beirne will partner Iain Henderson in the secondrow, with Ruddock at “6”.

As Caelan Doris is also sidelined indefinitely due to concussion symptoms Jack Conan was yesterday added to the squad in anticipation of O’Mahony’s suspension.

O’Mahony was sent off for leading with his forearm into the face of Tomas Francis, having incurred the first red card of his career in Munster’s last-ditch win away to the Scarlets last October after being issued with a second yellow card in that game for a similar “cleanout”, as highlighted by Nigel Owens this week.

Owens, who has retired from international referee after becoming the first official to oversee 100 Tests last year but intends to continue to officiate in the Pro14 for the next year or two, told BBC Scrum V: “It was a pretty straightforward decision, really. He did it at Parc y Scarlets a few months ago, he got a second yellow card for something similar. He also did it against the Scarlets in the final about four or five years ago, he got a yellow card for something similar.

“I’m not saying Peter O’Mahony is a dirty player one bit, but he certainly has a bit of history doing that type of action. Players know that you can’t go into situations like that, off your feet, leading with the shoulder, forearm or the head.”

Ryan and Johnny Sexton are also undergoing their return-to-play protocols after being forced off last Sunday with what appeared to be clear cases of concussion, although defence coach Simon Easterby has confirmed they are planning ahead on the premise that both will be available. The announcement of the team has been put back to Friday.

No other outhalves have been called up, leaving Billy Burns and Ross Byrne as the back-up to Sexton, and Easterby maintained the defeat in Cardiff was not down to Burns’s failure to find touch from a penalty with the last kick of the game.

“There were plenty of opportunities for us to have won that game. Yes, it was a critical moment and yes, we have to be better at winning those critical moments and making sure we’re accurate, but we conceded two tries which I feel we should have avoided. We conceded penalties, which again were definitely avoidable.” Easterby put five of the 11 Ireland conceded into that category.

“To put something like the winning or losing of a game on to that one moment is wrong. He is massively upset about the situation and his lack of accuracy in nailing the kick. We would certainly want him to try and get to the five if he can, because it makes such a difference to the quality and the effectiveness of that maul, or the play that is off that, so certainly we want him to have the confidence to go for that if that situation happened again.”

Avoiding unnecessary penalties would also be key in limiting France’s potent attack, as would winning the collisions given their licence to offload.

“It does make it in one sense, a challenge, but in another sense, it’s something that guys actually get really excited about.”

Easterby maintained it was an “easy transition” to switch from forwards coach to defence, and that much of the system was aligned to Andy Farrell’s thinking. Like all defence coaches, he said his philosophy was “essentially about trying to win the ball back first and foremost, and being able to attack from opposition turning the ball over is often some of the best attack ball to have because it’s unstructured”.

While Ireland were effective in wrestling the ball in the tackle or in the jackal against Wales, they were then too often wasteful with the turnover ball.

Ronan O’Gara has said the problem facing Ireland on Sunday is that “the best player in the world is going to be around the ball so often”, in reference to, of course, Antoine Dupont.

“When you’ve got a ‘9’ like Dupont, if you can prevent the opposition getting that quick ball, prevent the offloads, take away the options in the way they want to attack, then someone like Dupont becomes less effective,” ventured Easterby.

“At times we did have an effect on their speed of ball in Paris,” he added of the 35-27 defeat last October, “but other times we probably fed them too a little too much, through off-loads, falling off things and eventually they took advantage of some of our defensive errors.”

In concentrating so much on Dupont, there’s also a danger in leaving space for others, not least Matthieu Jalibert.

“Dupont is world class,” admitted Easterby. “He makes France tick. They have got a number of very, very good players in their ranks as well so we also have to really focus on what we can prevent him from doing but I think it is a collective thing that allows us to negate France’s threat, because if we focus on him only then we could offer space and opportunities for other players that can strike off him.”