Devin Toner ruled out for two months after ankle surgery 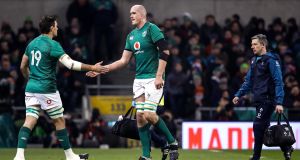 Devin Toner is replaced by Quinn Roux during the Six Nations defeat to England at the Aviva stadium. Photograph: Dan Sheridan/Inpho

Secondrow Devin Toner will miss the rest of Ireland’s Six Nations campaign after undergoing ankle surgery that will keep the Leinster player out for two months.

The 32-year-old aggravated an existing issue in last weekend’s 32-20 defeat by England in Dublin.

The recovery period would also keep him out of Leinster’s Champions Cup quarter-final against Ulster on Saturday March 30th.